The idea of a stylish MPV might sound counter-intuitive, but the Renault Scenic is intended to be just that. With smooth lines and stylish touches on the outside, it’s a world away from the utilitarian boxiness of most MPVs, with the result that it stands out from the crowd. Some might even call it handsome.

But buyers value flexibility, versatility and space in this market, so good looks are only advantageous if they don’t compromise practicality. So can the Scenic hold its own in matters of the head, as well as the heart?

At launch, the Scenic was available with a slightly complex engine range consisiting of two basic engines: a 1.2-litre petrol and a 1.5-litre diesel. The former was available in 113bhp and 128bhp forms, while the latter came in 94bhp, 108bhp and 158bhp outputs. A dual-clutch automatic gearbox was available on the latter two engines. There was also a Hybrid Assist variant based around the 108bhp version, with a small electric motor and battery that provided an extra boost to the diesel engine, improving efficiency and performance.

In 2017, the 1.2-litre engines were replaced with more responsive 1.3-litre versions, of 113bhp and 138bhp power outputs, and an automatic gearbox was made available on the more powerful of the two.

Four main models make up the range. Expression+ is the cheapest, with dual-zone climate control, Bluetooth and a digital radio all coming as standard; Dynamique Nav adds, as its name suggests, sat-nav, as well as folding picnic tables and front and rear parking sensors; Dynamique S Nav then gives you a colour, touchscreen infotainment system and a panoramic roof, while Signature Nav tops out the range with such refinements as leather seats and LED headlights.

The Scenic’s huge windows make it feel very spacious up front, but further back things aren’t so good. The floor is strangely high and the rear seats are mounted low, which means if you sit in them, your knees are forced upwards and your legs feel cramped – there’s certainly less space back here than you’ll find in a Volkswagen Golf SV or Citroen C4 Picasso.

The portrait-oriented touchscreen you get on higher-spec Scenics is a sensible idea because it gives you a great view of the way ahead when you’re using the sat-nav. Sadly, the menus you use to navigate the system are labyrinthine and tricky to use, and there are only a couple of shortcut buttons, meaning you find yourself having to chop and change between menus whenever you want to adjust something.

Similarly flawed is the dashboard itself. It’s quite nicely styled, which means it looks good at first, but look closer and you find hard, cheap-looking plastics lower down. And while you get smart-looking TFT screens instead of traditional gauges, you can’t change their function like you can in the virtual cockpits you’ll find available on some rivals.

The news doesn’t improve out on the road because, in both petrol and diesel form, the lower-powered engines struggle to lug the Scenic’s heft around, even when it’s empty. Upgrading to a more potent version helps but, even then, there are rivals that do it better.

The same goes for the ride and handling balance too, because the Scenic has been given very soft suspension, presumably in order to compensate for the thin, bump-transmitting tyres fitted to the massive alloy wheels. It does its job reasonably well, but the problem is it also results in sloppy behaviour in corners, where the Scenic pitches and rolls like a brigantine on a storm swell. Together with the numb steering, this makes for a car that’s rather unpleasant to drive at anything other than a pedestrian pace.

One thing the Scenic does have in its favour, though, is a good safety record. Under the 2016 Euro NCAP test regime, its five-star score is a strong result, bolstered by impressive ratings of 90% and 82% in the adult and child occupant tests respectively.

Find a used Renault Scenic in the What Car? Classifieds here 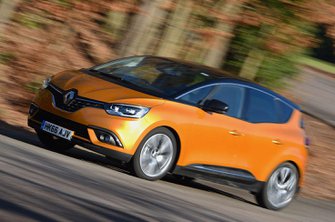