Some people, wrongly, as it turns out, believe that Ford builds its vans in Britain. Unfortunately, full production of the Transit switched to Turkey in 2013, leaving just one commercial vehicle manufacturing facility left on these shores: the Vauxhall Vivaro factory in Luton.

Much is now made of the Vivaro’s “Built-in-Britain” status, and understandably so. Since the PSA Group bought Vauxhall, Luton has convinced its new owners of its worth and secured another 1400 jobs to build the current Vivaro. But here we’re going to take a look at the version it replaced, the previous-generation Vivaro, a van that was, in its day, one of the most popular on the market.

Anyone after an automatic gearbox will have to look elsewhere though, because all Vivaro’s use a six-speed manual. However, you can choose from two 1.6-litre diesel engines: a single turbo version available with 94bhp or 119bhp, and the CDTi BiTurbo, with 123bhp or 143bhp, all of these the later Euro 6 versions, introduced to the range in 2016.

Like its biggest rivals, the Ford Transit Custom and Citroën Dispatch, it’s also available in two lengths and two heights – as are the closely related but French-made Fiat Talento, Nissan NV300 and Renault Trafic. Meanwhile, other versions of the Vivaro include a double cab van and a Combi minibus that can seat up to nine.

Vauxhall offers just two trim levels – Vivaro and Vivaro Sportive. The standard Vivaro gets a DAB radio with USB connectivity and Bluetooth, in addition to steering wheel-mounted audio controls, stability control and a trip computer. However, it’s the Sportive that you should really be looking at, because this adds air conditioning, LED daytime running lights, cruise control, parking sensors, the all-important load-through bulkhead, and metallic paint with colour-coded bumpers.

Keyless entry and start are options, as is a Navi 80 IntelliLink sat-nav system. It has free TomTom Live traffic updates, but best of all it declutters the central dash replacing all of the radio controls with a 7.0-inch touchscreen.

On the road, there’s a clear difference between the four engine outputs. The 94bhp is understandably a little lacklustre when loaded but is fine for light work. However, the 119bhp is a significant improvement, which is why we also recommend its slightly modified sibling in the Mercedes Vito. Sadly, for Mercedes, it doesn’t get the twin-turbo engine because while the 119bhp is good, the 123bhp is excellent; there’s a wide power band, including 236lb ft of torque from very low down, plus it returns 47.1mpg in the older NEDC official tests. We’d actually choose it over the 143bhp version. True, the Ford Transit’s 2.0-litre engine seems to have the upper hand on paper, with 128bhp or 168bhp, but in reality, it’s the Vivaro that’s the better performer; it’s quieter and has a smoother power delivery.

Where the Vivaro isn’t as good as the Transit is in the way it handles, feeling less agile. Yet it still behaves well, with an accurate turn-in and a well-balanced ride that is on the firmer side, but not overly harsh.

It’s just a pity the gearchange is a touch notchy and wind noise is more noticeable than in other vans.

All Vivaros come with a fully adjustable driver’s seat and steering wheel, which makes it easy to find a comfortable driving position. What’s more, visibility is great, aided by the option of a wide-angle passenger mirror within the sun visor; with practice you can flip this down to the right angle very quickly and get a much clearer view of any approaching traffic should you come to an awkward junction.

Just don’t expect the Vivaro to feel as classy as the Volkswagen Transporter, because the plastics are noticeably coarser. The instruments are a little odd, too – they’re reminiscent of staring down a pair of binoculars – but they do at least give plenty of information.

There’s also a lidded upper glovebox on the passenger’s side – a rare and valuable feature for keeping valuables out of sight but close at hand – but otherwise storage is limited to one large central dash area suitable for folders or papers, a conventional lower glovebox and rather shallow door pockets.

Van makers usually keep their rear load spaces pretty consistent between generations, but when this Vivaro was updated in 2014, Vauxhall increased the length and as a result the overall capacity. It was extended by 216mm to 4998mm and 5398mm for standard and long-wheelbase models respectively, while storage lengths range from 2537mm to 2937mm.

At the same time, a load-through bulkhead – introduced first by Ford but now adopted almost universally across mid-sized vans – that allows items to pass under the passenger seat and right into the footwell extends maximum carrying length in short-wheelbase models from 2537mm to 3750mm and in long-wheelbase variants from 2937mm to 4150mm.

The maximum load volume of 8.6m3 is fractionally more than the biggest Transit Custom offers (8.3m3). Meanwhile, payloads of up to 1056kg are possible in short-wheelbase vans rated at 2.74 tonnes and 1246kg in the heavier 2.96-tonne gross vehicle weight models.

A passenger-side door is fitted as standard and the rear doors open to 180-degrees, but if you have the longer L2 body they can fold flat along the sides which really improves access. 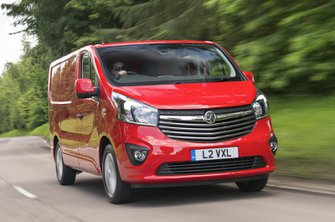