Even entry-level SE versions get adjustable lumbar support and an electrically operated backrest, with manual adjustment for everything else. A 14-way electrically operated driver's seat is an option on most trims. In truth, all Passats offer lots of scope for tailoring your driving position, including a good range of reach and height adjustment to the steering wheel and a height-adjustable centre armrest, so it's easy to stay comfortable on a long trip.

The dashboard buttons are simple to operate and the standard analogue instrument cluster is easy to read. You can upgrade this to a 10.3in digital screen that shows more information, such as sat-nav mapping; it's a pricey option, but one that’s worth considering for its ease of use and the breadth of information it provides.

The Passat is up there with the class best when it comes to front visibility, but its long boot does make things tricky to judge when reversing. Still, even the entry-level SE comes with front and rear parking sensors as standard and you can add an automatic parking system: this determines whether a parking space is big enough and steers the car into it for you. Rear-view and 360deg camera systems are also available for extra guidance when manoeuvring.

Bright LED headlights are standard on all trims and adaptive Matrix headlights, which can automatically shape their light field to avoid dazzling oncoming traffic while remaining on high beam, are optional on most of the trims. They're very good, but extremely pricey. 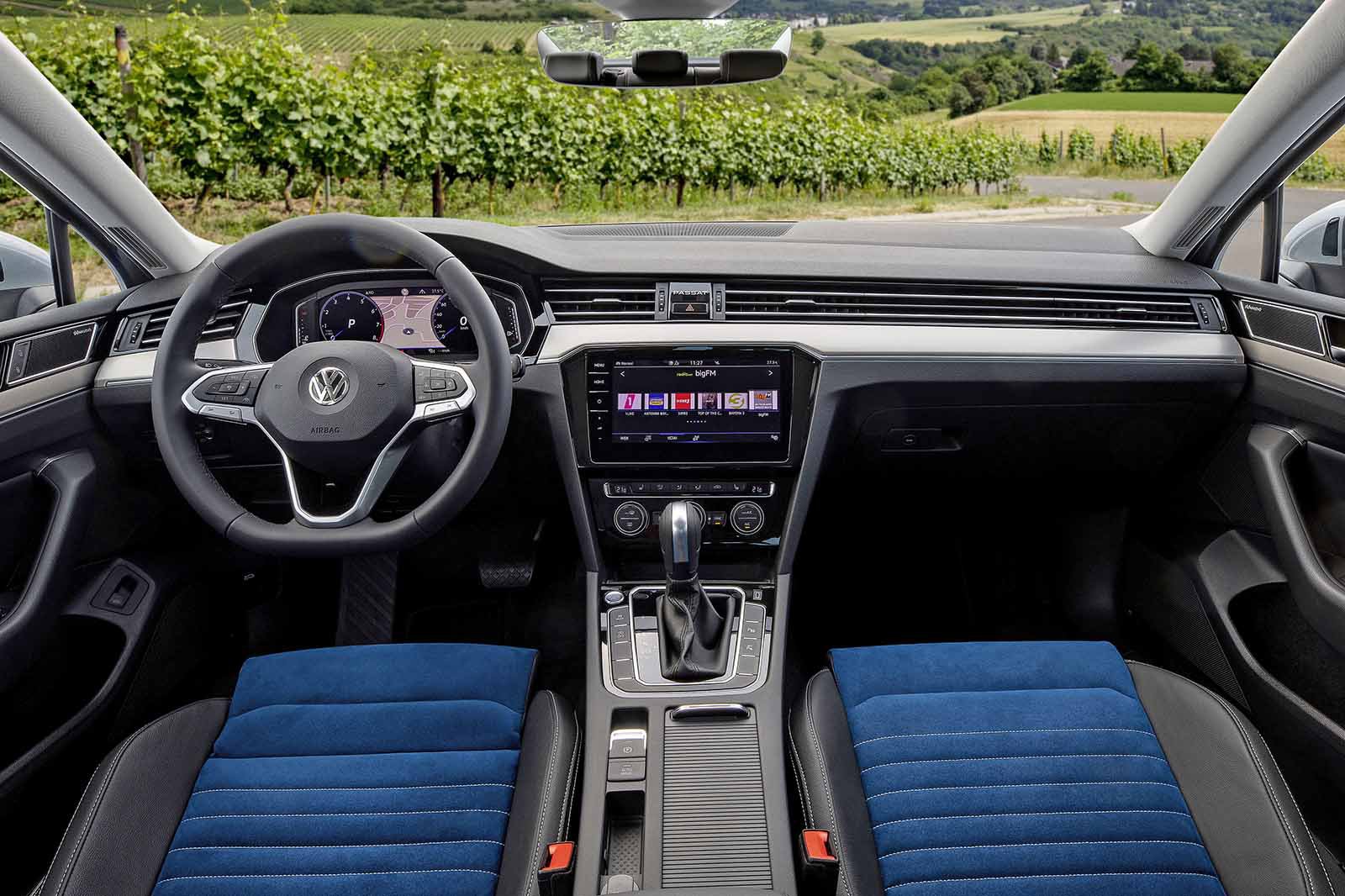 All models have Bluetooth and a DAB radio, controlled via a 6.5in touchscreen on SE trim, or a crystal-clear, 8.0in colour touchscreen on SE Nav, SEL, R-Line and GTE trim. Apple CarPlay and Android Auto smartphone mirroring are standard, connecting wirelessly like in the BMW 3 Series, rather than via a USB cable as in most of the Passat's rivals. Sat-nav is standard from SE Nav trim upwards.

The Passat's straightforward menus are easy to navigate, helped by shortcut buttons on either side of the display. The screen responds quickly to your touch and the graphics are high quality. Unlike BMW's excellent iDrive system, though, there’s no physical rotary controller;  such interfaces provide a much handier method to operate an infotainment system while you're on the move. At least the Passat doesn't just rely on distracting touchscreen icons; its two physical knobs allow quick access to the volume control and a more intuitive way to scroll through lists.

A bigger, 9.2in touchscreen is standard on GTE Advance and R-Line Edition, and is optional lower down the range. This adds more functionality but its benefits aren't worth the additional cash; in fact it’s a backwards step in some ways, doing away with physical controls altogether. The standard stereo comes with eight speakers, but audiophiles might want to try out the punchier Dynaudio premium system; it has 700 watts of power and plays through 10 speakers.

Inside, you'll find a variety of dense-feeling materials that, along with eye-catching details such as chrome highlights and a smart analogue clock, make the Passat look and feel more upmarket than the Vauxhall Insignia or Ford Mondeo. Any scratchy plastics are confined to surfaces lower down on the doors and centre console.

That said, the Passat isn't as swish inside as a BMW 3 Series or the outstandingly well-made Audi A4.