To anyone familiar with modern Volvos it should have come as no surprise when the covers were taken off this sharp-looking V90 in 2016. After all, the time of the utilitarian estate had long since given way to the era of the lifestyle estate: modern Volvos are designed to appeal to celebrity vloggers, not antique floggers.

Based on the luxurious and upmarket S90 saloon, the V90 takes all that we expect from the Swedish firm – the premium feel, the high-tech efficiency and the unquestionable reputation for safety – and adds in abundant style. For more weekend fun, there’s also a raised-up and more rugged four-wheel-drive Cross Country version for mild off-road use.

To say it's stylish doesn't really do it justice – for a large estate it's extremely handsome. If anything, it gets even better the more of it you explore; it makes those previous utilitarian estates seem distinctly old-fashioned. One thing it hasn't dismissed, though, is Volvo's reputation for safety, which continues in this car with a whole host of innovative, high-tech kit.

Under the bonnet, engine choices are a pair of 2.0-litre diesels (D4 and D5), and a couple of 2.0-litre petrols (T4 and T5), along with a powerful petrol-electric plug-in hybrid (T8). The V90’s 232bhp D5 diesel engine uses a clever compressed air system to help the turbocharger kick in more promptly, although it still isn't quite the equal of the equivalent Mercedes E220d. The lower-powered 187bhp D4 isn’t as quick, but it has enough shove to cope with the V90's bulk and is more economical. Both engines can be a little gruff when cold, and the eight-speed automatic gearbox is a little too hesitant.

The 385bhp T8 is a petrol-electric hybrid that’s extremely quick to accelerate and shuffles between power sources easily. There's also a 187bhp T4 and a 247bhp T5 for petrol engine lovers, the T5 being the better of the two because the T4 is a little down on low-rev torque, and will need to be thrashed more in the real world to make similar progress to the more powerful T5.

For 2020, Volvo added mild hybrid technology to the V90's engines. The system combines a 48V battery with an integrated starter/generator and energy recovery system, capturing kinetic energy during braking or coasting and using it to boost overall efficiency. Theses engines started with a 'B' to distinguish them from the regular 'D' and 'T' engines.

The V90, in all its guises, is a peaceful cruiser, although not to the extent that it can match the whisper-quiet BMW 520d Touring. Engine noise in the diesels is the biggest nuisance; at idle, there's a mild rumble that seems out of sorts with a premium wagon, but this fades to a reasonable background thrum on the move. The T4 petrol engine is a touch coarse, but the T5 and T6 are hushed unless you're really thrashing them. The T8 is virtually silent when running on electricity, while the car’s petrol engine is much more refined than the diesels.

It’s comfortable, too, on all manner of roads. Ride comfort is crucial in family estates, and this is another area in which the V90 impresses, especially if the original owner ticked the box for the optional adaptive dampers that includes air suspension at the rear. It helps the V90 glide along motorways with a relaxing buoyancy and rides over most surfaces at town speeds in a composed fashion. Its motorway refinement is excellent, although it’s fair to say it can’t quite match its sporty rivals when it comes to handling finesse.

As mentioned, it’s certainly distinctive and eye-catching from the outside, and things are even better when you step inside: it’s spacious, stylish and impressively plush to compete against those premium models from the German brands, including the very capable BMW 5 Series Touring, Audi A6 Avant and Mercedes-Benz E-Class Estate.

The V90's Sensus infotainment system features a 9.0in portrait touchscreen, through which you control many of the car's functions. At times it’s unresponsive and hard to find what you want within the vast array of menus and functions, and trying to press the some of the smaller icons while driving is pretty tricky.

Volvo’s seats are famous for their supportiveness and the V90’s are no different, while wide-ranging electrical adjustment, including for lumbar support, make it easy to get settled. The sports seats in R-Design trim are particularly good, keeping you secure between their enhanced side bolsters during hard cornering.

The Volvo V90 is superb at accommodating four adults. Those in the front get loads of head and leg room, and it’s the same in the rear, with class-leading knee room back there. It's more of a squeeze width wise for three larger adults sat in the rear, but three children can sit side-by-side perfectly happily.

Although the V90's 560-litre boot all but matches that of a BMW 5 Series Touring in volume, the reality is it struggles to fit eight carry-on suitcases that fit easily in its rival. It’s smaller still next to the A6 Avant's boot and thoroughly thrashed by the carrying capacity of the E-Class Estate. 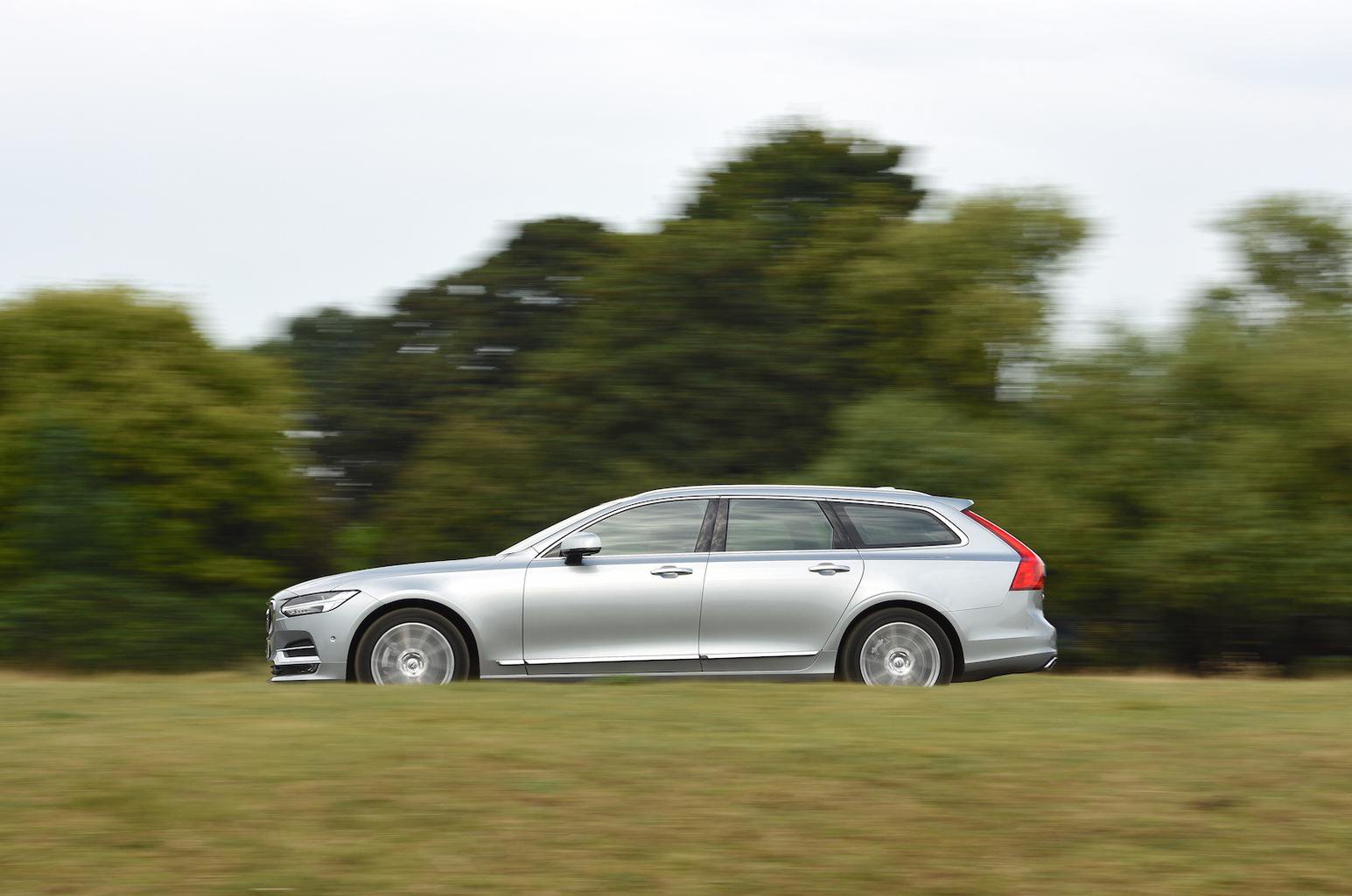 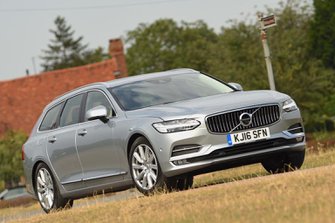