It might rank as the understatement of the decade to say that when the DB11 was launched in 2016 it was a fairly important car for Aston Martin. Never a company to prosper with quite the financial success you’d imagine a maker of highly desirable and rather expensive sports cars to do, the DB11 arrived at what could definitely be called a make or break time for the British firm.

Luckily, it was liked, by the press, by the public and by the people who bought it, so all the work Aston put in to this new car was certainly justified. It sits on a brand new platform, for one, and it borrows a lot of technology from its partner, Mercedes. The DB11 is mostly made from aluminium, too, which is light, except where it’s made of magnesium, which is even lighter, and on top of that a lot of work went into making its graceful and arresting shape aerodynamic, so that it not only looks like a million dollars it goes like it too.

Under its voluptuous bonnet sits a choice of either a twin-turbo 4.0-litre V8 or a 5.2-litre twin-turbo V12.

There is only the one trim option, and it comes suitably well equipped, with heated, electrically adjustable leather seats, climate control, keyless entry and start, cruise control, front and rear parking sensors, a 360deg parking camera, a DAB radio, sat-nav, an 8.0in infotainment touchscreen, LED headlights and an Alcantara headliner, among other things.

On the road, it’s fair to say this car marked a return to form for Aston. The two engine choices both sound glorious, and it responds to the pedal with either unit with alacrity. It’s fast and fun, and oddly, as it’s the cheaper version, the V8 is the most entertaining. That’s because it’s lighter than the V12 and lightness is a good thing when it comes to handling.

In bends, the DB11’s body stays relatively flat, and the V8 is sharper to turn in and it feels much nimbler scything through a challenging series of corners than the V12, or, for that matter, the Mercedes S-Class Coupe or the Bentley Continental GT.  It steers better, too. The steering is quick, but not so fast around the straight-ahead that it feels nervous at motorway speeds, and it transmits a pretty well-defined impression of the road straight to the palms of your hands. This supplies you with the confidence to know when the front tyres are either gripping or about to take you wide.

The suspension has adaptive dampers as standard, and these deliver a good spectrum of modes, from softest GT through Sport and Sport +. In its softest setting, the DB11 isn’t as pliant as the S-Class Coupé or Continental GT – you feel a little more shimmy over rippled sections of motorway, and a firmer bump across potholes in town – but it’s perfectly acceptable.

Inside, the driving position is spot-on. There’s plenty of adjustability in the seat and steering wheel, though visibility is limited by those stylish thick pillars. Fit and finish retain the best bits from Aston Martins of old. Soft, hand-stitched leather sits side-by-side with wood or carbonfibre trim highlights, and all that looks like metal in the interior really is metal, including the air vents, for example. Space up front is fine, but as you might expect taking in that rakish profile the rear seats are best reserved for tiny children or suitcases. Speaking of which, the boot is a little on the small side, although you can squeeze in a couple of overnight bags.

Of course, there were still some buyers who felt a ‘proper GT Aston’ should always have a V12, but those were in the minority - thus the V12 was discontinued in 2019. However, as it turns out, Aston didn’t really discontinue the DB11 V12 after all, it simply replaced it with a new model: the DB11 AMR (AMR standing for ‘Aston Martin Racing’). And to put it simply, it’s the car the DB11 should have been all along.

If you're interested in finding a used DB11, or any of the other cars mentioned here, head over to the Used Car Buying pages to find lots of cars listed for sale at a great price. 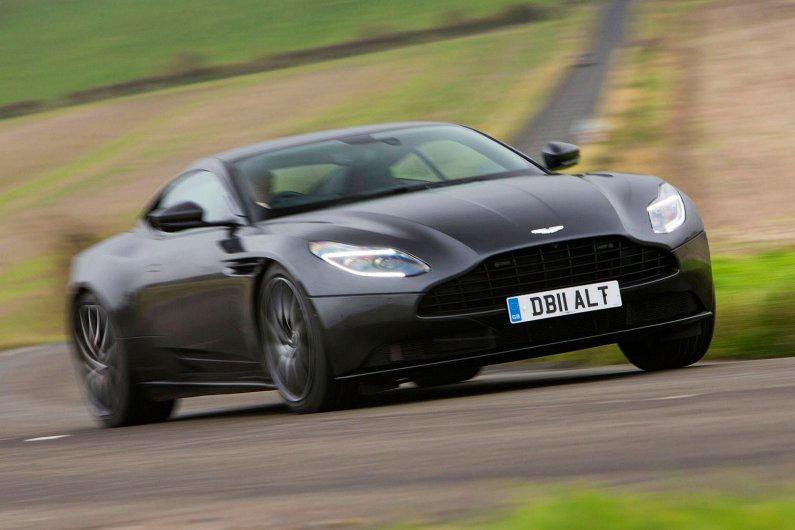