You might think that a large and luxurious grand touring coupé made by Bentley would be an instant winner, but when the first version of the car was launched in 2003 there were some – ourselves included – who weren’t so sure about it. Doubts about its weight, performance, handling and ride, not to mention its expense, dampened our enthusiasm.

Most of these issues were addressed in a facelift in 2011, when this lighter and rejuvenated model first appeared. Chief among the changes was the introduction of a 4.0-litre V8 engine to accompany the massive 6.0-litre W12. This impressive unit makes the Continental lighter, more agile and more economical while losing little in terms of performance or refinement. Both cars still offer an unimpeachable ability to waft around town or up motorways in near-silence, with just a background woosh from road and wind noise to remind you that you’re moving.

The luxurious interior offers just about every electrical option you’d want (never mind need). Everything is trimmed in polished wood and soft leather, and the quality of the fixtures and fittings is exemplary. Space is great up front, with electrical seat and wheel adjustment, and two small adults or children will be happy in the rear for short distances.

The Continental is a big and classy grand tourer that, we think, offers enough to justify its price differential over a number of other wonderful cars in this class. Of course, its running costs are huge, but its sense of occasion is nearly unmatched. How does it stack up as a used buy? Read on to find out. 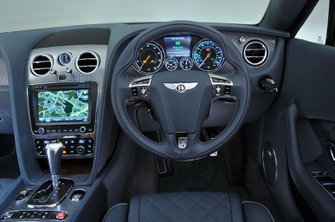