The old adage runs that the difference between a Rolls-Royce and a Bentley is that the former is a car in which to be driven, whereas the latter is a car you drive yourself. Well, the Bentley Flying Spur is intended to straddle those two worlds. This luxurious saloon aims to take the driving experience of the closely related Continental GT coupé and convertible, and combine it with a four-door body that offers enough space in the rear should you wish your chauffeur to chauff on occasion.

All Flying Spurs get xenon headlights, dual-zone climate control, sat-nav and a lavish interior with more walnut, leather and burnished chrome than you can shake a stick at. But it’s worth shopping around to find your ideal specification, as the list of personalisation options was extensive and many owners will have made their cars their own.

As you’d expect, though, that interior is an incredibly comfortable and opulent place to be, with top-quality materials as far as the eye can see. The rear seats can be had either as a bench of three with a small middle seat, or as two more commodious bucket seats with electric adjustment. Either way, there’s loads of room for four adults, though five is a bit of a push in the former configuration, and the boot isn’t as sizeable as you’d expect.

But while it might be luxurious inside, the Bentley also feels terribly old-fashioned. The infotainment and dashboard screens are low-resolution, and the former is extremely sluggish to respond and looks archaic. You can forget the idea of a TFT screen in lieu of the dials too – the Flying Spur is simply too old.

It’s a big car, too, and you feel it as soon as you take the wheel. You sit at an imposing height, which gives you a decent view out, but guiding the Flying Spur through width restrictions and tight gaps can be a heart-stopping experience until you get used to its size.

Its weight also compromises the ride and handling; even in the standard car, the Flying Spur isn’t as smooth as a car like this should be – you’ll find the Mercedes S-Class and Audi A8 both better it in terms of ride comfort by some margin. The S versions, meanwhile, have an even tauter ride, which allows thumps and tremors through to the cabin more often than it should. And while the Flying Spur remains composed and neat through corners, its numb steering, weight and sheer size mean it isn’t all that involving.

Happily, the ride smooths out on the motorway, making the Flying Spur a splendid cruiser. Indeed, the well-damped wind and road noise only add to this effect – as does the hushed engine, although if you’re in the mood, you can provoke any Flying Spur into a glorious bit of aural virtuosity with no more than a stiff prod of the accelerator. 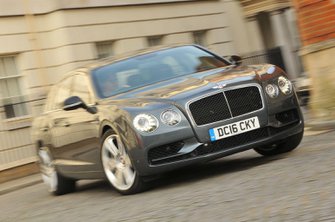