It may hurt those at Rolls-Royce and Bentley to hear this, and BMW certainly won't be pleased, but if you were taking a poll to find the car that could lay claim to the title of the best in the world, most of the votes would probably go to the Mercedes-Benz S-Class.

For many years, this flagship model has showcased new technologies and electronic innovations that have in due course trickled down into far more humble vehicles. It has also embodied the last word in luxury, pace and refinement, proving along the way as good to drive as it is to be driven in.

When this latest iteration of the S-Class was launched in 2014, it carried on all those traditions and won all the plaudits. It was loaded with some astonishingly clever kit that could scan the road ahead for bumps and then adjust the suspension accordingly, plus semi-autonomous driving technology that could utilise sat-nav data to slow you down and steer you around bends.

So advanced was it that it almost came as a shock to discover that under its bonnet was a range of quite traditional petrol and diesel engines, albeit with some more on-trend hybrid options, too. The lone diesel is the S350d, while the petrols range from the 4.7-litre V8 in the S500 up to the V12-engined S600. There’s also a petrol-electric hybrid known as the S300h and a plug-in hybrid called the S500e.

As part of its facelift in 2018, the S-Class received a set of new engines aimed to maximise efficiency. The 3.0-litre diesel straight six became available in two states of tune: the S350d and the more powerful S400d. The petrol range benefitted from mild hybrid technology on the S450 and S500 models, while the S560e plug-in hybrid gained an electric-only driving range of roughly 30 miles between charges. AMG continued to fit a turbocharged 4.0-litre V8 in the S63 and a turbocharged 6.0-litre V12 in the S65.

Trim levels tend to be assigned to whichever engine you choose, but some give you the option of AMG or AMG Line trim. Both are more than well-equipped, as you might imagine, with AMG Line giving you keyless start and entry, cruise control, 19in alloy wheels, front and rear parking sensors, a rear-view camera, metallic paint, adaptive LED headlights, heated, electrically adjustable leather front seats with lumbar adjustment and a memory function, the Comand Online infotainment system with two 12.3in screens, sat-nav, Apple CarPlay, Android Auto and a wireless smartphone charger, among a host of other delights.

On the road, the S-Class is, for a car of its size and weight, exceptional. Performance with any of the engines in situ is more than adequate; even the S350d can get from 0-62mph in just 6.0sec. The S500 does the same sprint in a mere 4.8sec, which is faster than most sports cars, while the S600 and the AMG pair are even quicker still. All S-Classes have a nine-speed automatic gearbox that works smoothly and quietly and shifts almost imperceptibly.

The S-Class also has one of the best rides, not just in this class but overall. True, there is a slight reverberation over broken surfaces around town, but it glides beautifully most of the time, being supremely supple and comfortable. It handles well, too, utilising all the technology it carries to corner with verve, especially so for a luxury limousine. The steering is precise and you'll find plenty of grip.

But it’s in terms of refinement that the S-Class shines brightest. Few other cars can waft like it, making it sublime on the motorway.

Inside, it’s even more impressive. It’s awash with all the kit you could want, never mind need, and provides a great driving position with good visibility. All the major and minor controls are logically placed, work with a well-damped action and have a high-quality feel that few rivals can match. All models get a crisp 12.3in infotainment display that’s intuitive to operate, via touch or a rotary controller.

There’s plenty of space up front and masses in the back, too, especially with the long-wheelbase chassis, which is standard on all variants bar the S350d. And there’s a large boot that's more than adequate for a week’s worth of holiday luggage, although the S500e and S560e plug-in hybrids have smaller boots (395 litres and 410 litres) because their batteries required take up some space. 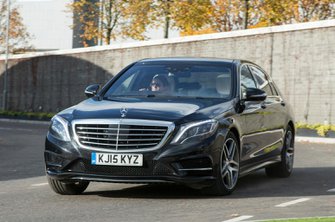