The recipe for the BMW 4 Series is really very simple. Take a freshly baked BMW 3 Series; lop off two of the doors, smooth out the roofline and add a little extra girth around the edges. Hey presto: a two-door coupe that, while obviously owing plenty to its saloon progenitor, nevertheless looks the part.

Add in to that a pretty comprehensive range of engines. The petrol options comprise the 420i and 430i, which are both turbocharged 2.0-litre fours making 181 and 248bhp respectively, and the later 440i version with its 321bhp turbocharged 3.0-litre six. Diesel choices are, unsurprisingly, the more popular. It kicks off with the best seller, the 420d. With outputs of 181bhp and 124g/km of CO2 it's the model most frequently found on the motorways, and the one that has found favour with company car drivers. The remaining diesel models both share the same turbocharged six-cylinder block, but while the 430d makes 255bhp, the 435d develops 309bhp, making it the most accelerative model in the range.

Six-speed manual gearboxes are standard across the range; an eight-speed automatic is optional. Four-wheel drive 'xDrive' is standard on the 435d, and was an option on other models.

The engine range was revamped in 2016, with the range-topping 435i dropped in favour of the newer and previously mentioned 440i model, as well as some detail efficiency and performance tweaks to several other engines in the range; a facelift in 2017 brought some very minor styling tweaks and specification changes inside and out.

At launch, the BMW 4 Series model line-up started with the SE version, then continued up through Modern, Sport and Luxury models to the priciest M Sport. As time went on, Modern and Luxury versions were dropped, as eventually was the SE, leaving only Sport and M Sport versions left over.

There are now just those two trim levels to choose from, while those wanting an M4 get a bespoke spec. The entry-level Sport trim equips the 4 Series with 18in alloy wheels, gloss black exterior trim, dual chrome exhausts, LED head, rear and fog lights and parking sensors as standard on the outside. Inside the 4 Series gets dual-zone climate control, heated front seats, a Dakota leather upholstery, interior ambient LED lighting and BMW's brilliant iDrive infotainment system complete with sat-nav, a DAB radio, Bluetooth and USB connectivity, BMW's online services and a 6.5in screen.

Upgrading to M Sport adds an aggressive bodykit, sports suspension and interior touches such as door sills and an M Sport steering wheel, alongside BMW's Professional Media pack. Opt for the monstrous M4 then you have two core trims to choose from - standard and Competition Pack. The regular M4 gets 19in alloy wheels, active differential, adaptive suspension, quad-exhaust, an 8.8in iDrive display, cruise control, wireless charging dock and automatic lights and wipers as standard.

Opt for the competition pack to your M4 and you get 20in alloys, a loudspeaker system, a tweaked adaptive suspension set-up with specific springs, dampers and anti-roll bars and reconfigured active differential, driving modes and traction control.

But it’s in its driving experience that the 4 Series Coupe really stands out over rivals such as the Audi A5 and Mercedes C-Class. Responsive, accurate steering means the nose is easy to point in whichever direction you might desire; what’s more, rear-wheel drive means the 4 Series has a sense of balance that few coupes can replicate, while the low centre of gravity means that the 4 Series always feels planted and secure even in high-speed bends.

What’s even more impressive is how well the 4 Series manages to factor comfort into the equation as well – although we’d recommend sticking to the smaller wheel sizes because the larger wheels with their skinnier tyres start to make things feel a little lumpy. Choose carefully when you’re picking which engine you want, too; while there’s a huge choice, the smaller engines can be rather noisy.

The 4 Series isn’t just a class act on the outside, though; within, you’ll find a suave interior that’s laden with high-quality materials and an easy-to-use infotainment system. It’s roomy in there, too, thanks in part to that saloon car lineage; you’ll find rear seats with space enough for two adults to spend a journey in reasonable comfort, while up front there’s oodles of space and lots of neat little cubbies in which to store bits and bobs. 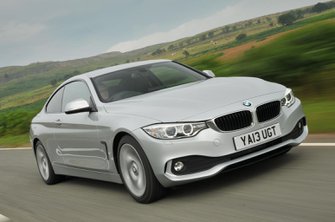