By SUV standards, you don’t sit particularly high in the Jaguar I-Pace, but even entry-level S models have part-electric adjustment to help drivers of different sizes get comfortable, while the seats in pricier versions are fully electric and have a memory function. The standard sports seats in the front look great and offer lots of support, aiding comfort over long distances.

All I-Paces forgo traditional analogue instrument dials for a slick 12.3in digital display that lets you decide what information is displayed directly in front of you.

The S trim has a touch-sensitive panel low in the centre console to control functions such as the air conditioning. That’s replaced by a 5.5in touchscreen on higher trim levels (you can add it as an optional extra with S trim).

Both systems look tidy, and the touchscreen is rather flash, but it can be distracting to use while driving; you’re forced to take your eyes off the road to find the control you’re searching for. Fortunately, they are complemented by two physical dials for adjustments to seat heating, air-con temperature and fan speed; these are preferable to the touch-sensitive heating controls in the Audi E-tron.

Forward visibility is good, but thick rear pillars and a shallow rear window (with no rear windscreen wiper) restrict your view of what’s behind.

It’s fortunate, then, that you get a 360deg camera and rear cross-traffic alert as standard. However, the rear camera display can be a bit laggy and can give the impression that you’re approaching an obstacle much faster than you actually are.

As an optional extra, you can also add ‘ClearSight’, which enables you to turn the rear-view mirror into a screen that displays the view out of the back of the car. Because this is based on a feed from an external camera, it’s unaffected by a dirty rear window or passengers blocking the view. 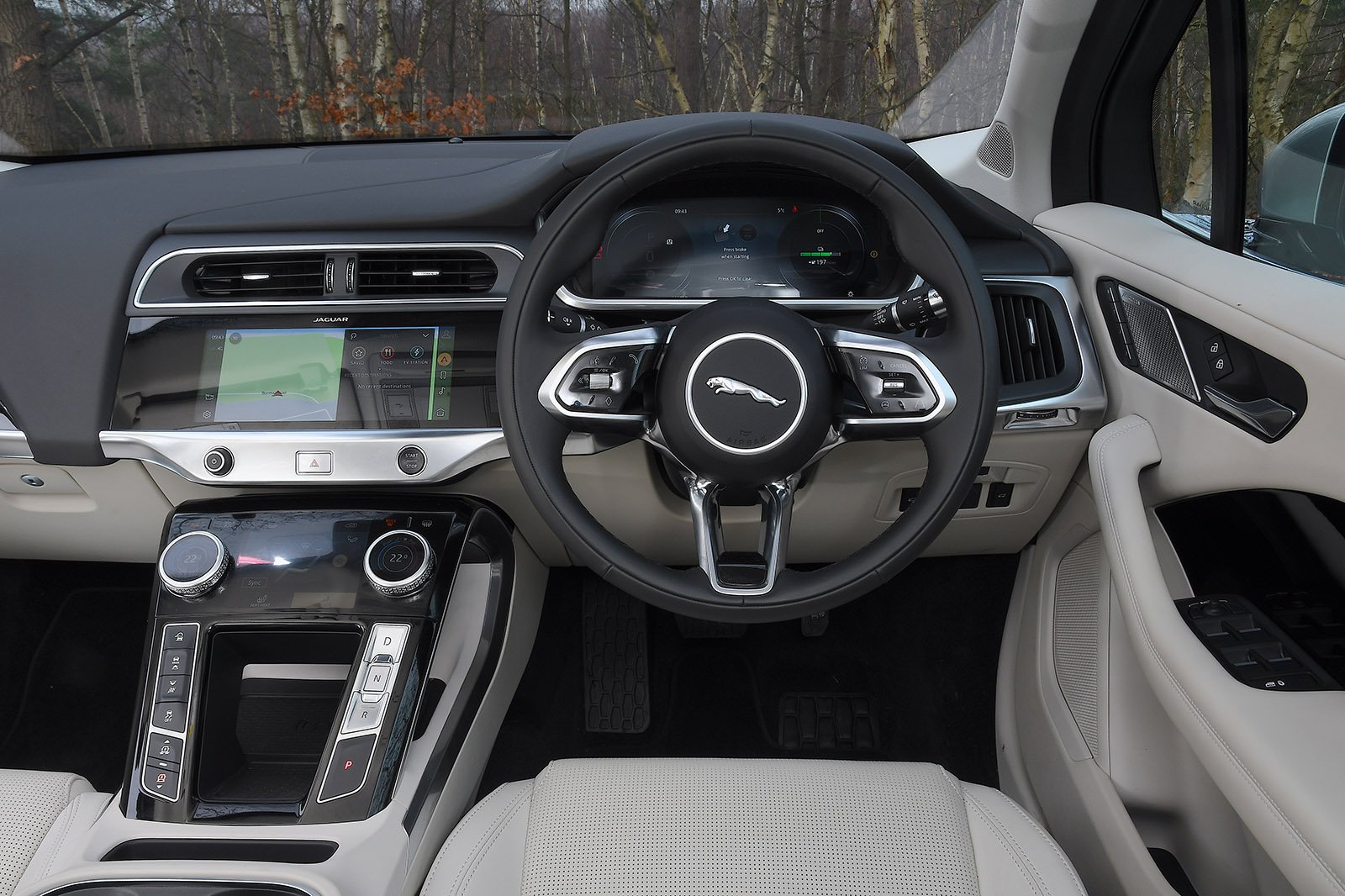 As in other modern Jaguar cars, central to the upper dashboard of the I-Pace is a large, 10.0in touchscreen on which you can access the sat-nav, phone and stereo functions.

It dominates the interior but is nowhere near as big as the enormous tablet-style screen found on Tesla models. Nor is it as responsive.

There are, however, some neat features. The I-Pace can use each driver’s key fob to learn their preferences and ensure their usual climate control and infotainment settings are ready every time they get behind the wheel. Apple CarPlay and Android Auto come as standard too.

Ultimately, though, the system isn’t as good as BMW’s fantastic iDrive system in the iX3, or the MBUX infotainment system of the Mercedes-Benz EQC. Both are easier to use than the I-Pace’s, partly because they provide physical controls on the centre console – a rotary controller in the iX3 and a touchpad in the EQC – that are more intuitive to use on the move than a touchscreen.

The plastics aren’t going to give Audi and BMW quality controllers sleepless nights, but they’re a step up from those in the Jaguar F-Pace and are very impressive by the standards of the electric car class. The structure between the front seats feels more solid than that of the Tesla Model S, while I-Pace's interior is noticeably plusher than the Mustang Mach-E’s.

There’s a strong ‘wow factor’ too, thanks to the fancy graphics of the various digital displays and the fact that the steering wheel is wrapped in soft-grain leather. However, while the stalks that sprout from the steering column look and feel solid, the dials on the secondary touchscreen in the centre console feel a bit flimsier.