We tested them in cold weather earlier this year, but now the heat is on to find out how close electric cars can get to their official ranges in near-ideal summer conditions...

Twice a year (in the height of summer and the depths of winter), we put 10 electric cars through a ‘drive ’em till they die’ test to see how realistic their official (WLTP) ranges – the figures you see in the brochures – really are.

We’ve never found a car capable of matching (let alone beating) its official range, but the weather this year was warmer than for any previous test, so will one of our contenders finally prove it’s possible? 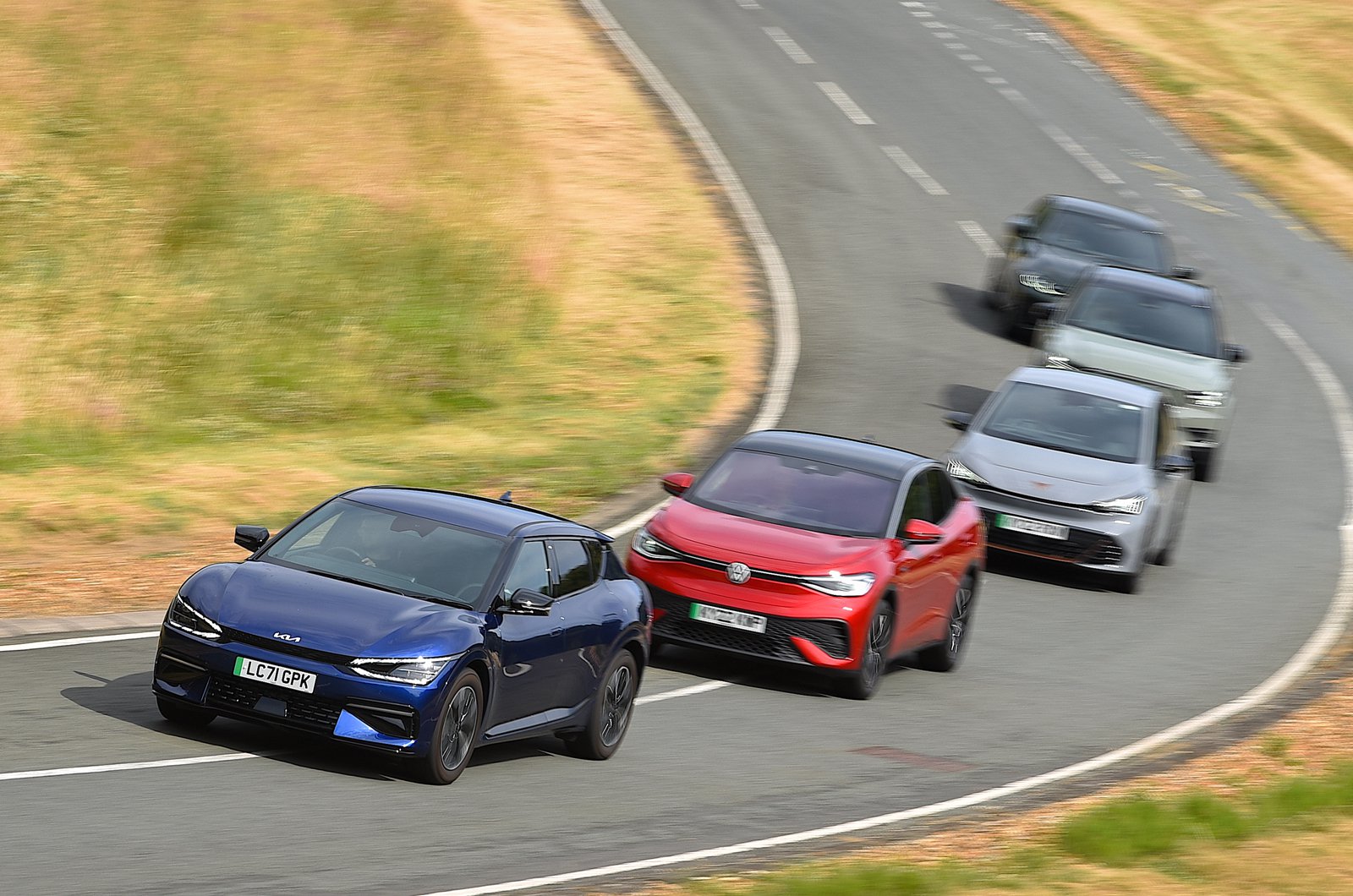 How we did it?

For obvious reasons, it wouldn’t be safe to deliberately run the cars out of charge on the public road, so we always use our test track in Bedfordshire.

We followed a relatively simple test route of around 15 miles, which included 2.6 miles of simulated stop-start urban driving, four miles at a steady 50mph and eight miles at a constant 70mph. The rationale for the high percentage of high-speed cruising is that drivers who want to travel long distances in one hit are likely to be using the motorway network.

The cars were fully charged and then left out in the open overnight – for roughly 14 hours in 21-30deg C ambient conditions. The following morning, all 10 were plugged in again to check they were fully charged before the climate control was set to 21deg and the headlights switched to auto. 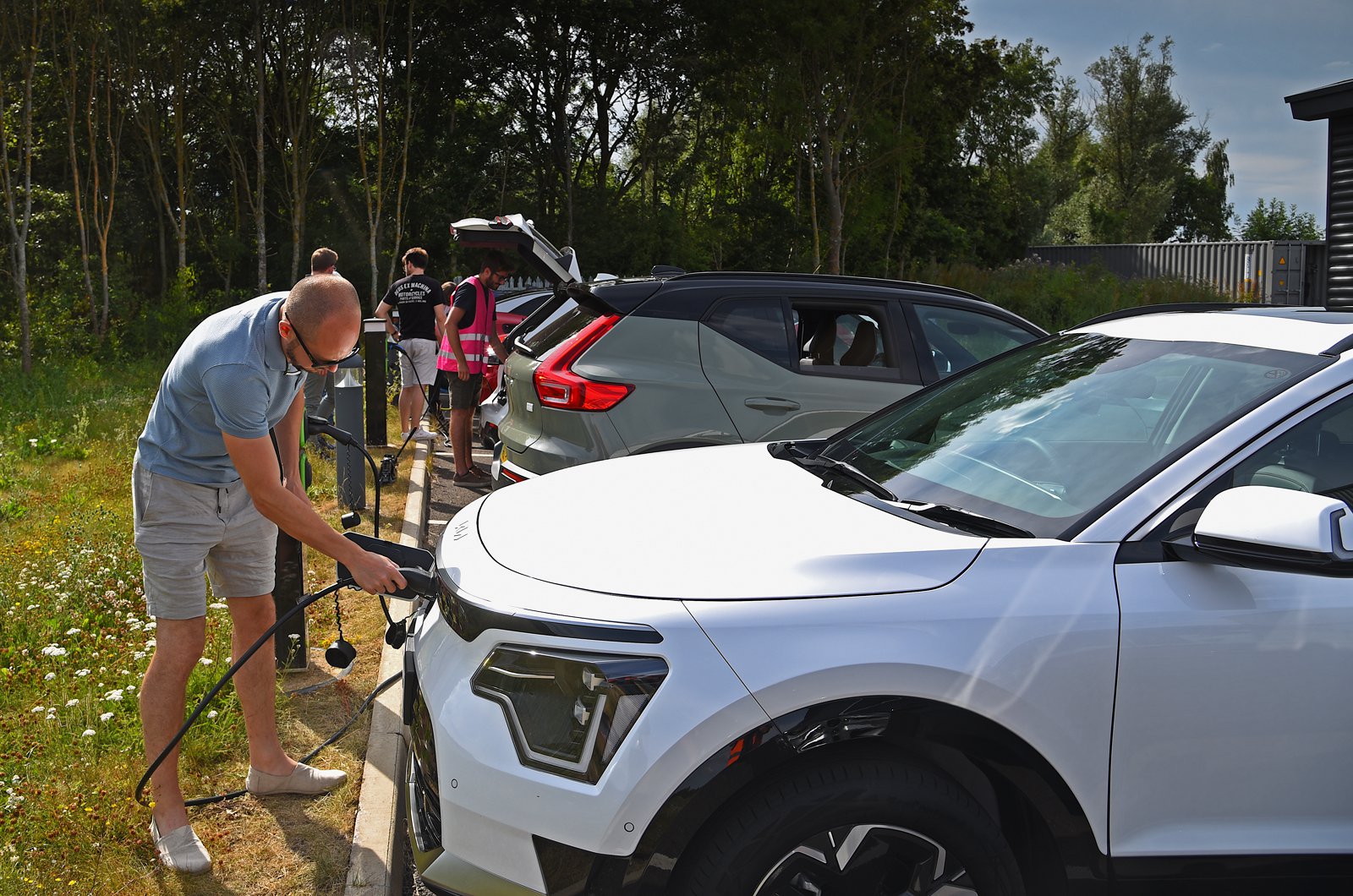 Normal (or the closest equivalent) driving mode was selected (no Eco modes were allowed) and the cars were left in their default regenerative braking setting – if an ‘automatic’ or ‘adaptive’ mode was available, this was selected.

The cars were then driven repeatedly around our test route in convoy, with driver changes and a switch in running order at the end of each lap. It was a relatively hot but cloudy day and the air temperature ranged from 24-29deg C during testing. The warm temperatures meant the air conditioning systems were running continuously to cool the cars’ interiors.

Unsurprisingly, the car with the smallest battery – the Cupra Born – ground to a halt first. It still managed a respectable 219 miles, though – 12% short of its official range. 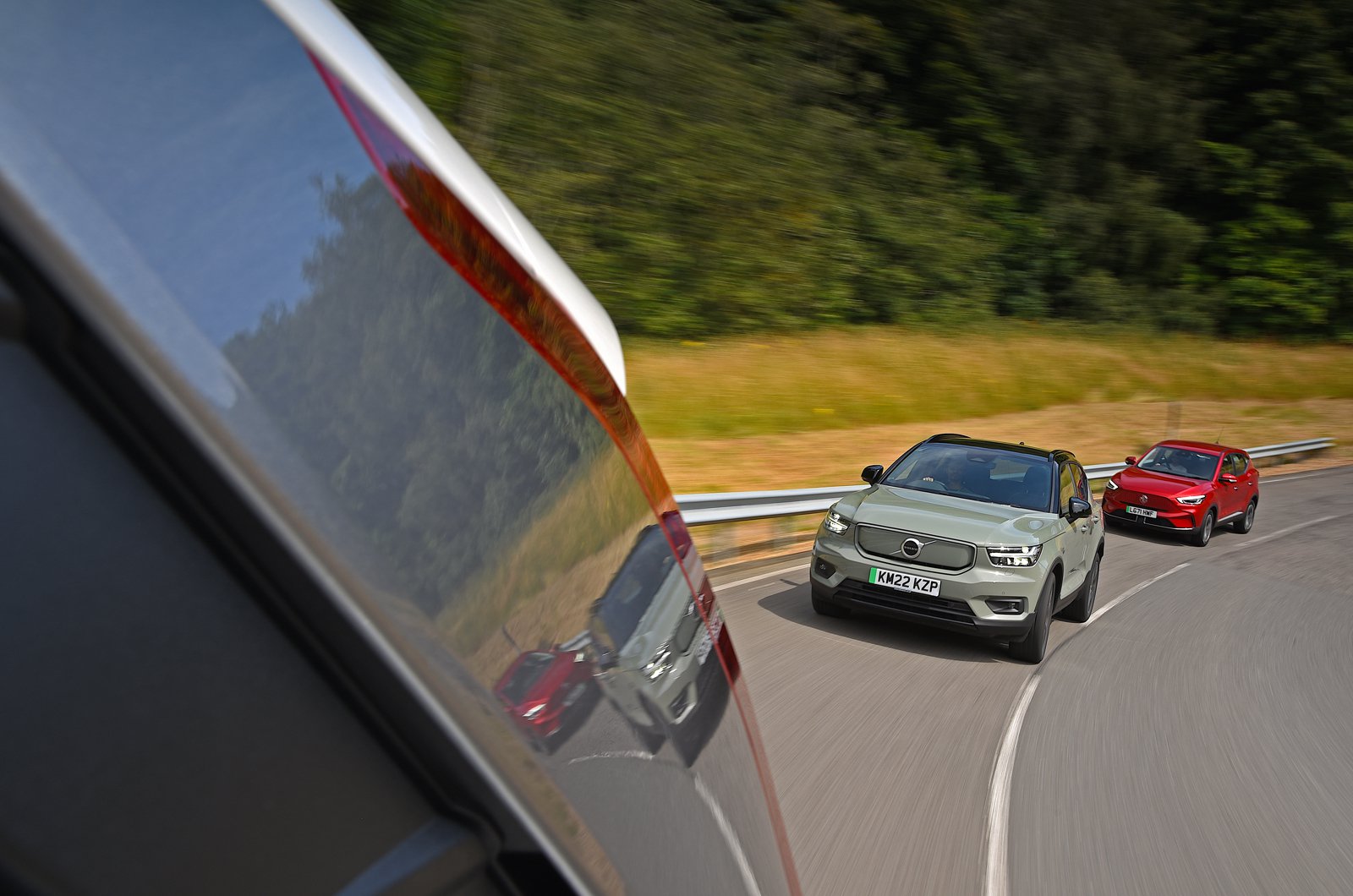 Next to drop out, at 226 miles, was the much pricier Volvo XC40 Pure Electric; it fell a more disappointing 13.7% short of the figure published in brochures. It was also the joint least efficient car in the line-up, averaging just under 3.4 miles for every kilowatt hour (kWh) of electricity stored in its battery.

And the XC40’s range and efficiency look even less impressive when you consider that the similar-sized, but vastly cheaper, MG ZS EV managed 246 miles and 3.6 miles/kWh. Indeed, the ZS was only a few miles shy of the 253 miles achieved by the BMW iX3 and new Kia Niro EV. The latter car, being much smaller and lighter, proved more efficient, averaging 3.9 miles/kWh, compared with 3.4 miles/kWh.

Our top five kept going for at least another 25 miles, before the EV6 (our 2022 Car of the Year) finally gave up the ghost. A real-world range of 278 miles is a highly respectable figure and will be more than enough for most potential buyers, although the EV6’s range in our test was a sizeable 15.2% adrift of what it’s officially supposed to be able to deliver. 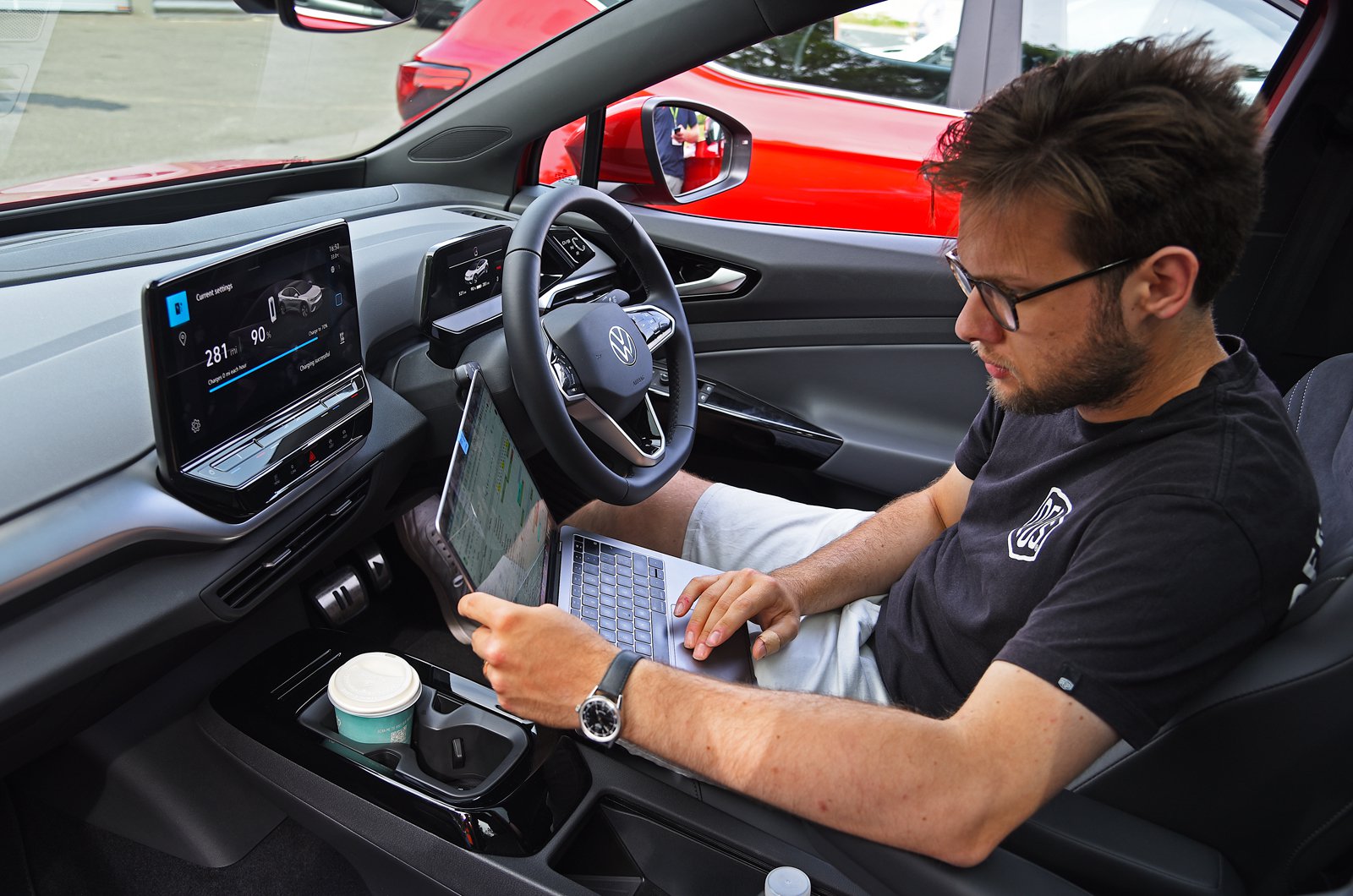 Slightly better efficiency kept the new Volkswagen ID 5 going for another three miles, while the Tesla Model 3 ground to a halt after 293 miles. The latter result does need some explaining, though.

The car supplied to us by Tesla was an early 2021 model with a 70kWh battery; a larger (75kWh) battery was introduced early in 2022. The latest version was actually part of our winter range test back in February, and even in temperatures ranging from 3-7deg C, it managed 281 miles. Based on the outstanding 4.2 miles/kWh efficiency that the older Model 3 managed this time around, a range of around 315 miles would have been likely had we been testing the latest model.

Next to die was the Tesla Model Y, a car with an official range 44 miles behind that of the latest Model 3. It finally stopped after 304 miles, and came the closest to matching its official range (it fell just 8.1% short). It was also one of two cars (both Teslas) that returned more than four miles for every kWh of electricity. 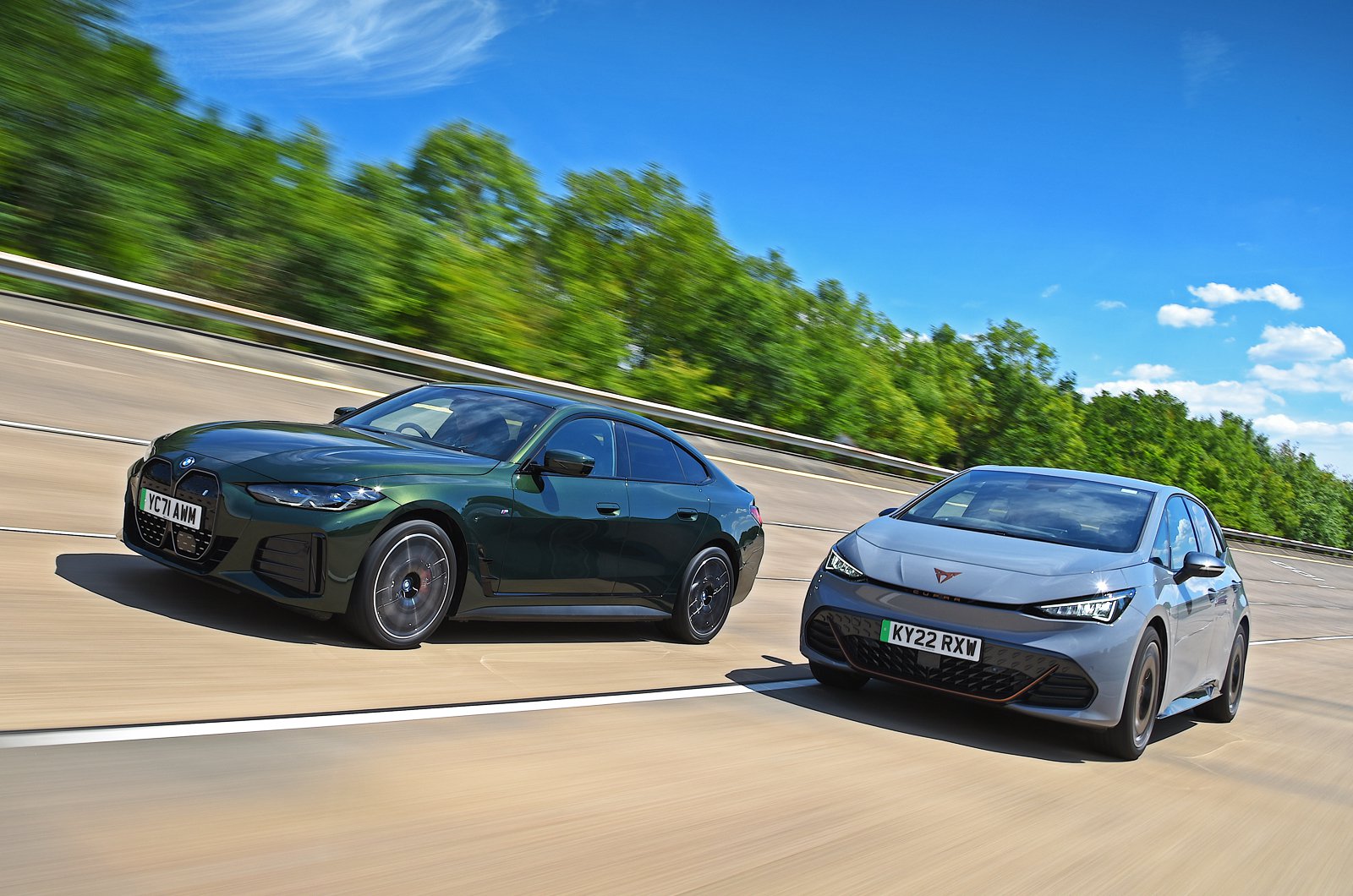 It would have been a close-run thing had we been testing the latest Model 3, but that should take nothing away from our winner on the day: the BMW i4. It kept going for an incredible 316 miles, achieving an impressive 3.9 miles/kWh efficiency figure and coming up just 8.2% shy of its official range.

True, other electric cars that weren’t part of this test (including the £102k Mercedes EQS) might have gone even farther, but the i4 is a relatively keenly priced option, especially when you factor in its upmarket interior and brilliant infotainment system.

All range figures rounded down to the nearest mile

Three of our contenders – the BMW iX3, Kia EV6 and Tesla Model Y – also took part in our winter range test back in February. Exactly the same route and speed profile were used on both occasions, and the cars were specified identically, right down to their wheel sizes.

Next: What happens when an electric car runs out of charge? >>