Every Jaguar I-Pace has four-wheel drive courtesy of two electric motors – one at the front, the other at the rear.

Together they pump out 395bhp, which is enough for 0-60mph in 4.5sec. That’s slower than the monstrously rapid Tesla Model S and Model X, but plenty to pin you back in your seat and significantly faster than the vast majority of cars, including all electric SUV rivals except the Model X.

Not only can you get around quickly in the I-Pace, but you can also travel quite far. Its 90kWh battery pack gives an official range of 290 miles on a single charge – again, surpassing most other electric cars, including almost all non-Tesla rivals.

In our Real Range test the I-Pace managed 253 miles. While that’s farther than almost every other electric car we've tested, including the Tesla Model S and Model X, the king of electric SUV range is the Ford Mustang Mach-E (assuming you pick one of the Extended Range models).

Happily, the standard (passive) suspension on the Jaguar I-Pace is good enough to mean you don't have to splash out on the optional air set-up.

It smothers the harshness of most bumps, whether you're moseying around town or belting along an A-road. It’s certainly a more relaxing companion than the firm-riding Ford Mustang Mach-E.

Our only criticism is that it doesn’t control its mass quite as smoothly as the Audi E-tron, which is the most comfortable electric SUV you can buy. The I-Pace exhibits more vertical movement over crests, and sways a little from side to side over uneven surfaces, but it is by no means uncomfortable.

Those same movements are discernible even with the optional adaptive set-up in its softest Comfort mode, but you can flick it into a firmer Dynamic mode that tightens up the body control. On the downside, doing that means road imperfections are transmitted through to the interior as thuds, whereas in Comfort mode the I-Pace can absorb initial impacts better than a Mercedes EQC. 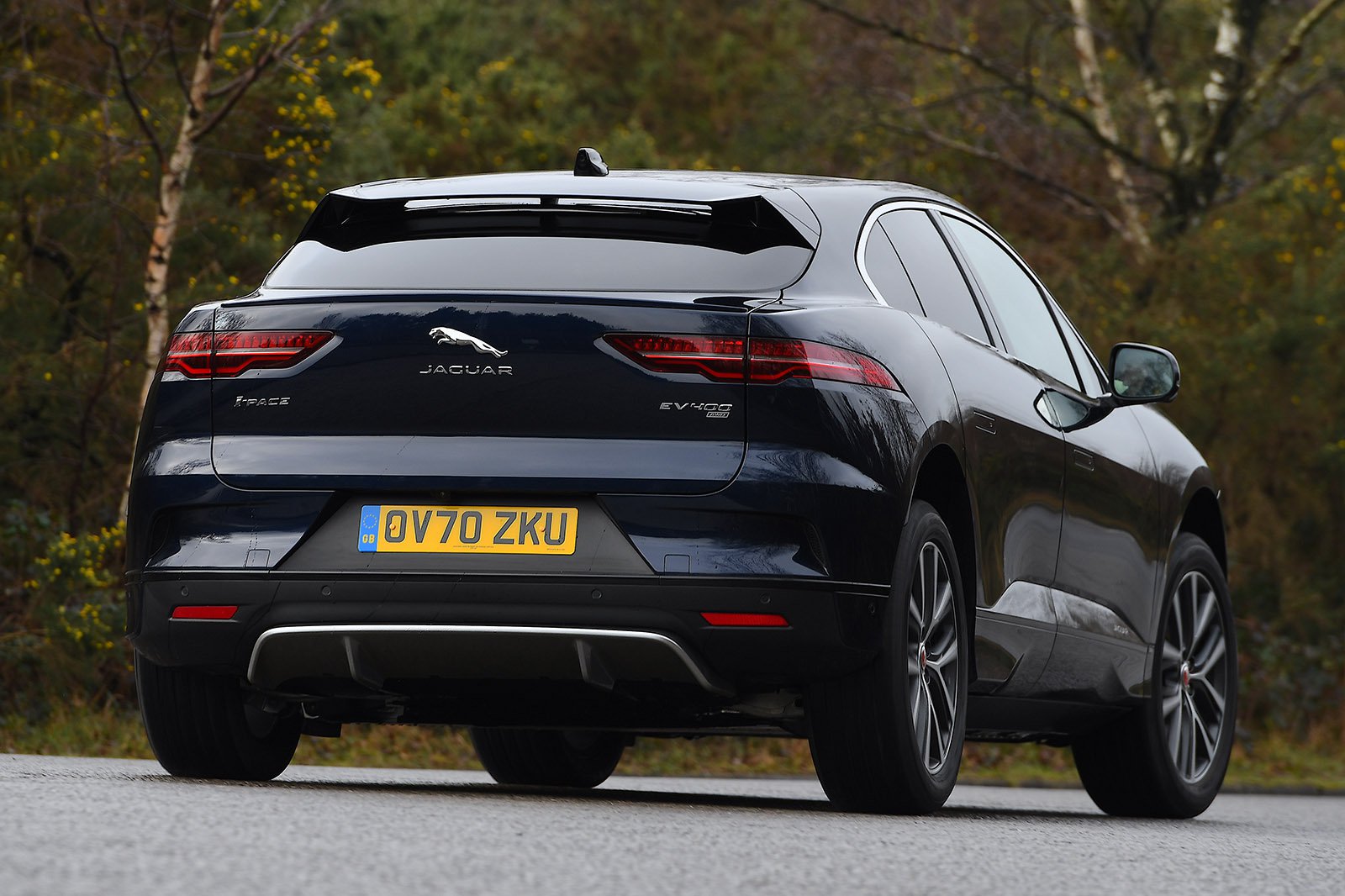 You’ll feel the weight of the Jaguar I-Pace shifting on to its outside wheels when you turn in to a corner at speed, but it hangs on to your chosen line gamely – as long as you don't encounter mid-corner bumps, which tend to upset its balance a touch.

Push harder and you’ll feel the car gently run wide at the front in a safe, secure manner, but the stability control’s interventions can be sudden. The I-Pace is still decent fun to drive for an electric vehicle and pretty agile for an SUV, with a low centre of gravity and precise steering that has just the right amount of weight.

However, while it’s more fun on a twisty road than the Audi E-tron and Mercedes EQC, the BMW iX3 and Mustang Mach-E feel even more nimble, leaning over a little less through corners than the I-Pace. If you really value handling and are willing to look beyond the SUVs in this electric car class, the Tesla Model 3 and the Porsche Taycan corner even more impressively.

One trump card the four-wheel-drive I-Pace holds over its rivals, though, is that it’s surprisingly capable off road. That’s thanks to clever hill climbing and descent systems borrowed from Jaguar’s sister company Land Rover, and the fact that the height of the optional air suspension can be adjusted.

As with all electric cars, regenerative braking on the Jaguar I-Pace captures some of the energy normally lost when you lift off the accelerator pedal.

If you turn it to its maximum setting, the effect is so strong that you’ll rarely have to touch the brake pedal at low speeds. That’s handy because the resistance in the brake pedal feels inconsistent; this can make it hard to slow your progress smoothly using the brakes. An Audi E-tron is far easier to stop without feeling like a learner driver.

Fortunately, despite its sharp accelerator responses and stunning performance, the I-Pace makes it easy to pull away smoothly because its power delivery is nice and progressive.

Road and wind noise are generally well contained, especially on the test cars we've tried that are fitted with laminated side windows.

Depending on how vigorously you drive, the electric motors are either near-silent or make a sound like the Starship Enterprise going into warp speed. Secret Trekkies might enjoy this feature, although it's probably not advisable to demonstrate it on a first date.