Don’t MAN make trucks? Well, yes, but since 2017 they’ve also been making a van thanks to their group partner Volkswagen.

The MAN TGE is based on the Volkswagen Crafter. In fact, it is identical in every way, except that as a truck manufacturer, MAN has service centres that are open 24 hours a day, and as a result you can get your MAN TGE booked in for a service “out of hours”. For a busy business that can be a real blessing.

The TGE range is just as diverse as the Crafter’s, with two different length vans and two heights, as well as single- and double-cab chassis platforms. There’s even a campervan version, which is a traditional body-on-frame model, rather than a fitted out panel van like the Crafter-based Volkswagen California XL.

You can also have the TGE with gross vehicle weights of 3.0 tonnes or 3.5-tonnes, plus there is a much larger 5.0-tonne version should you need to carry very heavy payloads. Towing capacity is also 3.5 tonnes.

Unlike other vans which have set trim levels, the TGE comes as a basic van with an enormous options list which allows for a huge degree of flexibility and means you really do get what you pay for.

There is choice when it comes to the engines, with a 2.0-litre four-cylinder diesel unit available in four different power outputs. This is where it can get a little confusing, because the TGE is available in front-wheel-drive, rear-wheel-drive and four-wheel-drive forms, and there are different engines to match.

On front-wheel-drive vans the two higher output engines can be specified with an eight-speed automatic gearbox, but on the rear- and four-wheel-drive vans it is just the top-power engine that has that option.

In addition to its Volkswagen Crafter sibling, the MAN TGE has to compete with a host of other large vans, including the Ford Transit, Nissan NV400, Peugeot Boxer and Renault Master. Yet, it is the Mercedes Sprinter that the TGE is best compared with.

The Sprinter also has the full range of front, rear and four-wheel-drive drivelines and has manual or automatic gearboxes across its range. There will also be electric versions of both the TGE and the Sprinter, which will compete against the Volkswagen e-Crafter. 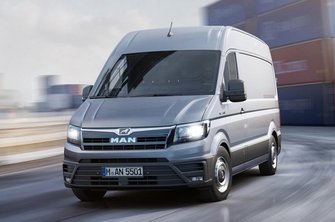 The Sprinter is without doubt the most advanced van on the mar...

Like fine cheese and wine, the Ford Transit just k...

The Ducato capably takes aim at its Germans rivals and doesn’t...