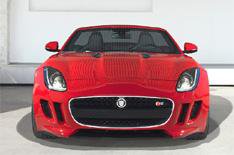 The Jaguar F-type sports car has been unveiled at the 2012 Paris motor show ahead of going on sale in spring 2013.

This is the production version of the F-type, which, as expected, has changed little from the Jaguar C-X16 concept car that was unveiled at the 2011 Frankfurt motor show.

The F-type's styling incorporates a modern front end, which makes a relatively clean break from Jaguar's heritage; the oval grille that featured so famously on the C-, D- and E-types has been replaced by a more rectangular design, although there's a D-type-esque 'haunch' at the rear wheels.

A hidden rear spoiler lifts at speed to reduce lift, while LED rear lights are standard.

Although the F-type's cabin is more conventional than the C-X16 concept car's, it has a driver-oriented dashboard and, Jaguar says, 'a more technical finish' on the driver's side.

Extensive use of aluminium in the F-type's construction has helped to keep down the weight, and high-strength plastics are used for structures under the boot lid.

Three models will be available from launch. The standard F-type has a 335bhp supercharged 3.0-litre V6 petrol engine, while the S has a 375bhp version of the same unit. The V8 S model gets a supercharged 5.0-litre V8 that develops 488bhp.

In all three versions, power is sent to the rear wheels through an eight-speed automatic transmission, and engine stop-start technology is standard. An 'Active Exhaust' system is standard for both S versions and an option for the entry-level model. It uses valves in the rear section of the exhaust to allow the driver to choose from different sound settings.

The entry-level 3.0-litre V6 models will start from 58,500, and will be a rival for top-spec versions of the Porsche Boxster.

A coupe version will be added to the range later in 2013, but Jaguar hasn't confirmed exactly.