Forget the confusing blend of SUV and supermini, the new Nissan Juke Nismo is a straightforward rival to warm hatches such as the Mini Cooper S and Citroen DS3 THP 155. It's intended to be fun and desirable, yet usable on a daily basis.

Compared with the standard Juke, power from the Nismo's 1.6-litre turbobcharged petrol engine is up by 9bhp to 197bhp, while torque is boosted by 8lb ft to 185lb ft.

Here, we test the manual, front-wheel-drive version, which costs 19,999. The Nismo will also be available with four-wheel drive and an automatic CVT gearbox; a combination that costs 22,195.

As well as the power upgrade, the Juke Nismo gets stiffer suspension and quicker steering. Another big incentive is its generous standard equipment, which includes unique 18-inch alloys, sat-nav, and new suede-trimmed adjustable sports seats.

What's the 2013 Nissan Juke Nismo like to drive?
It's certainly fun. The engine provides a strong surge of acceleration from low revs, so there's no need to hit the 6500rpm redline to get the best from it.

It's just as well, really, because it sounds whiney and strained higher up the rev range, which discourages you from working it hard a lot of the time.

The steering is substantially weightier and quicker than the standard Juke's, which translates into more feel and sharper response in bends.

Body roll is also well restrained, so the Juke also feels planted and stable under hard cornering. However, the front wheels spin very easily when the turbo kicks in, which can make the car run wide. This is a characteristic you'll either love or hate, but it's something you'll have to watch out for.

The Nismo isn't exactly a comfortable car, either. The ride feels rather unforgiving over sharper bumps, of which there are plenty on UK roads.

It does settle in normal motorway use or on smoother A-roads, but the speed of the steering can make the car feel rather nervous at faster speeds.

What's the 2013 Nissan Juke Nismo like inside?
The new seats are a joy. They're deep, heavily bolstered and have a decent range of adjustment, so they'll be comfortable and supportive for most drivers. Those over six-foot might struggle a little, though, due to the Juke's restrictive size and the lack of reach adjustment on the Alcantara-trimmed steering wheel.

Those seats do cut into an already compromised rear passenger space, so this is not a car you should be considering if you plan to carry four people on a regular basis. Some cheap-looking materials on the dashboard also let down the Juke, but for all its flaws, the Nismo's cabin is a cheerful and impressively gadget-laden place to be.

Should I buy one?
If you want something that's quirky and fast, but that doesn't cost a fortune to buy and run, the Nissan Juke Nismo is worth considering. It has rewarding performance, and its rarity factor and extrovert looks will appeal to some.

However, there are faster and more efficient hatchbacks that are much cheaper if not as well equipped. 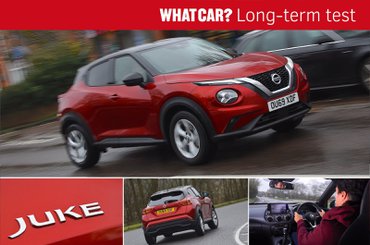 The original Nissan Juke was one of the best-selling cars in the UK, but this second-generation model now faces much stiffer competition. We have four months to see if it can worry the class leaders

How to spec a Nissan Juke