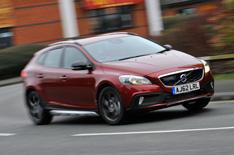 The Volvo V40 Cross Country is aimed at those who like the idea of a Volvo with a sense of adventure. It's based on the V40 small family car, but with some extra body cladding to give it a more rugged appearance, and some additional ground clearance, should that sense of adventure include the desire to traverse a field.

The engine range mirrors that of the V40, so starts with the 113bhp 1.6-litre diesel that emits just 99g/km of CO2, and extends up to a 250bhp five-cylinder, 2.5-litre petrol, which also comes with four-wheel drive.

What's it like to drive?
We drove the D2 version with its 1.6-litre diesel engine that generates 210lb ft of torque. The engine pulls strongly enough once the turbo has awoken at around 1900rpm, but runs out of puff again at only 3500rpm.

However, use the notchy six-speed gearbox to keep the revs in this area and it's possible to make perfectly reasonable progress. The engine is smooth enough, too, but is a little bit too eager to make you aware of how hard it's working.

Once up to a typical motorway speed, the V40 Cross Country bowls along nicely, easily keeping up with the ebb and flow of traffic. However, as with the conventional V40 hatchback, there's far too much road noise.

The V40 Cross Country rides firmly, but without the harsh edge that conventional V40s have. It's also slightly more supple than the rival Volkswagen Tiguan, but not as comfortable as a Ford Kuga or Nissan Qashqai.

The steering is light and easy at parking speeds, but up the pace and the steering is noticeably devoid of feedback, which makes placing the car more difficult than it need be.

What's it like inside?
The V40 Cross Country is identical inside to the V40 hatchback, so has an interior that's a cut above its rivals for style. It all feels well built from good-quality materials, too.

Our test car also featured Volvo's optional (350) TFT instruments, which you can configure in three modes. These are undeniably clear and informative, although whether they're worth the extra cash is more questionable.

The seats are all comfortable, and the front occupants get a reasonable amount of space. However, move into the rear and headroom is short. This causes you to slouch down and means your knees rub against the backs of the front seats.
Boot space trails that of rivals, no matter whether the rear seats are up or down.

Should I buy one?
The V40 Cross Country costs exactly 1000 more than the equivalent V40 hatch, so kicks off at 22,595, which makes it around 600 more than an equivalent Volkswagen Tiguan and only 400 less than a full-on SUV such as the brilliant Mazda CX-5. These are both better cars, and are what we'd spend our money on.

However, the V40 Cross Country D2 hits back by emitting just 99g/km of CO2, which puts it in the 13% band for company car tax and means entry to the London Congestion Charge zone is free. The D2 version will also do an average of 74.3mpg, according to Government figures.