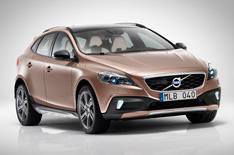 This is the Volvo V40 Cross Country, which has made its public debut at the 2012 Paris motor show.

The Cross Country is a 'soft-roader' version of the new Volvo V40, and is a rival for cars such as the Audi Q3 and BMW X1.

It gets a range of cosmetic tweaks for a more rugged look, including new bumpers and side sills with contrasting inserts. There's a new front grille, rear 'skid plate' and new daytime running lights.

Extra ground clearance is provided by a 4cm boost in ride height, while the V40 Cross Country gets bespoke alloys and black door mirrors and roof rails.

The Volvo V40 Cross Country goes on sale in late 2012. Prices and full specifications are yet to be revealed, but we'd expect a premium of around 1000 over the equivalent V40 model.