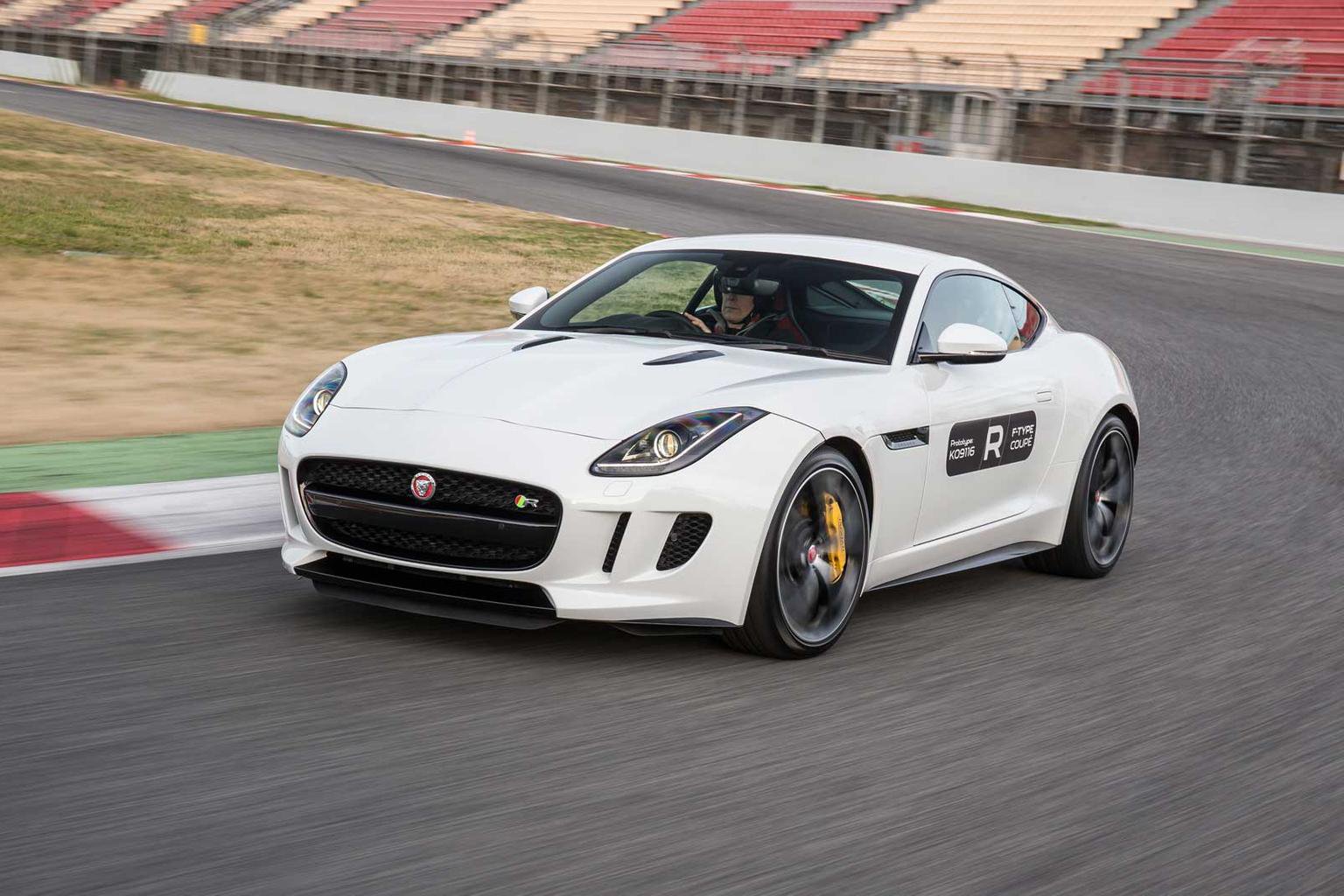 So, is the new Jaguar F-type Coupe ‘just’ a tin-top variant of the F-type convertible we know and love?

The engineering highlights suggest that it’s more than that. The all-aluminium body is a whopping 80% stiffer than the soft-top’s, the spring rates are firmer and the dampers recalibrated. Then there’s the supercharged 5.0-litre V8 R model, which we drove on track in prototype form and is currently only available in the Coupe.

The rest of the Coupe’s engine range consists of the same 335bhp or 375bhp supercharged 3.0 V6 petrol engines found in the convertible, although the naturally aspirated V8 S model is replaced by the R.

Other than it being the most powerful model in the range, the 542bhp R is set apart by an electronically controlled diff, which works with a torque-vectoring system that brakes the inside wheels to aid handling; a system that’s unique to the R. It also retains the same adaptive dampers as the top-end F-type convertible models, with damper, steering, gearbox and exhaust settings that can all be adjusted independently.

The V6 S Coupe gets a limited-slip diff, whereas the base V6 makes do without. It’s also worth remembering that the V6 Coupe models are more than £7k less than the equivalent F-type convertible models.

Carbon-ceramic brakes are available as a £7400 option on the R and S, and Jaguar’s eight-speed Quickshift automatic gearbox is standard across the range.

What’s the new Jaguar F-type R Coupe like to drive?

It certainly has a more palpable sense of intent than the soft-top. The steering remains unaltered from the convertible, delivering rapid but smooth responses and a heavy, satisfying bite. We’re familiar with the engine from the XKR-S and other hot Jags, and in the F-type R Coupe it delivers the same blend of explosive pace tempered with a predictable power delivery and precise throttle response.

The diff and torque-vectoring systems in the R can be felt subtly as they tug the car’s nose in through fast corners. Essentially they make for more progressive and manageable responses than you’d find in the convertible if you lift off the throttle at an ill-advised moment, or have to make a quick direction change when the car’s not settled.

That’s not to say that the R is a beginner’s choice. It feels every inch a proper, serious sports car; alert and likely to bite back if you get it wrong, and a much more serious rival to the Porsche 911 than any of the convertibles.

What does hint at great things for the F-type Coupe range as a whole is the R’s extra traction. As much a result of the extra torsional rigidity as the techy electronic handling enhancements, the Coupe has lost some of the convertible’s flightiness and gained a more planted, grippy cornering ability.

Those carbon-ceramic brakes are quite something, too, but at the price we’d say the standard steels (which are also uprated for the R) will offer better feel at normal road speeds and are unlikely to suffer fade unless you go on track. If you do fancy some circuit use, then the ceramics could be worth it as they resist fade well and offer good feel in very hard use.

The dash remains unchanged from that in the convertible, which few will find issue with. Rising dash-top vents provide the trademark Jaguar sense of theatre, and everything has a sense of luxury that you’d expect. The standard leather-clad sports seats in the R are successful, too, having adjustable bolster support and a broad range of movement.

There’s also a bag hook and a useful if oddly shaped cubby behind the seats, but what will really please buyers is the boot. While still shallow, in the Coupe you have 315 litres of space that will allow you to carry one or – at a squeeze – two sets of golf clubs. It’s a vast improvement over the convertible, which has little useable space in cabin or boot. Just be wary of adding the optional spacesaver tyre, because it will sit on top of the boot floor, rendering it nearly useless.

For some, the looks alone will have sold it, and we can see why.

On more objective matters, we’ll reserve final judgement until we’ve driven the F-type Coupe on the road, and in guises other than the R. After all, the R is an astonishingly capable sports car, but many buyers will see the near-£25k cheaper V6 S as the more justifiable purchase.

Regardless, if you’re considering a sports car along the lines of the Jaguar F-type Coupe, don't make a decision until you’ve had a go in it. It’s in showrooms end of March, and our stint in the prototype R Coupe suggests it hits a sweet spot somewhere between the foaming-at-the-mouth madness of the Jaguar XKR-S and the unflappable precision of the Porsche 911. In a car this good-looking, it could be the holy grail of sports cars.