Updated entry-level Ford Fiesta Trend gets extra equipment and enhanced looks, but does that make it the pick of the range?...

Some might argue that going for the most affordable version of a product is always a compromise – a bit like how you get ‘only’ three cameras on a boggo iPhone 11 as opposed to four on an iPhone 11 Pro. However, in the case of the Ford Fiesta Trend, that might not be entirely true.

You see, the Fiesta is one of Britain's most popular cars; it has never really had trouble finding customers. Even so, Ford has upgraded its entry-level trim and renamed it Trend. It replaces Zetec and hopes to balance a good level of standard equipment with an affordable asking price.

Although it’s the entry point of the Fiesta range, it certainly doesn’t look it. There are no utilitarian steel wheels or plastic trims; instead, you get 16in alloys, privacy glass and a chrome grille surround. There's also a touchscreen infotainment system, automatic headlights and lane-keeping assistance to make long trips more pleasant. However, there’s one slight issue with the Fiesta Trend: it’s available only with a 1.1-litre petrol engine that does without the turbocharger of our favourite Ecoboost models.

So, are the similarly priced versions of close rivals such as the Volkswagen Polo and Skoda Fabia better value than the Fiesta Trend, and is the 1.1-litre a better engine than what rivals have? Let’s find out. 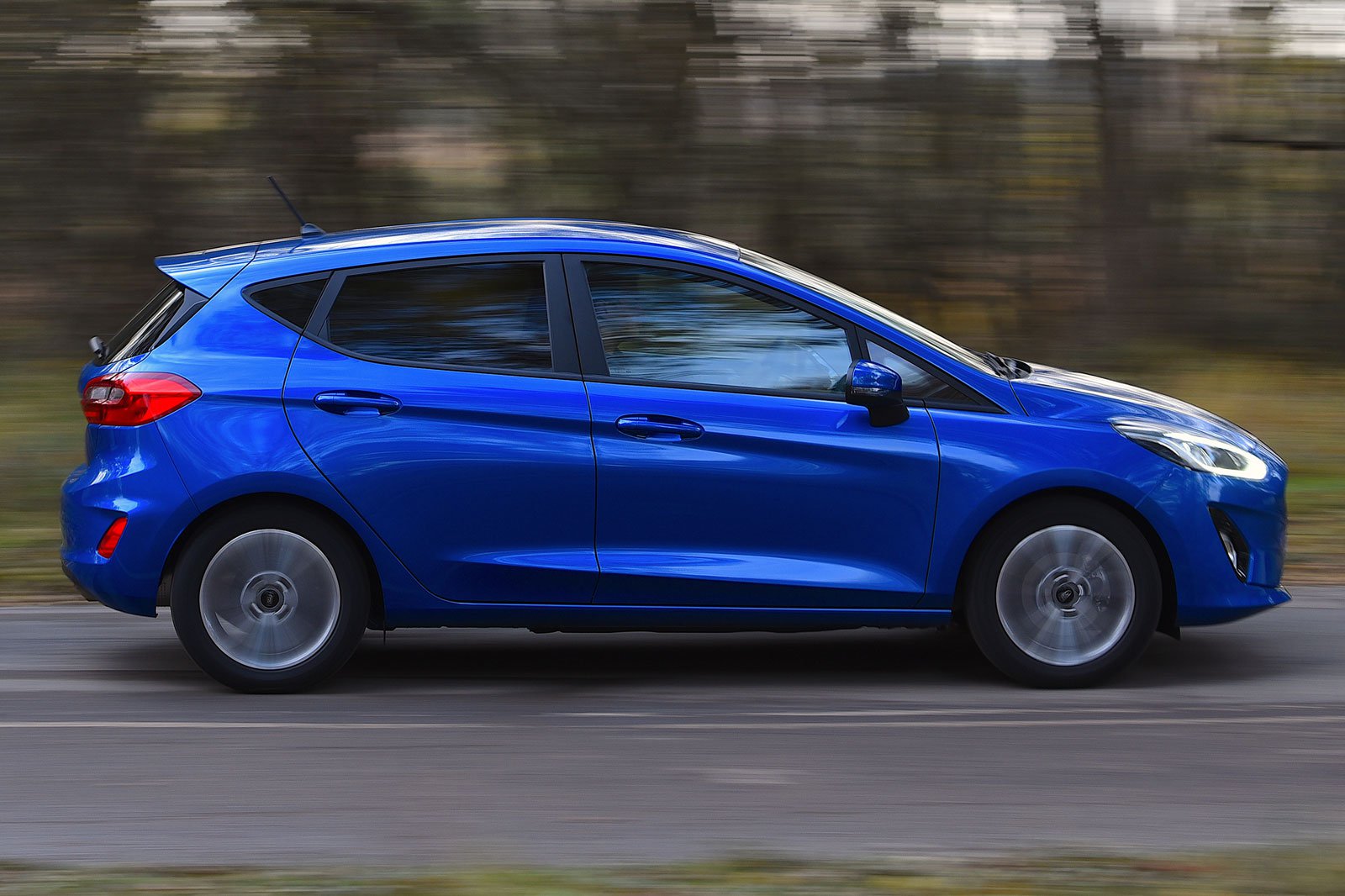 As soon as you start the three-cylinder engine, you’re pleasantly surprised by how refined it is. It’s definitely less thrummy than equivalent engines in the Polo and Fabia. The gearchange is another highlight, thanks to a relatively short throw and a general slickness to its action.

Even in this most affordable form, the Fiesta is a hoot to drive. It grips strongly, turns keenly in to corners and has accurate, reassuringly weighted steering. You’ll be exceedingly happy with the Fiesta Trend if you’re a keen driver.

In fact, you'll end up enjoying driving it so much that you might even forget that its performance is pretty unremarkable. With 84bhp, the Fiesta is 3.8sec slower from 0-62mph than the 94bhp Polo, which costs only about £170 more to buy.

Around town and in traffic jams, you won’t notice the limited performance that much, but it’s at higher speeds that the Fiesta really struggles, especially if you have passengers on board. There’s noticeable road noise on the motorway and the lack of sixth gear means the engine runs at fairly high revs, generating yet more racket.

Elsewhere, the Fiesta continues to perform well. Take the ride quality, for example: yes, it’s a dinky car, but its body control and reluctance to crash or thud over bumps is truly noteworthy. On the sort of undulating B-road that will have your passenger’s head tossing from side to side in just about any other small hatchback, the Fiesta remains composed and well tied down. Its suspension is definitely on the firm side, though, so the softer Polo is still the more cosseting choice if you’re looking for ride comfort above all else. 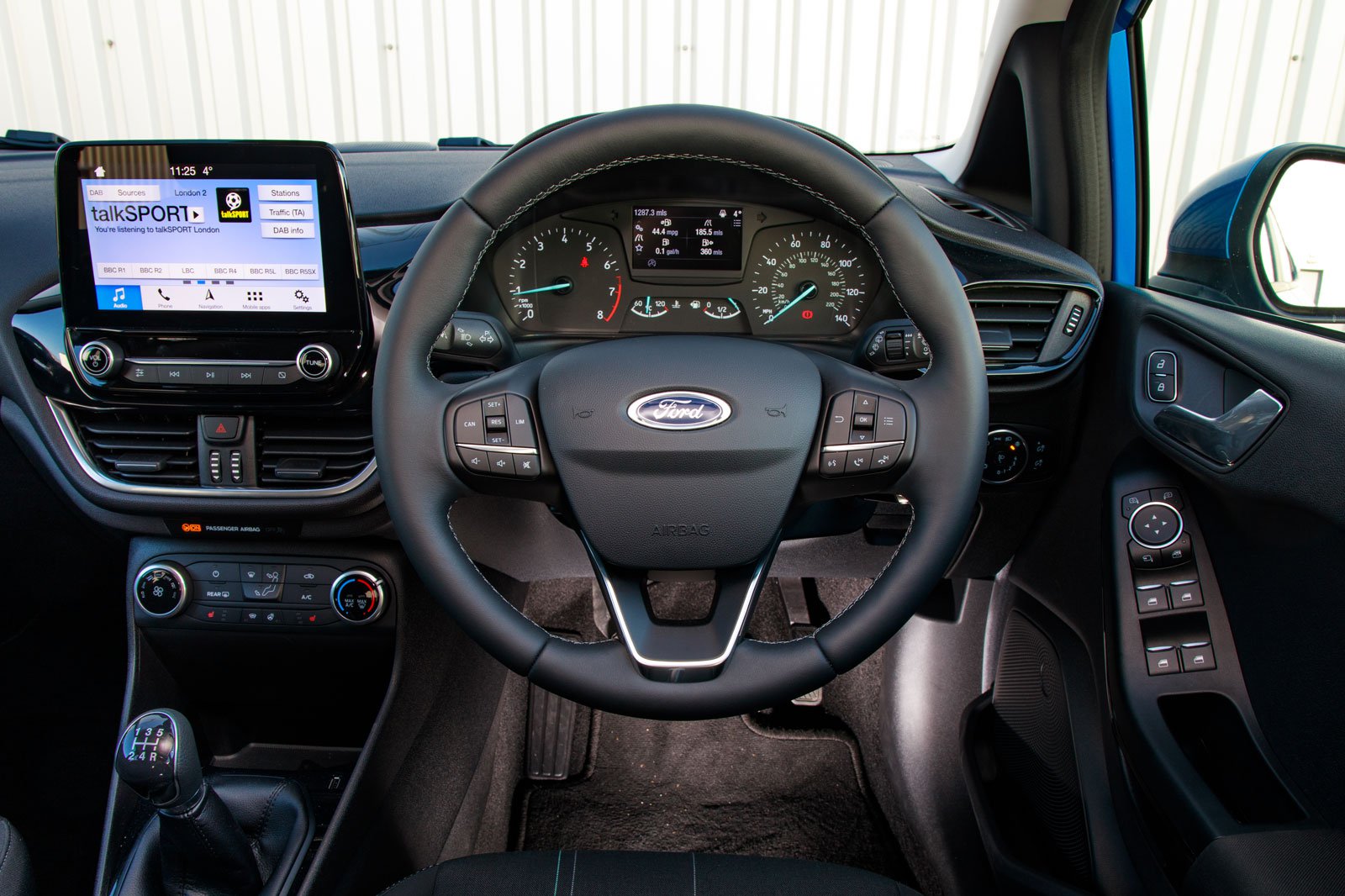 Inside, most of the areas you interact with frequently are pleasingly soft to the touch. There are, however, areas of unappealing, hard plastic lower down, and it doesn’t feel quite as well built as the Polo. You get a pretty good view out of the Fiesta, thanks to a relatively high driving position, but there are some issues with over-the-shoulder visibility, due to small rear side windows. You can get rear parking sensors as a £400 option (packaged up with power-folding door mirrors).

On a more positive note, the Fiesta Trend gets an 8.0in touchscreen infotainment system with Apple CarPlay and Android Auto, allowing you to use your smartphone’s apps on the car’s screen. The system is simple to use, but it’s just that bit slower to react than the system in the equivalent Polo and doesn’t look as snazzy.

As for passenger space, the Fiesta is by no means cramped, but 6ft-tall rear passengers sitting in the similarly priced Polo or Seat Ibiza will have more head room. Fitting three abreast in the Fiesta is also trickier, because of a narrow middle seat.

It’s a similar story when it comes to boot space: the Fiesta has a smaller boot than a number of alternatives. It will gladly cope with the weekly shop, but the Polo remains the more practical choice for a weekend away.

Don’t forget to check out our full Fiesta review if you want to know more about the other engines and trims available and see which ones we recommend.