The Audi Q7 60 TFSIe brings plug-in hybrid power to our favourite luxury SUV. It looks good on paper, but what’s it like in real life?... 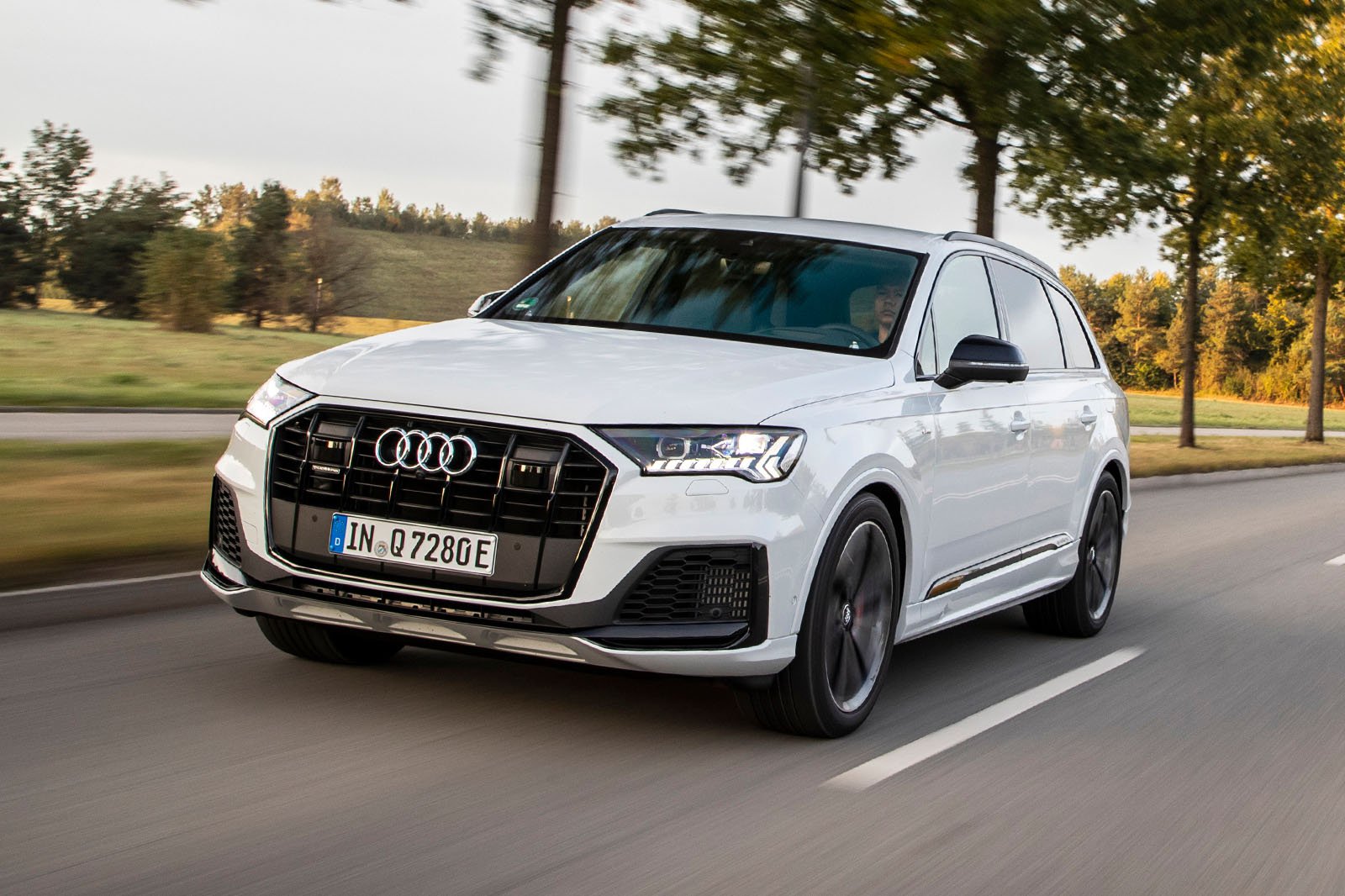 “Did you want three-pin or Type 2?” That sentence might not make much sense now, but there’s going to come a point where not only will you be asking someone if they have a charger compatible with your phone, but a cable to plug in your car, too. The new Audi Q7 60 TFSIe is at the forefront of this change, as Audi is planning on adding 30 electrified models to its range by 2025.

Now, plug-in hybrids aren’t new to the German brand; indeed, the 60 TFSIe isn’t even the first of its kind from this particular generation of Q7. Before the recent facelift, it was called the Q7 e-tron and featured a V6 diesel engine. However, Audi has now ditched that in favour of a turbocharged 3.0-litre V6 petrol.

When deliveries of the new plug-in hybrid Q7 begin in early 2020, there will be two versions available: the 375bhp 55 TFSIe and the 449bhp 60 TFSIe, which is even more potent than the SQ7. Both have a 17.3kWh battery that gives an official (WLTP) range of 24.9 miles on electric power alone. Yes, the Q7 e-tron claimed 34 miles of electric range, but that car was tested under the older and easier NEDC test.

The potential for electric-only driving, the promise of low CO2 emissions and affordable benefit-in-kind (BIK) tax rates means this type of car makes a lot of sense on paper for some people, but is it a worthwhile alternative in the real world to our preferred version of the Q7, the 45 TDI diesel? 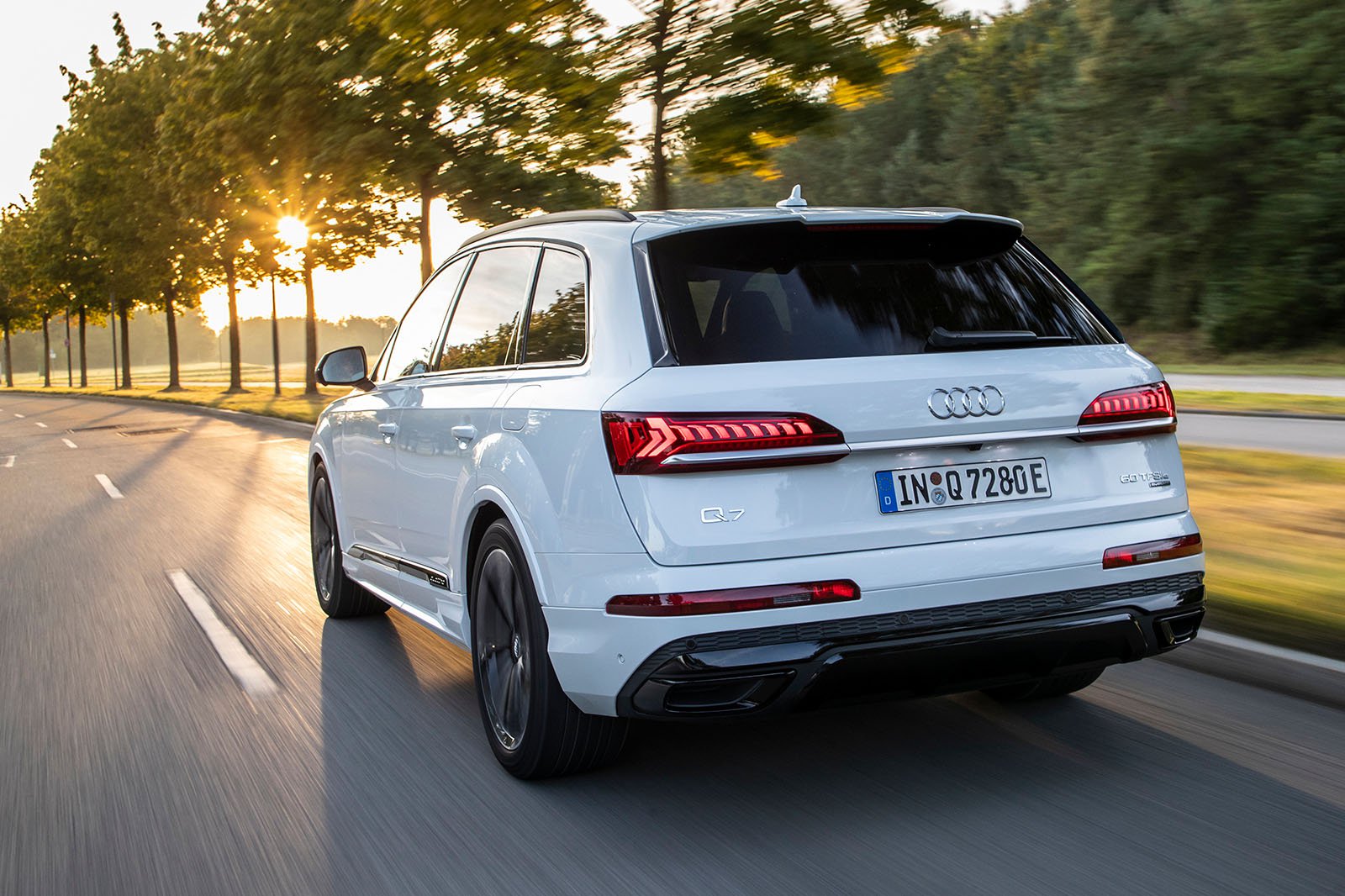 The concept of plugging a big, luxurious off-roader into the mains might seem rather odd, but this is key to the 60 TFSIe's efficiency. If you can charge it frequently, you’ll complete short journeys without burning a single drop of fuel yet still have an engine for long trips at the weekend. That means you won’t be waiting ages to replenish the batteries (although you probably won't collect Costa loyalty points quite as quickly as an electric car owner).

You might wonder why there has been a change in fuel for the plug-in hybrid Q7. Well, it's true that almost every rival, including the class-leading Volvo XC90 T8, is also powered by petrol, but the major reason is that plug-in hybrid SUVs are particularly popular in the US and China, neither of which are ardent fans of diesel.

Both of those nations do like power, though, and the 60 TFSIe certainly has plenty of that. Its electric motor and petrol engine together put out 449bhp, so there's no trouble at all motivating more than two tonnes of SUV. Sure, it's not as quick as the mighty SQ7, due to the extra weight of its batteries, but it's still a fast car.

It also sounds suitably fruity at higher revs when you decide to bury the accelerator pedal into the carpet. And when you’re not harassing sports cars, it's even more refined than a diesel Q7, and near silent in low-speed electric running. In fact, you can hear the artificial noise generated to warn pedestrians far more than the motor itself.

There is a bit of electronic intervention to reign in your enthusiasm, though. The 60 TFSIe has a pressure point in its accelerator pedal travel (like a kickdown point that awakens the engine) to encourage you to remain in electric-only mode as much as possible. It can even send pulses through the pedal to prompt you to lift off when approaching a junction, for example. 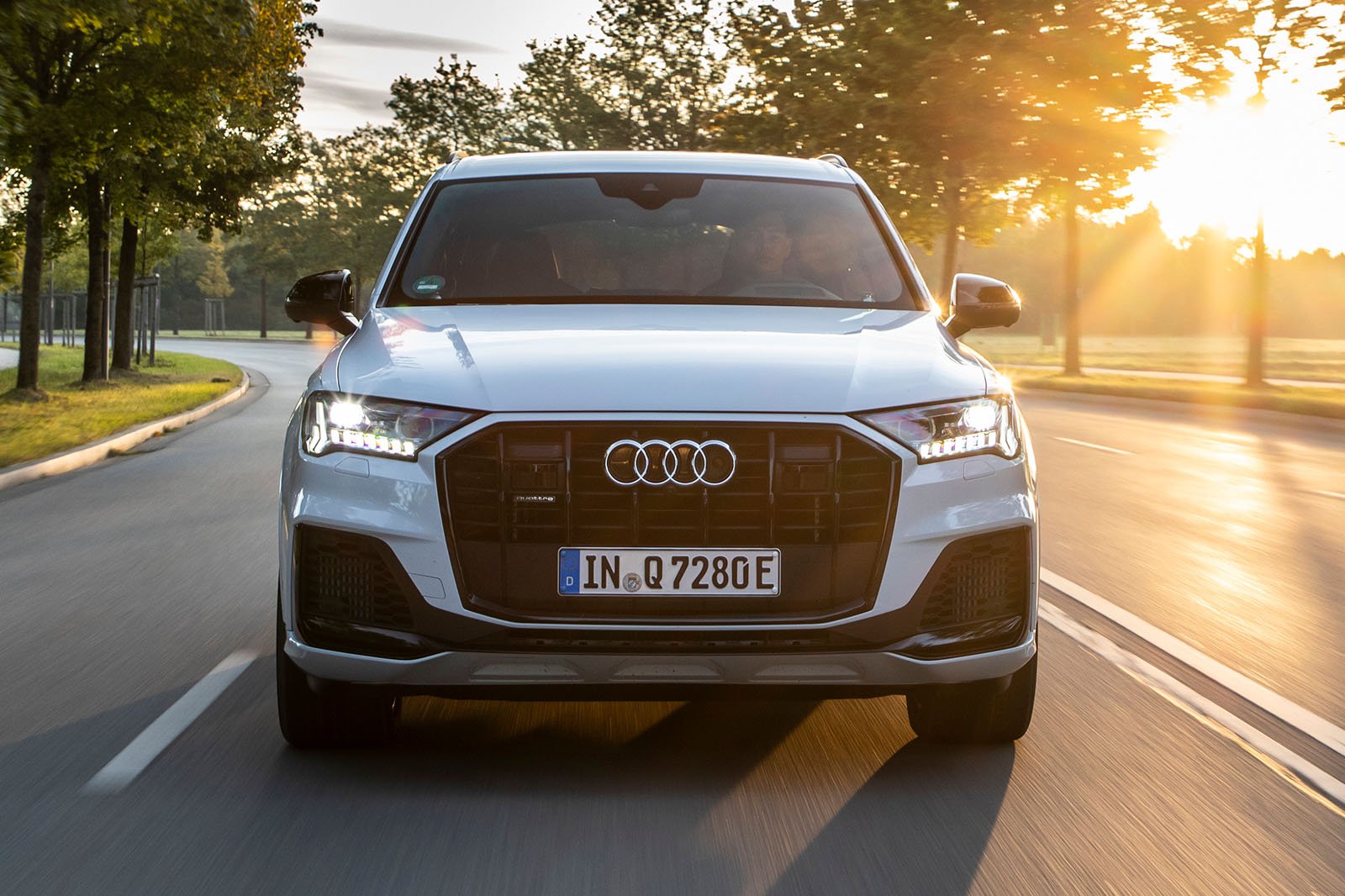 But once the battery is depleted, the 60 TFSIe just becomes a big, petrol-powered SUV lugging around several hundred kilograms of dead weight. That means you’ll need to charge it frequently if you're to beat the economy of a diesel Q7.

The 60 TFSIe is, however, far more polished overall to drive than the XC90 T8; it feels more like a high-riding estate car than a lumbering SUV. The extra weight of its batteries may mean it doesn’t handle as tidily as a conventional Q7, but it’s still much nimbler than its Swedish rival.

It’s also more refined, with far less wind and road noise. The Q7 isolates occupants from nasty road imperfections better than the XC90 – particularly the Vorsprung and Vorsprung Competition models, which get standard air suspension that offers a Comfort mode for a softer ride.

Neither plug-in hybrid SUV is a sporty steer, but the more progressive, natural-feeling weighting of the 60 TFSIe allows you to hold your line through corners more accurately than in the XC90, whose lighter steering can require tiny corrections part-way through a bend in order to follow your chosen arc. 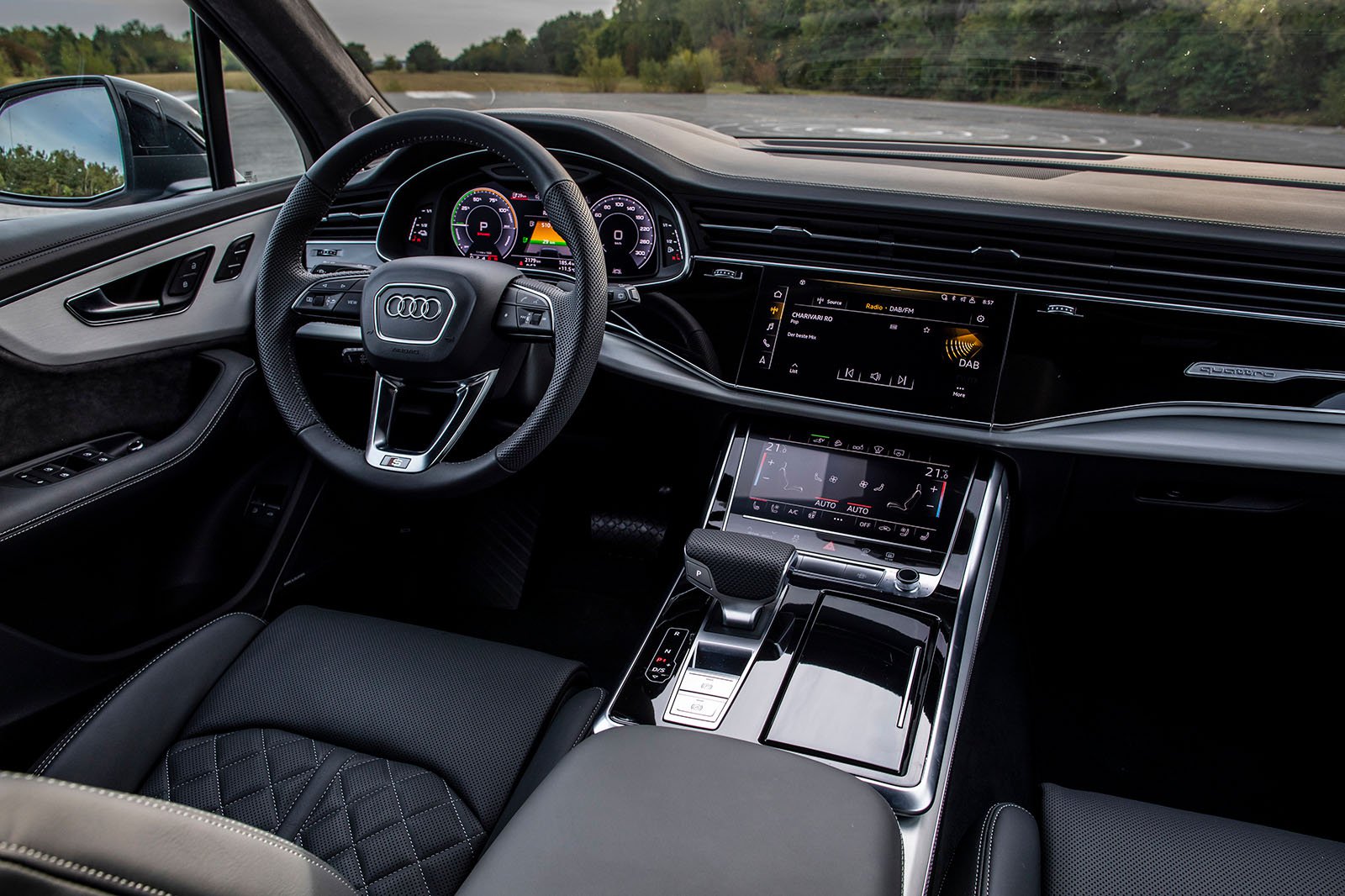 As you’d expect of an Audi, the Q7's interior is awash with high-end, soft-touch plastics, fine-grain leathers and thick carpets. What it doesn’t have over the pre-facelift version, though, is well-damped buttons. This isn’t part of some cost-cutting measure, but because the majority of switches have been replaced by two touchscreens that give haptic feedback. In our opinion, this is a step backwards from the rotary controller interface and physical controls of old, which made using the infotainment system and adjusting the climate control far easier, especially while on the move.

What is the same as before, though, is the amount of space up front and the near limousine-like second row. Sadly, though, the battery still takes up the space normally reserved for the third row of chairs, so the 60 TFSIe is still less practical than the seven-seat XC90 T8.

The boot floor has been raised too, which makes the cargo area smaller than in the normal Q7. Not that this should be a major issue, mind you, since the luggage capacity is still plenty for a family of five; you could take a couple of buggies and some suitcases without having to fold any seats down.

For more about the interior of the Q7, have a look at our main review here. Or to see how much you could save on a new Q7 without any haggling, go to our New Car Buying service.