New Mercedes SL convertible will offer luxury open-air thrills with V8 power – and a hybrid engine version will be added to the range later. Here are all the details...

The Mercedes SL luxury convertible has become the automotive equivalent of the Rolling Stones – delivering the height of extravagance for decade after decade. Like the surviving members of the rock band, though, it's been showing its age for some time.

Fortunately, Mercedes has just revealed an all-new eighth-generation SL-Class model (Star Wars fans will no doubt delight in its 'R232' version name). You can still have a classically brutish 4.0-litre V8 engine, of course, but the German manufacturer is keeping up with the times by embracing hybrid technology too.

The SL is one of 12 cars in contention for the 2022 What Car? Reader Award, which goes to the upcoming model that people are most excited about; you can see all of the contenders and cast your vote here. 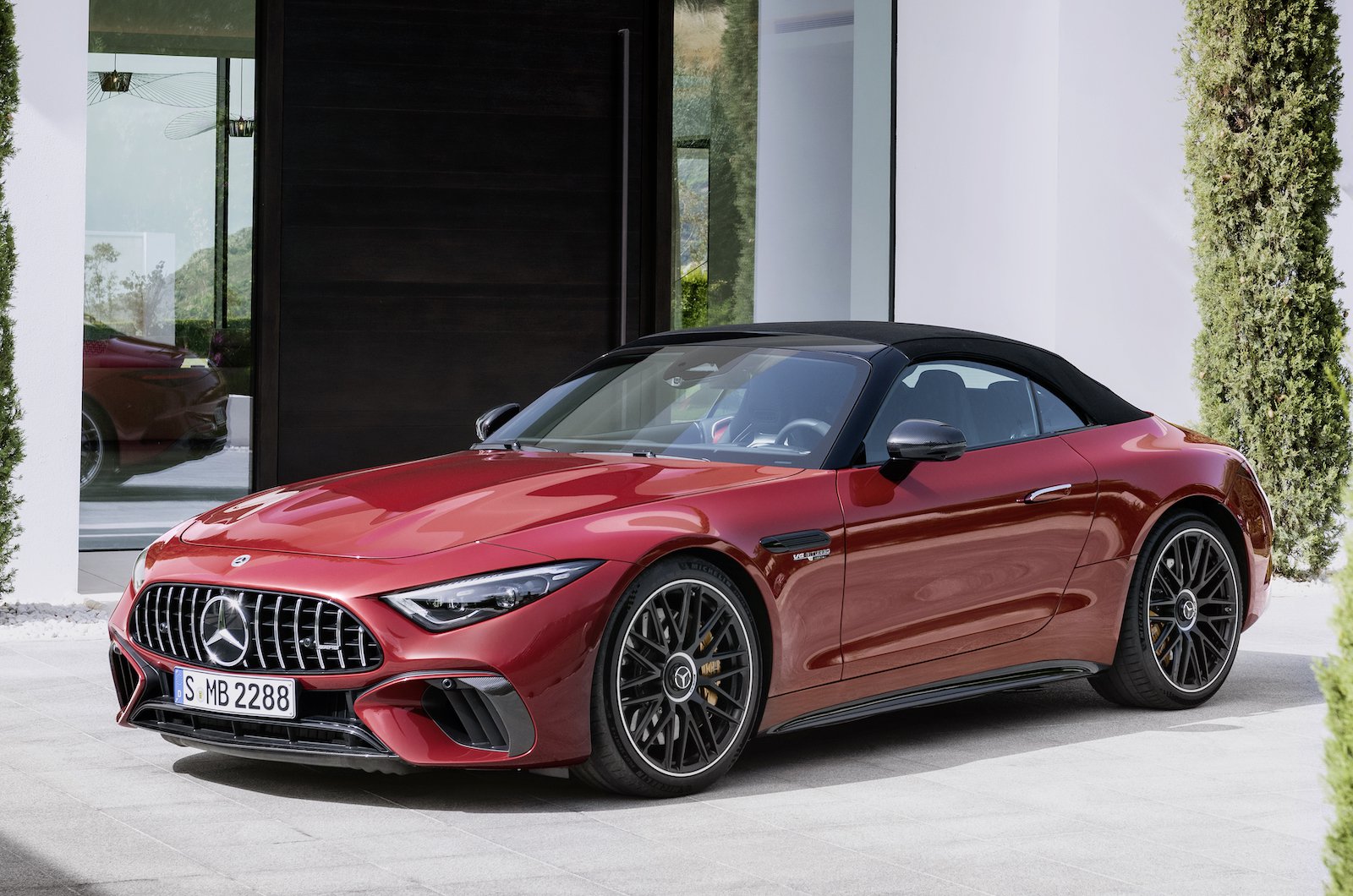 In terms of front-end styling, the new SL gets rakish LED headlights complemented by a chrome-accented grille. The rear spoiler sits flush with the body at low speeds, but lifts up as you pass 50mph to improve high-speed stability.

This should be enhanced further by the presence of four-wheel steering. That allows the rear wheels to turn in the same direction as the fronts above 62mph; below that speed, they turn in the opposite direction for added agility.

The SL 55 model, which will be the entry point to the range at launch, will get 19in alloy wheels. The pricier SL 63 will have 20s as standard, with 21s available as an option on both. It’s worth noting that bigger wheels tend to reduce ride comfort – an area that has traditionally been an SL strength. 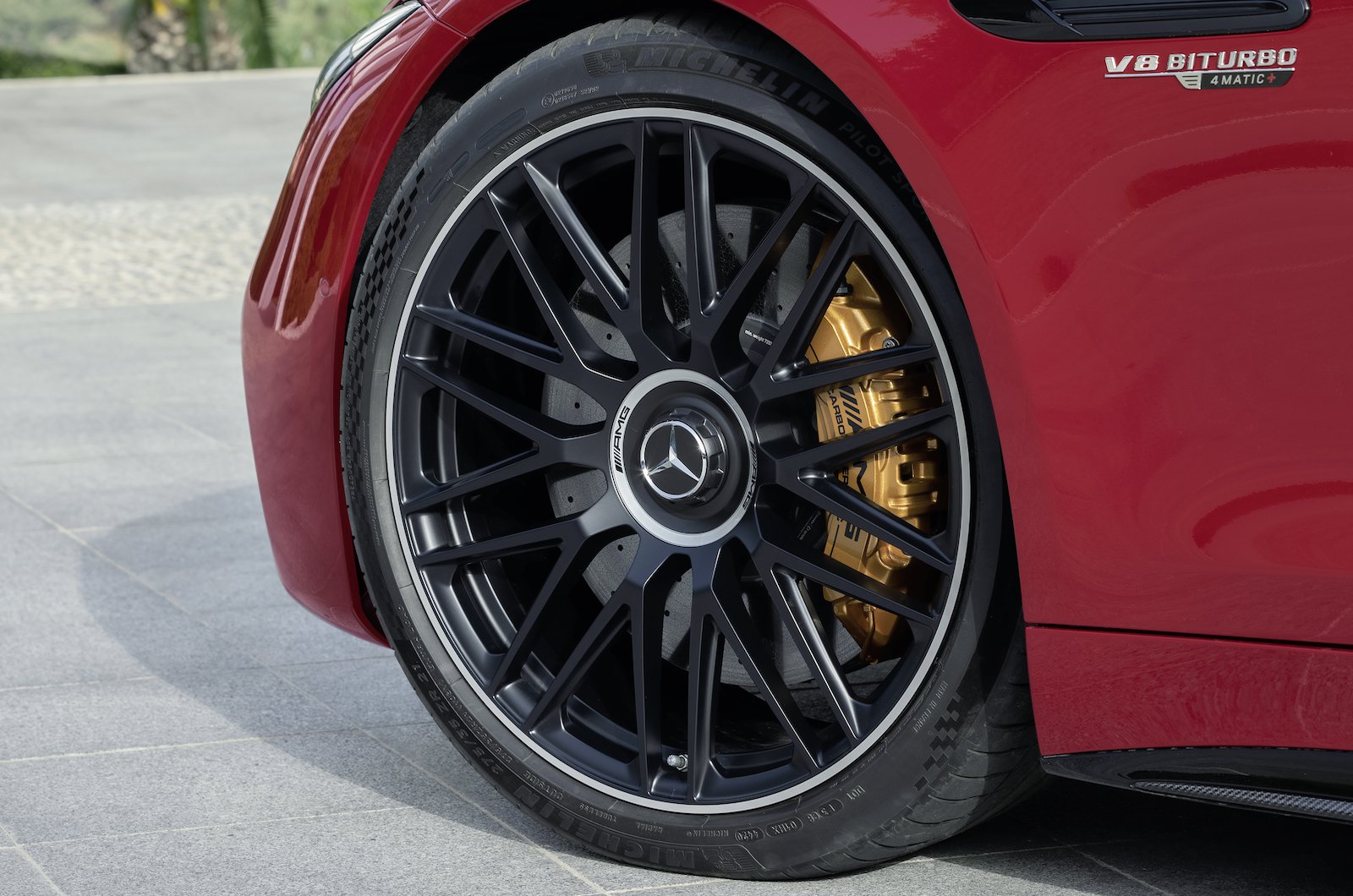 The SL 55 comes with conventional suspension, but the SL 63 swaps this for an active hydraulic system. The active suspension will allow you to soften or firm up the ride to suit your taste, or the road conditions.

Four exterior trim options are available, allowing buyers to tailor their SL’s appearance to their personal preferences. The Chrome Package, as its name suggests, adds chrome accents to the front and rear bumpers, and along the sills. The Night Package has gloss black accents. Night Package II makes the car look even more like the Batmobile. Finally, the Exterior Carbon Package mixes some of the gloss black with carbon fibre.

Topping the SL is an electrically-operated fabric roof, available in red, black or grey, and able to fold up or down in about 15sec at speeds of up to 37mph. That might seem like a backwards step compared with the previous model’s folding metal roof, but it means you get far more luggage space when the roof is stowed. Mercedes says you can fit two golf bags, whereas the old car struggled to accommodate a single hard-shell suitcase. 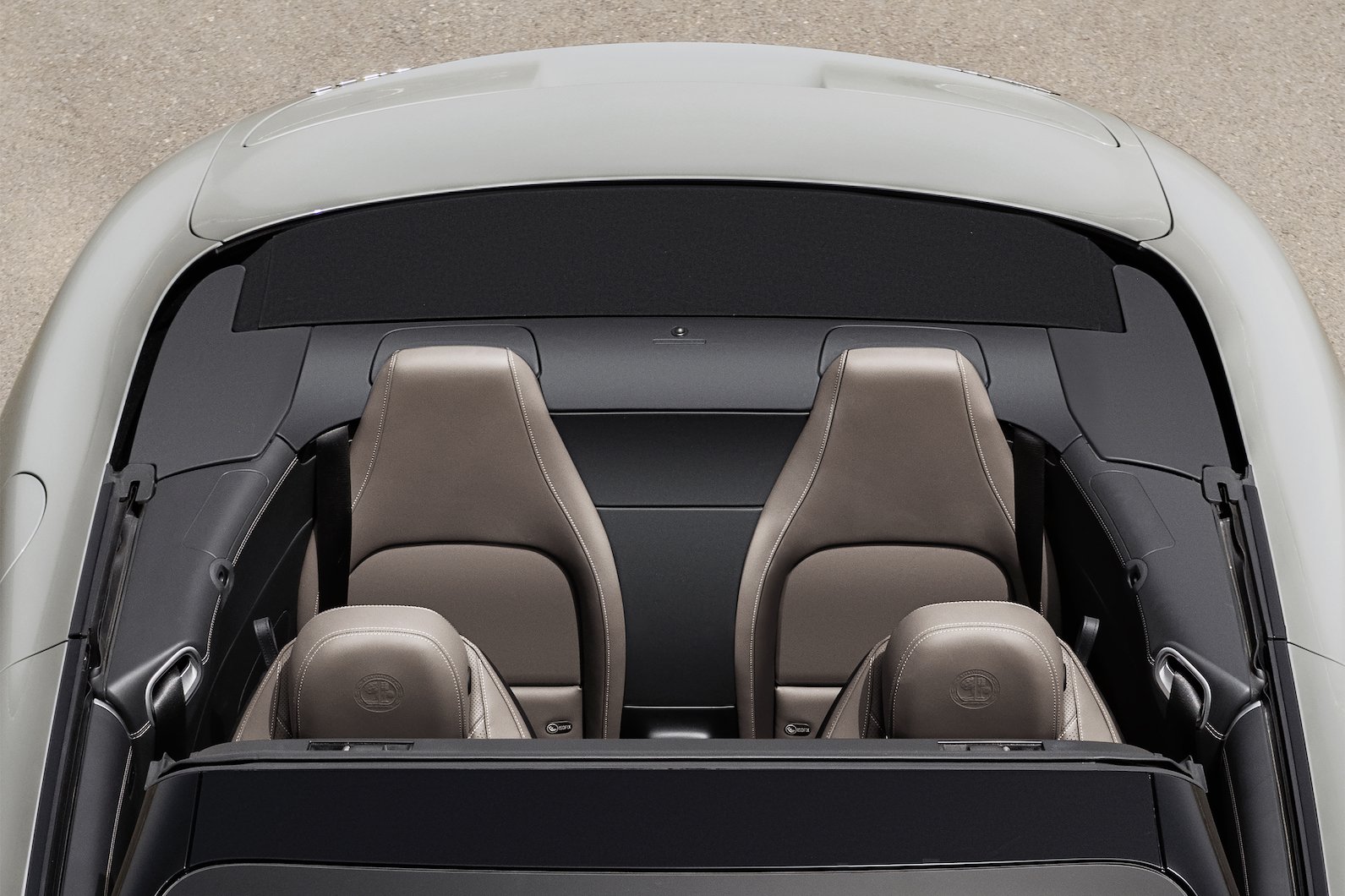 Unlike the outgoing SL, the new car has rear seats, too, although they are only suitable for people up to 1.5m tall (or 1.35m tall in a child seat). They are most likely to be used as an additional storage space

The front seats can be specified with a massaging function, or swapped for sports seats that adjust the tightness of their bolsters based on the driving mode selected.

Instrumentation is displayed on a 12.3in digital driver display screen, while infotainment is controlled through an 11.9in portrait-oriented touchscreen, which is rake-adjustable so you can change the angle to reduce glare.

The touchscreen runs an updated version of the operating system used in the new Mercedes S-Class, which is encouraging, because that has sharp graphics and responds quickly to inputs, although it can feel a bit clunky when you’re scrolling through lists. Voice control and Apple CarPlay and Android Auto smartphone mirroring are all included. 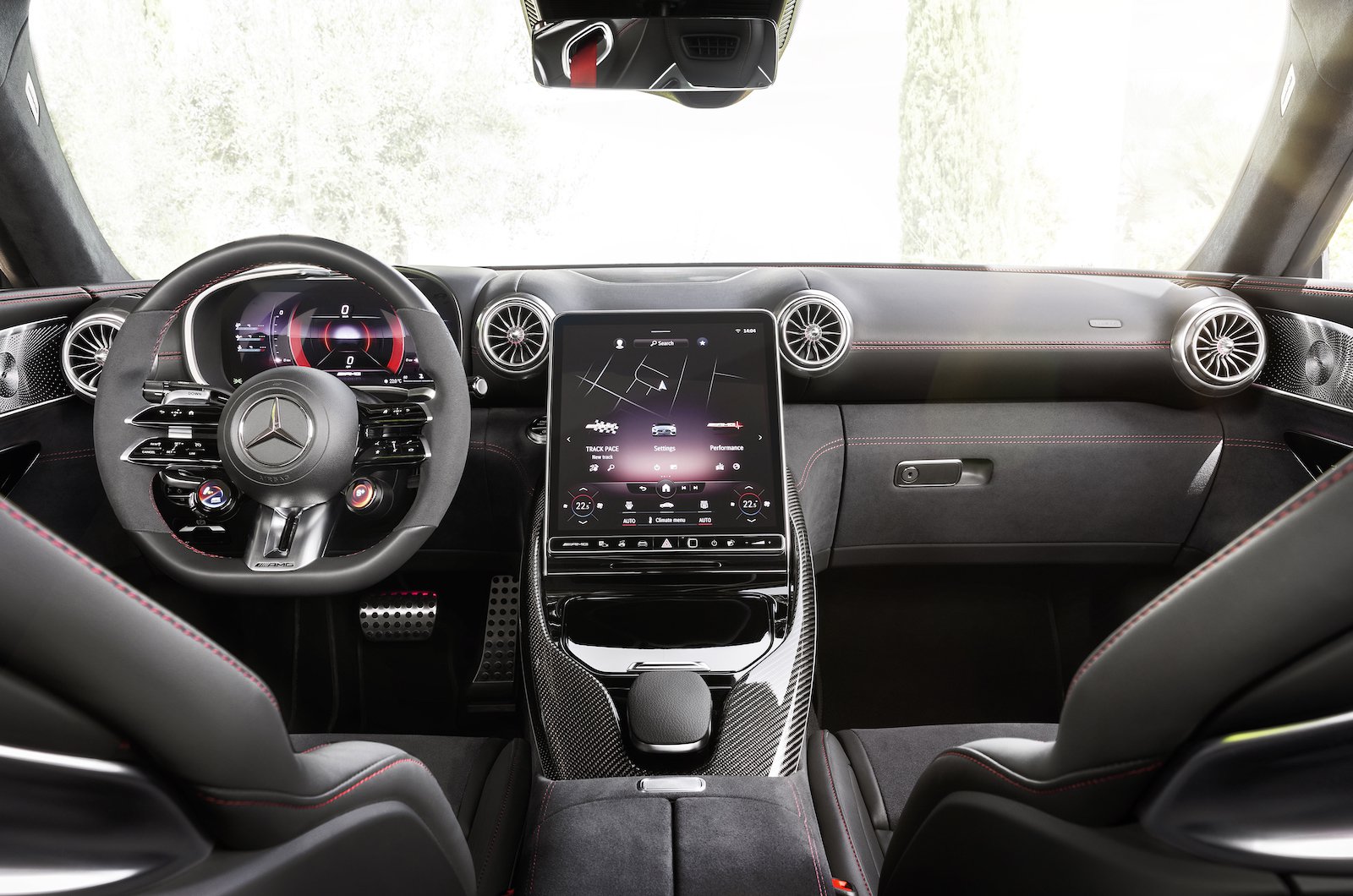 Power will initially come from a 4.0-litre V8 with twin turbos, producing 469bhp in the SL 55 or 577bhp in the SL 63. These models require just 3.9sec and 3.6sec respectively to accelerate from 0-62mph, so they sandwich the performance of the Porsche 911 Carrera S.

The SL’s power is delivered to the road through a nine-speed automatic gearbox, which can also be manually controlled using two paddles behind the steering wheel. For the first time in the history of the SL, four-wheel drive is standard, although Mercedes has yet to confirm whether later cheaper versions will revert to rear-wheel drive.

What we do know is that the range will quickly expand to include a range of twin-turbo V6 engines – including a hybrid, which could have as much as 450bhp. 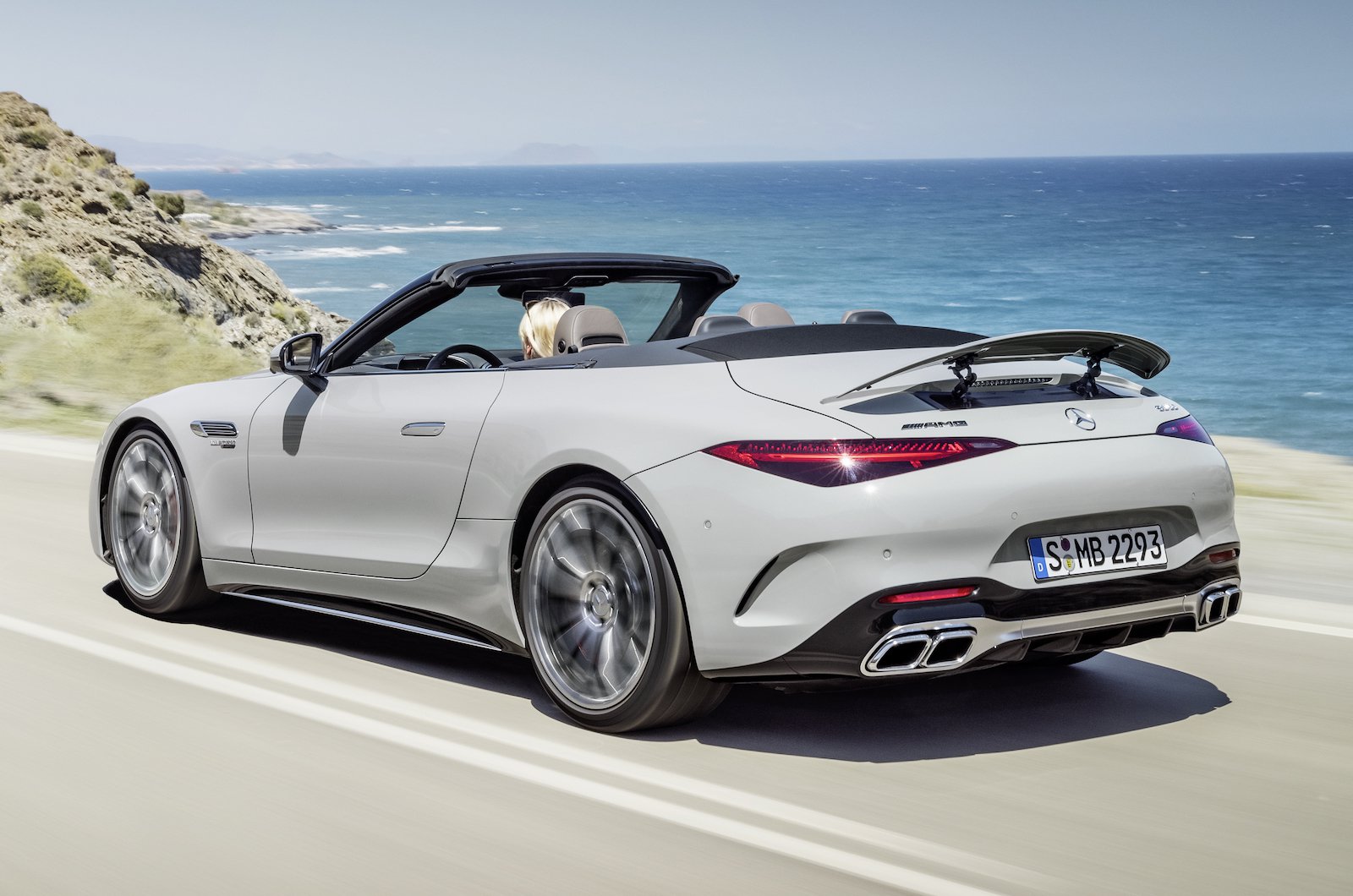 The SL comes with a long list of standard safety equipment, including blind-spot monitoring, lane-keeping assistance and a system that automatically detects stop signs, red lights and motorway gantries, warning you if you’ve failed to react appropriately.

The likely £90,000 price tag of the SL 55 places it in competition with high-spec versions of the BMW 8 series Convertible and cheaper Porsche 911 Cabriolets. The SL 63 will start at around £115,000, putting it head to head with the BMW M8 and Aston Martin Vantage, with which it shares the 4.0-litre V8 engine (although the Vantage extracts 503bhp).

It’s worth noting that the outgoing SL is one of the faster depreciating cars. It’s too early to know how the new version will perform in this respect, so you might want to consider leasing or buying on PCP finance so you don't have to worry about its resale value.