The Porsche 718 Cayman GT4 RS receives a beefy heart transplant from its 911 stablemate to become the most thrilling version of the sports coupe...

Every now and then, car makers are able to let their hair down and create something that’s a little bit bonkers to reignite people’s passion for cars. And this Porsche 718 Cayman GT4 RS is arguably the most entertaining car Porsche currently makes.

How? Well, if you wanted to cherry-pick all the best bits from the brand’s range of sports cars, you could very well end up with the GT4 RS's concoction of ingredients. You have the incredibly special, high-revving engine from the Porsche 911 GT3 combined with the smaller, lighter and more balanced mid-engined setup of the Cayman coupé.

Porsche hasn’t stopped there, though. The GT4 RS is 35kg lighter than the standard GT4, thanks to a thinner rear windscreen and less sound insulation, while the bodykit is even more aggressive, with a larger, raised rear wing, additional vents up front on the bonnet and wheelarches, and a protruding front splitter that could peel the top layer off the road surface.

Previously, this wouldn’t have been a clever business idea for Porsche, as it could (understandably) steal sales from the 911. But since the next-generation Cayman is expected to be propelled purely by electric motors, the Cayman GT4 RS seems to be the ultimate swan song as we bid a proper farewell to this petrol-powered sports car.

Is this the Porsche we’ve all been waiting for? Let’s find out.

Since the biggest change in the GT4 RS relates to the engine, we’ll start with that. The 4.0-litre flat-six engine sounds a little agricultural on start-up, with a deep-sounding, lumpy idle that transmits a few subtle vibrations felt through the seats.

You immediately notice how loud the engine is when sitting inside the GT4 RS and that’s because the carpeted floor that’s normally seated on top of the engine bay behind the seats has been removed altogether. If you wanted to, you could physically turn around and touch the exposed engine cover.

As a result, your ears are exposed to a much more unfiltered sound, with plenty of hisses and whooshes to accompany the engine note as soon as you set off. This is helped by the additional side-mounted air intakes fitted where the rear quarter windows are found on regular models, funnelling extra air past the back of your head and into the engine.

It can take a bit of commitment to aim for that every time (especially if you’re used to shifting sooner on lower-revving, turbocharged motors) but the reward is incredibly satisfying – especially from an aural point of view. 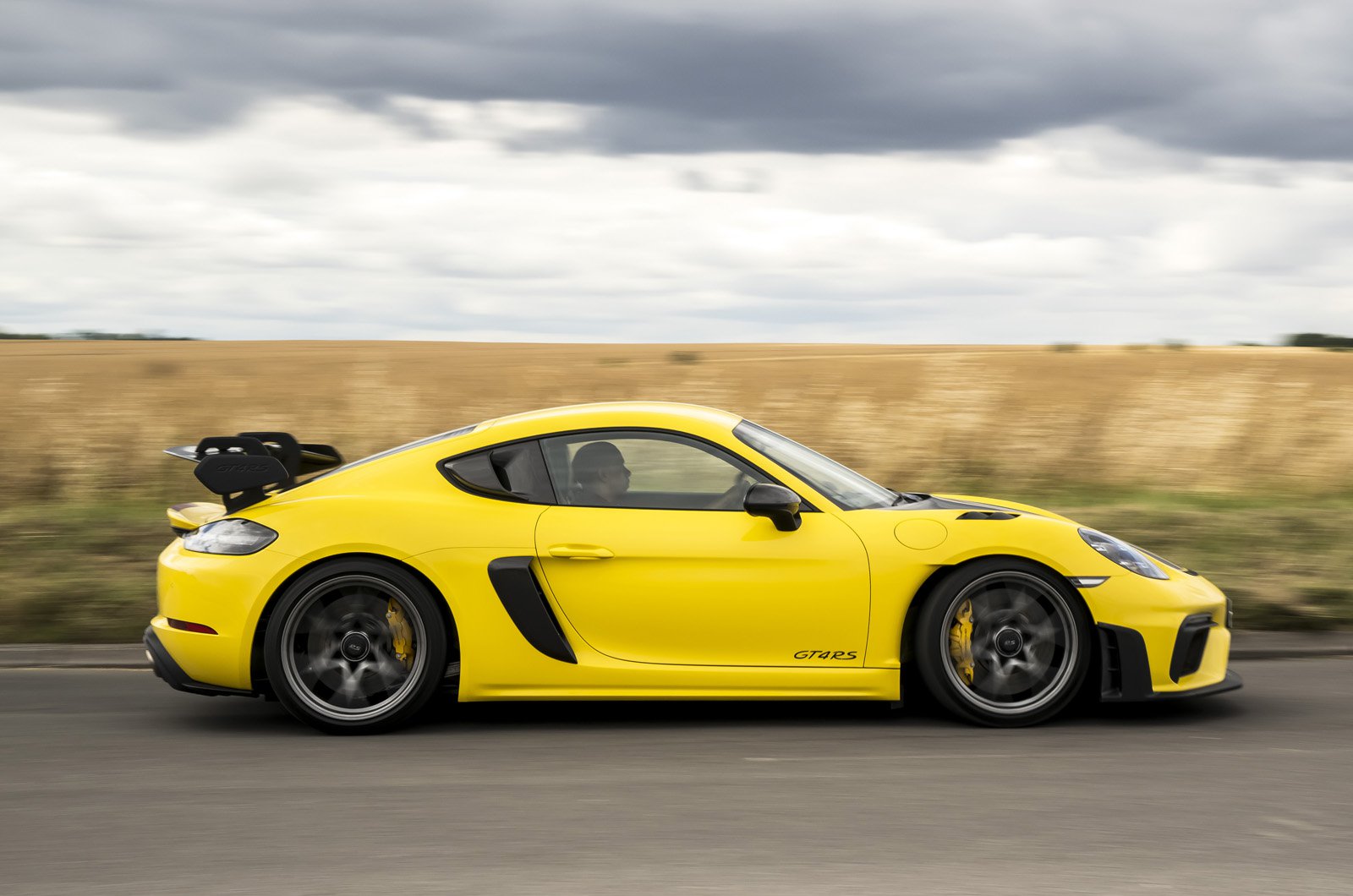 You see, the standard six-cylinder Cayman already sounds great, but the GT4 RS indulges you with an addictive, fizzing note at the very top end of the rev range. And because you’re effectively sharing an extended echo chamber with that motor, the end result is incredibly immersive, with a wonderfully unique concoction of sounds and noises swirling around your head before piercing your eardrums.

If you want to hear more from the engine bay, the accelerator pedal acts as a foot-operated volume control, except one that already starts at level 8, before moving up to around 15. It's so loud that wearing a helmet on a track day might actually bring a welcome layer of sound insulation during prolonged hard driving.

As with the standard GT4, the seven-speed automatic gearbox is lightning fast when it comes to shifting gears and you can knock the gearlever to the side and shift gears manually (nudging the lever back and forth, like a sequential 'box), or use the paddles mounted on the steering wheel. Those hoping to use a clutch pedal with a gated manual gearbox will have to stick with the standard Cayman GT4 – or try to track down a 911 GT3, if they’re particularly attracted to this engine. 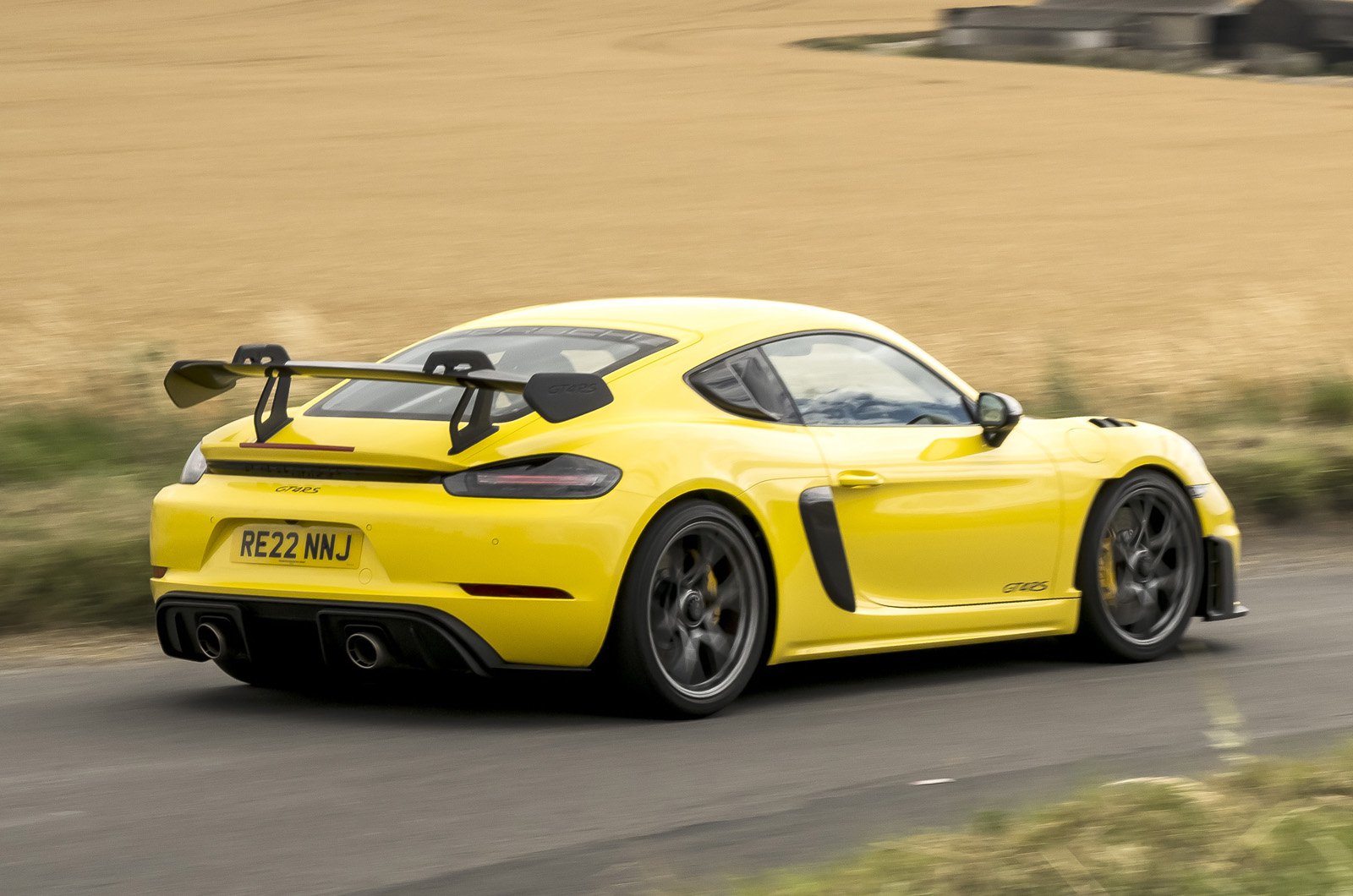 With modified suspension components, including tweaked springs, dampers and anti-roll bars, the GT4 RS is even more poised than the already-impressive GT4.

The adaptive dampers can be switched to a firmer setting at the press of a button, but the GT4 RS handles beautifully even without it. The standard setting allows for a little more pliancy to better deal with mid-corner bumps.

The steering isn’t too heavy and is wonderfully precise, while the optional ceramic brakes on our test car fill you with confidence as soon as you press the pedal.

Indeed, the 911 GT3 – never mind the GT3 RS that’s due soon – with its prodigious levels of grip and traction is ultimately more capable. However, the lower limits of the Cayman means it's more playful at regular road speeds and a little less serious about lap times. In essence, that accessibility makes it a bit more fun for road use.

Could you use the GT4 RS every day? Well, to cover a long journey in the GT4 RS would be for novelty reasons. Yes, the switchable sports exhaust can reduce the amount of drone it generates when cruising on the motorway, but the engine is so dominant it drowns out any form of wind or road noise that may be filtering through from the outside world. Meanwhile, the lack of sound deadening means you'll hear stones pinging off the bodywork, and the suspension thumps quite harshly over cat's eyes.

And while it has two-zone climate control, the air conditioning will struggle to fend off the heat from the engine bay, especially on a hot summer’s day. 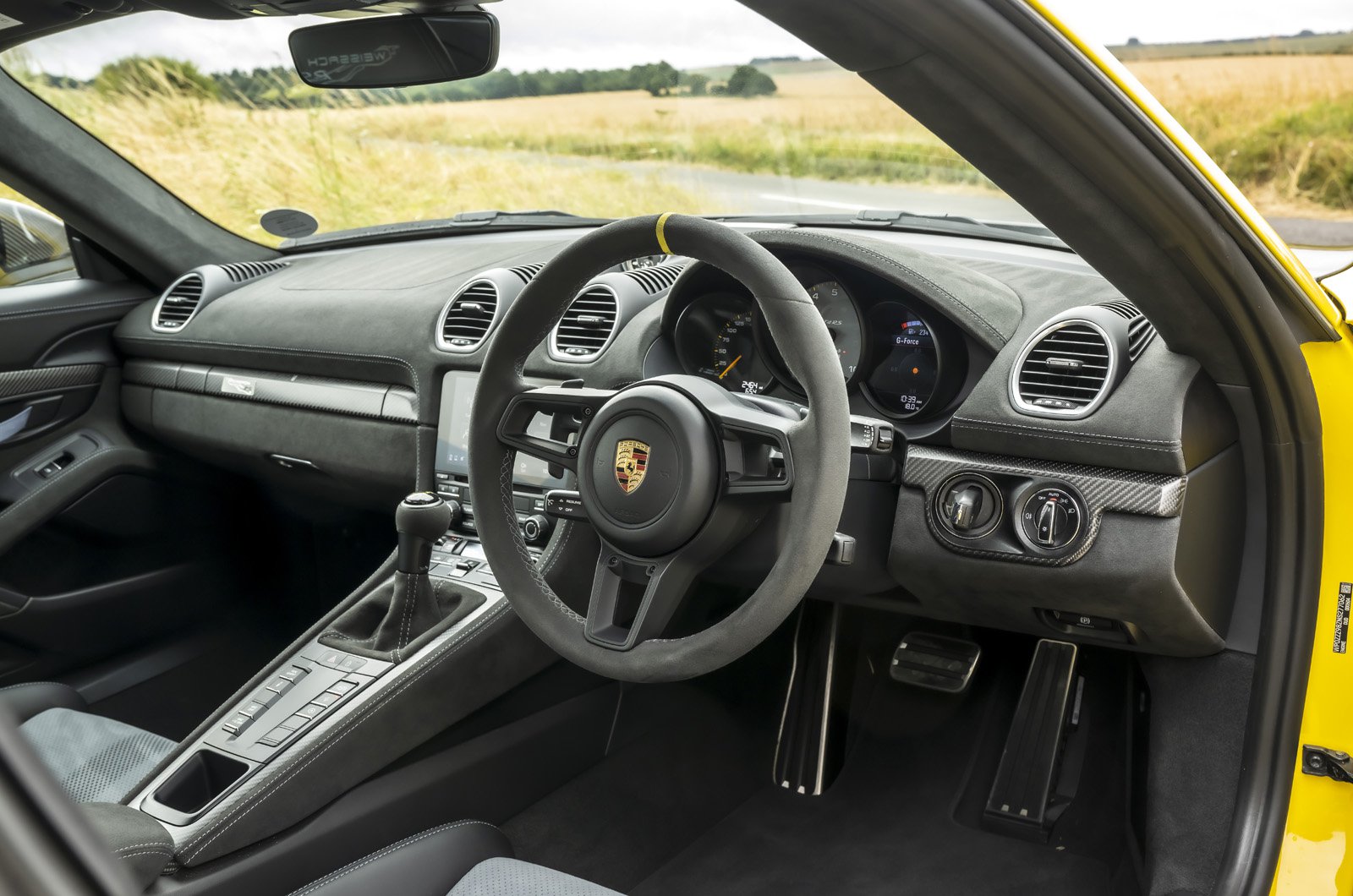 Apart from GT4 RS logos dotted around the interior, a gearlever from the 911 GT3 and full bucket seats as standard, the GT4 RS is mostly the same as every other Cayman inside, which you can read about in our full Porsche Cayman review.

The optional Clubsport Package brings a rollcage behind the seats and a fire extinguisher. There’s also the Weissach Package that fits a rollcage made of titanium and an exhaust system partly made with the same material, along with carbonfibre exterior components, including the bonnet, air intakes and rear wing.

Other options include lighter 20in magnesium wheels, even lighter bucket seats with 3D-printed components, and a nose-lift system that increases the ride height over the front axle by 30mm, reducing the chances of scraping the bumper over speed bumps. 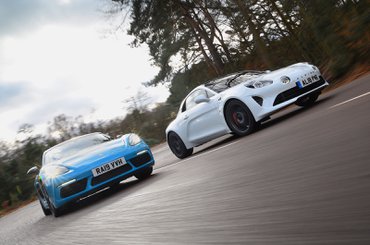