More for you |
Every 5-star car on What Car?Used test: Maserati Levante vs Porsche MacanNew issue of What Car? magazine on sale nowMost and least reliable small SUVsRevealed: the car makers whose discounts have got bigger since lockdown
Home
News
75 for school-run parking space
news

* New scheme on trial in Richmond * High-emitting cars will be charged to park * Rest of country to follow suit?... 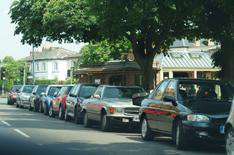 Parents who drive the most polluting cars may be charged to park outside schools if current plans get the go-ahead.

A trial of the scheme will begin in the London borough of Richmond Upon Thames this September, and could be rolled out across the country if it proves successful.

At present, parents at 13 schools in Richmond are given free permits to park on double-yellow lines or in special parking bays for 10 minutes when they drop off and collect their children from school.

However, from September, drivers of cars with high carbon dioxide emissions will have to pay 75 for the permit. It will remain free for drivers of lower-emitting cars, although the exact definition of high and low-emitting cars has yet to be set.

While supporters say the charge will affect only drivers of high-emitting 4x4s and MPVs, critics say larger families that need bigger cars will be unfairly penalised.

The RAC Foundation's Sheila Ranger said: 'This is yet another stealth tax that is hitting the family budget. For many parents, it is necessary to have a large car because they have three children who need car seats.

'It would be better if there were incentives to drive smaller cars - such as parking closer to school - than financial penalties for driving larger cars.'

An estimated one billion school run trips are made in the UK each year.