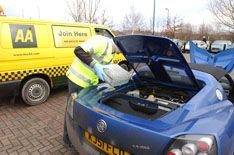 AA patrolmen could strike for the first time in the organisation's 105-year history, after a row over pensions.

Thousands of patrolmen and other staff will be consulted on whether or not to take industrial action. If they vote to strike, it could leave the AA's 15 million customers without breakdown cover.

What's happened to the pensions?
According to unions, a 190 million hole in the organisation's pension scheme has resulted in the AA's management calling for an increase in contributions, and a reduction in the amount paid out.

The AA is mainly owned by a group of private equity companies.

The Independent Democratic Union (IDU), which represents many AA workers, claims that the cuts are being made ahead of a rumoured stock market flotation later this year.

Although the AA's management has improved its initial offer to cap pensionable salary increases at 2.5%, but the IDU wants the pensions to be linked to inflation.

Alistair Maclean, national secretary of the IDU, said. 'It is appalling that AA staff have worked flat out through the worst winter conditions in 30 years, only to be told by the gluttonous private-equity fat cats that they want to squeeze more blood out of the stone to line their own pockets.'

However, a spokesman for the AA said: 'We have an excellent pension scheme, however there is a big deficit that needs to be addressed. We need to make changes now in order to keep it viable. The defined benefits scheme is absoultely crucial to us.'