Across Europe in an electric car: 14 countries in 24 hours

Is it feasible to go on a good old-fashioned European driving holiday in an electric car? We find out – and try to break a world record in the process...

The European road trip has long been a signature adventure for us Brits. Be it heading off to Northern France to fill up your boot with vast quantities of wine, or driving south towards the Alps in search of the world’s greatest ski slopes, there really is nothing like the feeling of freedom that comes with exploring mainland Europe by car. And that’s just the romantic element.

Even if you’re not Jack Kerouac, choosing to travel by car comes with numerous practical benefits. Not only can you avoid spending countless hours in crowded airports, but your car provides you with a safe space when travelling and ensures you’ll be able to get around once you reach your destination. 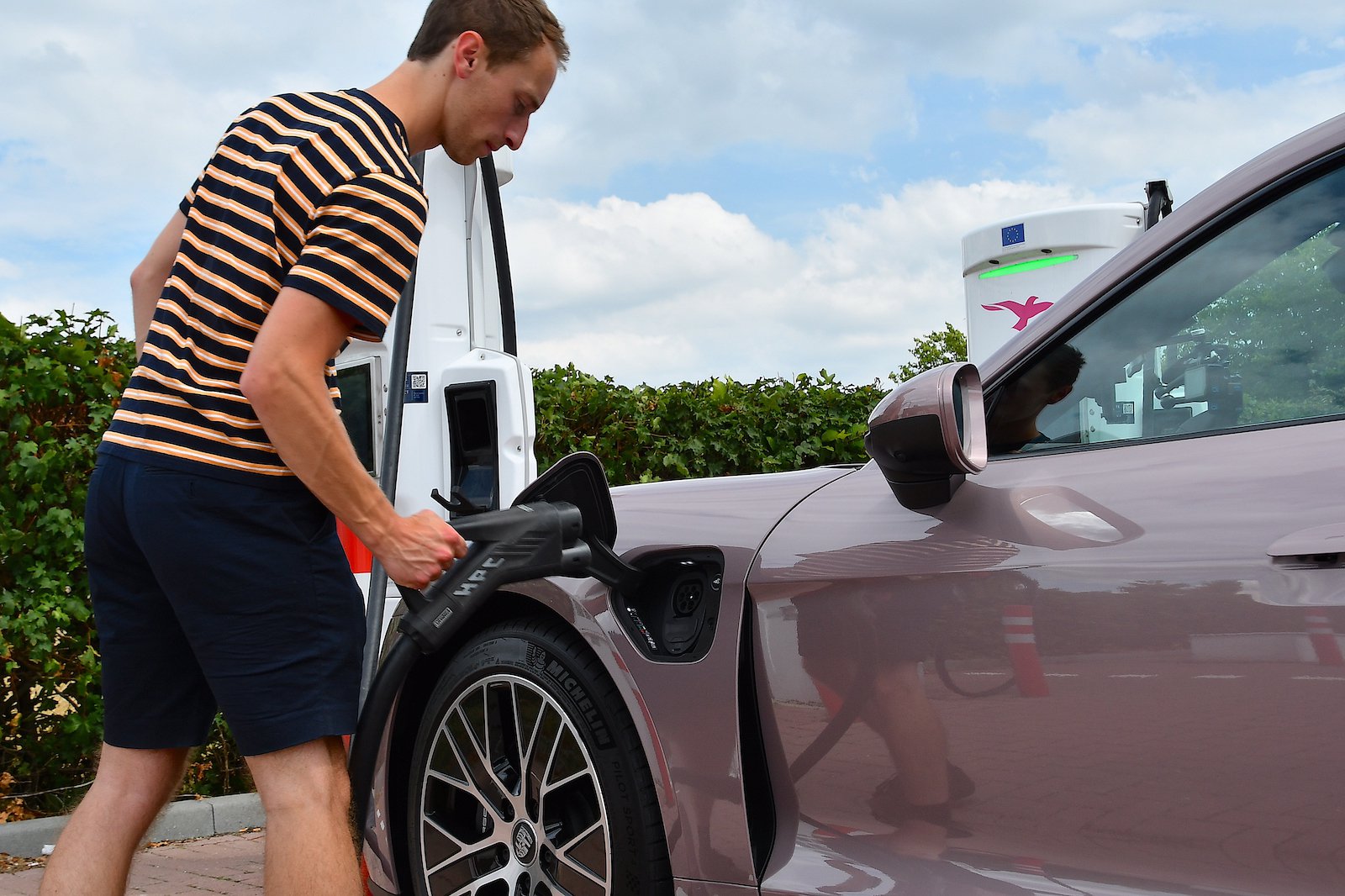 But what, you might ask, is going to happen to the European drive holiday as we transition to an all-electric future? Surely the challenge of learning a new charging network, combined with the fact that electric cars (EVs) tend to have limited ranges at motorway speeds, will make a European trip more hassle than it’s worth?

Well, we decided the only real way to find out for sure would be to get out there and undertake our very own all-electric European road trip. And to make things a little more interesting, we thought we’d set ourselves a rather ambitious target by seeing how many countries we could visit in 24 hours. The theory being that, if we could drive almost the entire breadth of mainland Europe in less than a day, you should hopefully have the confidence to undertake your annual family trip in an EV.

Just a few years ago this kind of adventure would have only been an option for Tesla owners thanks to the company’s widespread Supercharger network, but thankfully, that is no longer the case. Over the past few years a joint venture called Ionity – formed by the BMW Group, Ford Motor Company, Hyundai Motor Group and Volkswagen Group – has been rolling out 350kW charging stations across the Continent. Because they’re intelligently placed on the most commonly traversed throughfares, we found it surprisingly easy to schedule in six charge stops along our route, none of which required a major detour. 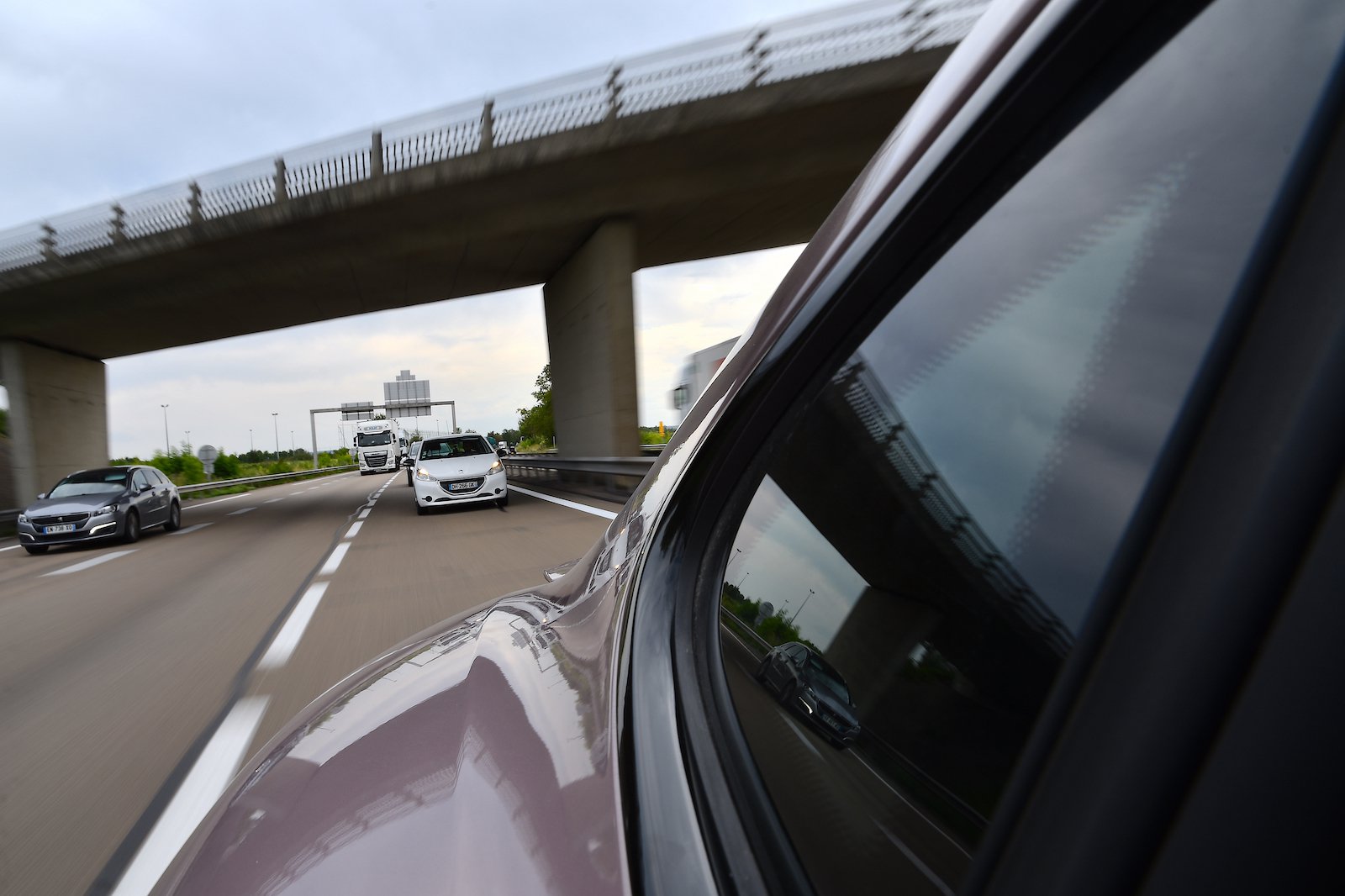 Now, six stops might sound like a lot of down time, but for those who are unaware, 350kW is a seriously quick charging rate. So quick, in fact, that most cars on the market are not capable of taking advantage of such speeds (a Volkswagen ID 3, for example, is pegged at 130kW), which is one of the reasons we chose a Porsche Taycan to be our long-distance companion. With a maximum charge rate of 270kW, a 10-80% charge should in theory take around 20 minutes, adding more than 200 miles to the range in around the time it takes to take a comfort break or grab a coffee.

Speaking of theoreticals, Google Maps calculated it would be possible to visit 13 countries in 19 hours and 30 minutes. Add in six 30-minute charging stops and a couple of 20-minute border crossings and that adds up to a total time of 23hr 10min. Tight but achievable. It also would give us an unofficial record; Audi achieved 10 countries with its E-tron back in 2019 as part of an Ionity promotional event, but we’ve never heard of any other team visiting more countries in a non-stop run in an electric car using no other method of transport within a 24-hour period. Game on. 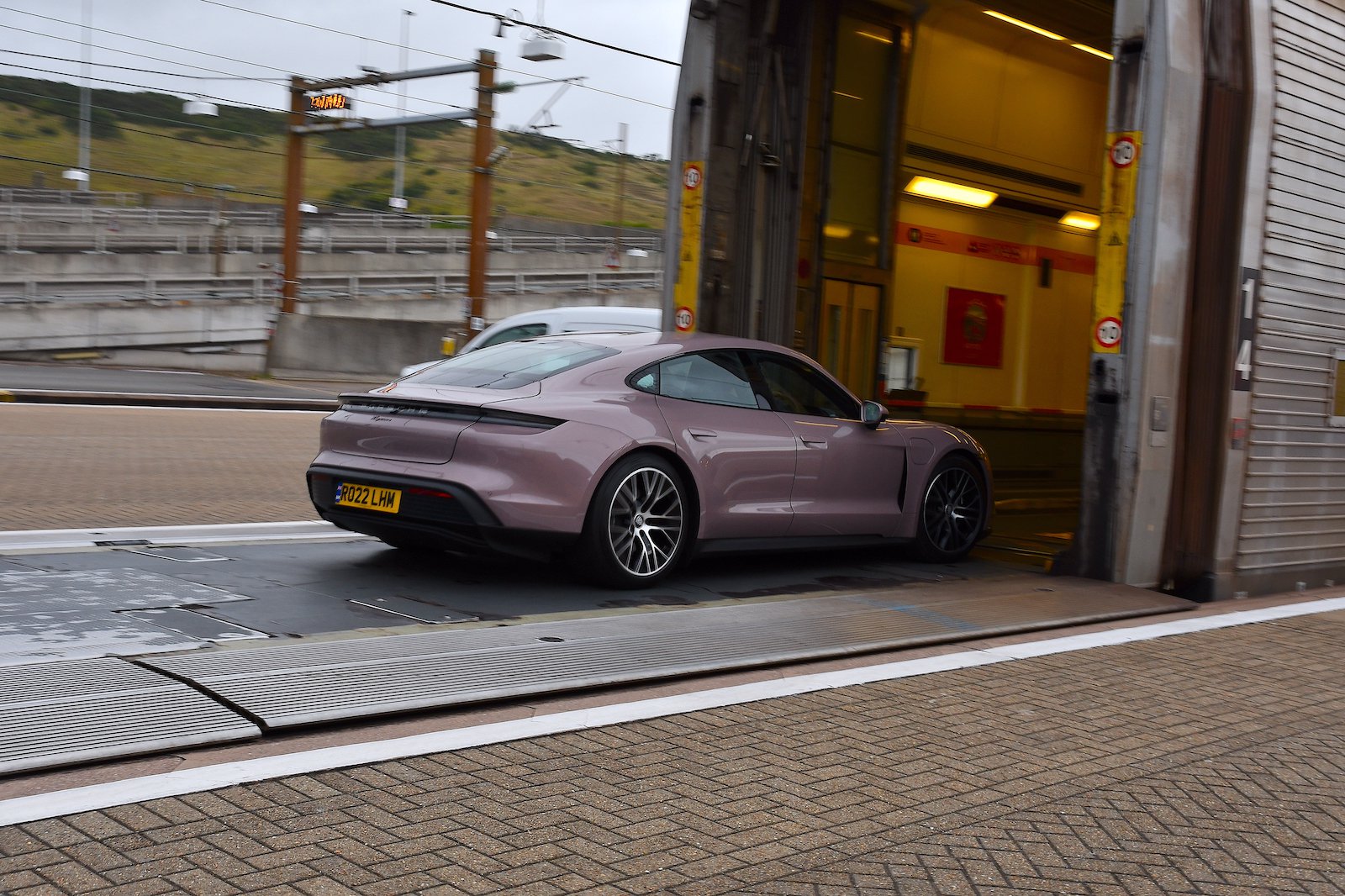 The plan was relatively simple. By charging the Porsche Taycan to 100% before boarding the Eurotunnel to France, we would easily have enough range to reach our first charging stop in the Netherlands, located just over 200 miles away. Then it would simply be a case of charging the car back to full before heading to our start point – a small church car park located close to the border with Belgium.

So why, you might ask, did we stop for a top-up near Dunkirk shortly after disembarking the tunnel? Well, in all honesty, we just didn’t trust the Taycan quite yet. Despite Porsche telling us how efficient the Taycan would be at speed on account of its slippery aerodynamics and clever two-speed gearbox, we seriously doubted that it could get close to its official 301-mile range while sitting at around 70mph – a doubt seeded from our experience covering big distances in other EVs.

Mercifully, this feeling did not last long. After just a couple of hours behind the wheel en route to the Netherlands, photographer John Bradshaw was the first to notice that the Taycan’s predictive range was decreasing at a steady rate of around one to one – one mile lost from the readout per one mile covered. This predicted range, combined with a relatively quick charge in Sevenum, where the peak speed hit a respectable 150kW, gave us the confidence to crack on with the attempt. 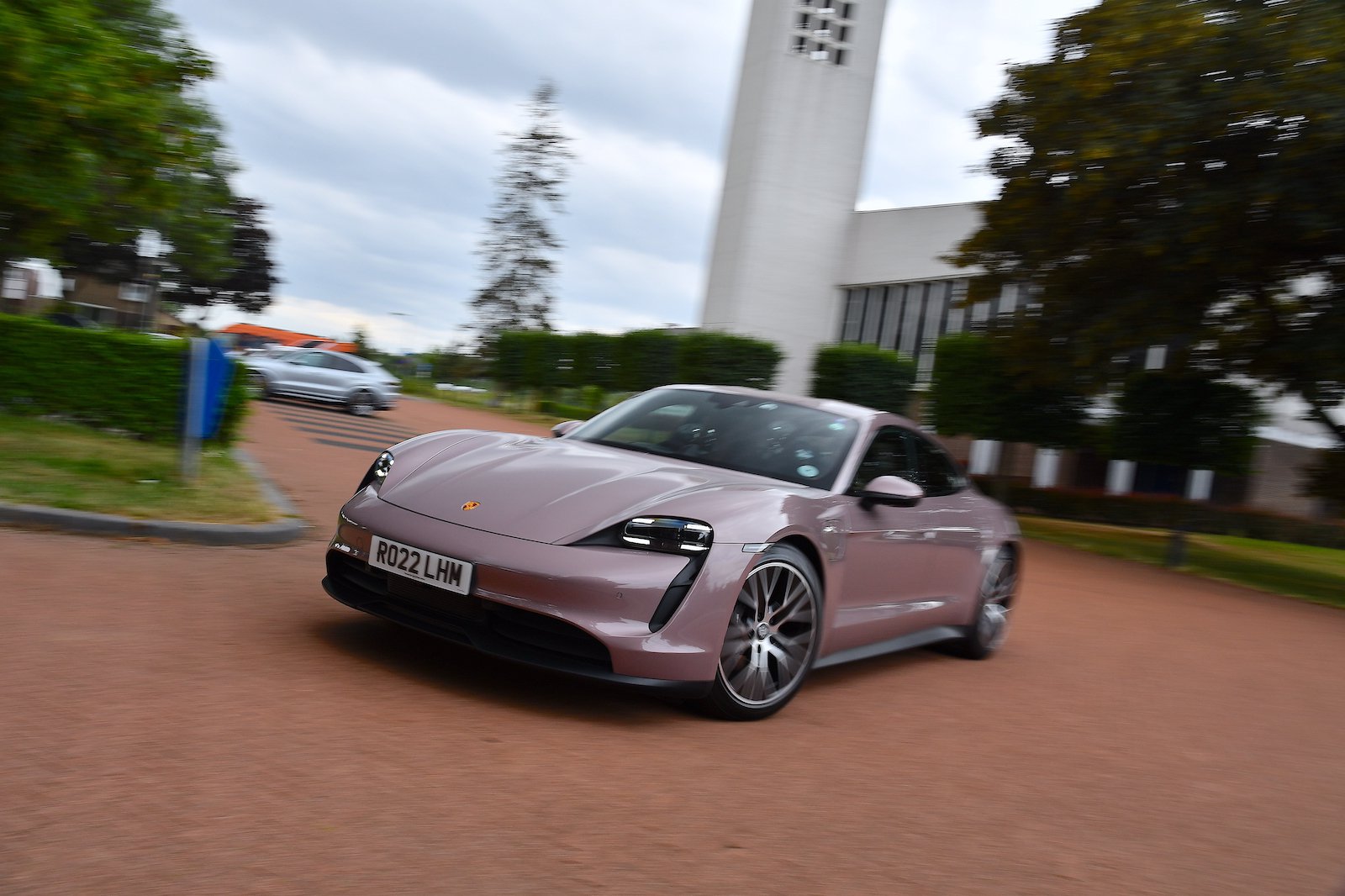 It didn’t take us long to abandon our scheduled start time. Initially we were planning to set off at 7pm to miss any rush hour traffic, but when we arrived in the small town of Eijsden on the Netherland-Belgian border just before 4pm, we felt fresh and were keen to get going. Plus Google Maps indicated the traffic was clear.

Satisfyingly, it took less than five minutes for us to reach Belgium (at 4.03pm) whereupon we set the cruise control at the legal limit of 120km/h (75mph) and cruised effortlessly down to country number three, Luxembourg. Which is where things started to go south. Luxembourg may be 10 times smaller than neighbouring Belgium, but at rush hour the mass exodus of workers leaving the country caused an unforseen jam that robbed us of 20 minutes. Not disastrous, but not ideal.

And to add insult to injury, when we reached our first official charge point of the record attempt in Hauconcourt, France, it was incredibly busy. We managed to nab the last available charger, but with five other vehicles charging at the same time, we saw a peak charging speed of only 72kW. The result? It took around 45 minutes to get to 75%, at which point we decided to cut our losses and head to Germany. 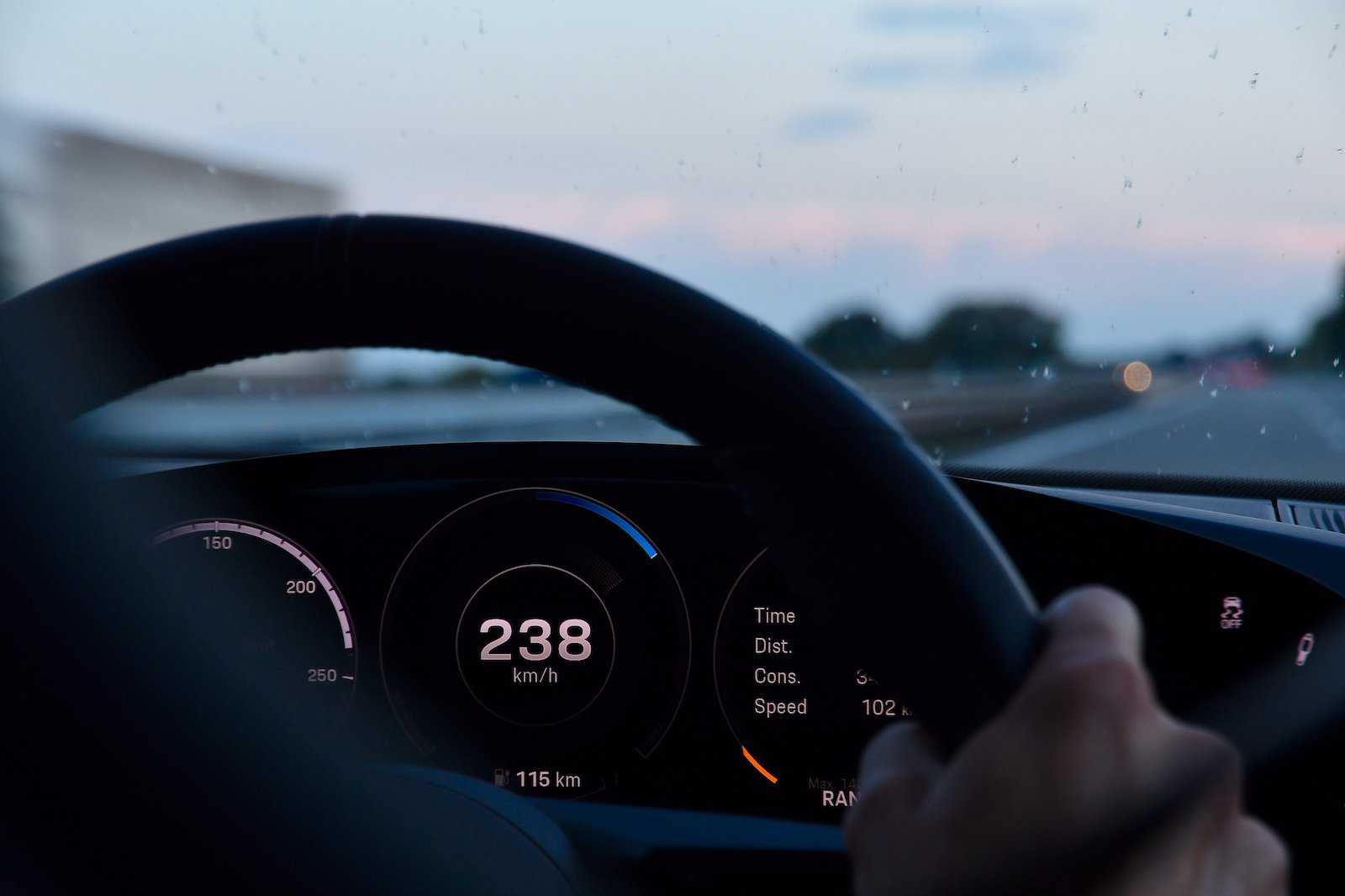 As we headed towards Germany, country number five, we decided to ignore that we were down on time by around 45 minutes and focus on the positives. This stage of the trip was one of our longest at 205 miles and the Taycan positively breezed it with more than a quarter of a ‘tank’ remaining.

This, combined with the accuracy of the range readout, allowed us to increase our cruising speed once again. And when we say ‘increase’, we effectively lit the afterburners. After crossing the Rhine at 9.01pm, it didn’t take long for us to hit our first section of derestricted autobahn, allowing us to cruise at easily double what we would be allowed to do in the UK.

This helped us claw back a good 20 minutes, as did a remarkably quick charge at Ionity Mahlberg. Unlike in France, all four chargers were available and as a result our charging speed was properly rapid, with a peak of around 250kW. After 30 minutes we were back up to 90% and ready to go; we barely had enough time to grab a coffee and some greasy food before heading off to country number six: Switzerland.

Next: The second half of our European road trip >>