Audi A1 named Car of the Year 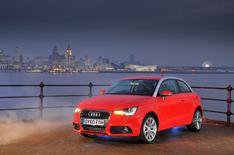 The Audi A1 was awarded the coveted What Car? Car of the Year accolade at the 34th annual motoring 'Oscars', the What Car? Awards, last night at a glittering ceremony at the Grosvenor House on London's Park Lane. The Audi A1, an all-new premium supermini, was named Best Supermini, too, while Audi also picked up the Best Coup award for the Audi TT.

Steve Fowler, What Car? editor-in-chief, said: 'If ever there has been a car that has hit the nail squarely and firmly on the head, the Audi A1 is it. It's the right car at the right time: a car that combines desirability and ability alongside frugal financials the perfect combination.'

'What's more, 12 months ago at the 2010 What Car? Awards, the A1 waltzed off with our Reader Award What Car? readers voted it the most exciting new car to be launched over the next year, and they were right. The Audi A1 is a car that will make owners smile for any number of reasons and will keep them grinning, as all great cars do.'

Jeremy Hicks, Director of Audi UK, commented: 'It's a tremendous accolade for the Audi A1 to receive the What Car? Car of the Year Award a title with such a strong and long-standing reputation. We know that the Audi A1 has been exhaustively tested and analysed by the entire What Car? team, and this makes us especially proud to receive this expert recognition.

'The Audi A1 is the first true premium compact car and it was already billed as the most anticipated car of 2010 by What Car?'s own readers. Despite its prestige positioning and obviously high build quality, the new A1 makes excellent financial sense by virtue of its low running costs, low insurance rates and exceptional, class-leading value retention. It's very rare to find a highly desirable car from such a sought-after brand that delivers class-leading affordability, and we believe it is this element that has persuaded What Car? that the A1 deserves its Car of the Year Award 2011.'

This year's Reader Award for the most exciting car to be launched in 2011 went to the new Range Rover Evoque, six months ahead of the British-built car's launch. Steve Fowler commented: 'Our readers have obviously taken to the Evoque and it's easy to see why. Its combination of style, quality and eco credentials have grabbed everyone's attention it seems car buyers can't wait for it to go on sale.'

British car makers did well at the What Car? Awards with the Land Rover Discovery winning the Best 4x4 Award for an amazing seventh year running, while Jaguar won the Best Executive Car Award for the fourth year running with the XF.

The British-built, all-electric, Nissan Leaf was awarded the new Ultra-Low-Carbon-Car Award, and was described by What Car? editor-in chief Steve Fowler as 'a slice of tomorrow's motoring today'.

Volkswagen was awarded the Small Family Car Award for the Volkswagen Golf 1.4 TSI 122 Match and also the Security Award in association with Cobra.

The Ford Mondeo 2.0 TDCi 140 Zetec picked up two awards for Best Family Car and Best Estate Car. Spanish car maker Seat picked up the Best MPV Award for the Seat Alhambra, while the Crossover Award went to last year's Car of the Year the Peugeot 3008.

Renault dominated the Hot Hatchback category with all three nominees, with the Mgane Renaultsport 250 Cup taking the overall prize.

Ferrari won its first ever What Car? Award the Ferrari 458 Italia beating the likes of Aston Martin, Audi, Lamborghini, Mercedes-Benz and Porsche to the Best Performance Car Award.

BMW picked up two Awards: the Z4 was named Best Open-Top Car, and the 3 Series took the Compact Executive Award.

The Mercedes-Benz S-Class was awarded the Luxury Award, while Volvo won the Safety Award for its Pedestrian Detection system.