More for you |
Which Audi A1 should I buy? Used test: Audi S1 vs Volkswagen Golf GTITaking your car abroad: tips for driving in EuropeHow to spec an Audi A12020 Audi A1 Citycarver review: price, specs and release date
Home
News
Audi A1 quattro driven
news

* Testing of four-wheel-drive A1 under way * Quattro version will be called S1 * Expect to pay more than £20k... 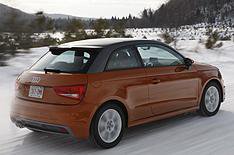 A four-wheel-drive version of the Audi A1 supermini will go on sale in the UK in around two years' time. It will be called the S1 and we've driven an early prototype of the car.

The test car we drove was fitted with a 182bhp 1.4-litre engine, but the final production S1 is expected to have at least 200bhp.

The four-wheel-drive system in the A1 is similar to that used in the A3 and TT. It uses clutch plates in front of the rear axle to distribute engine torque between the front and rear wheels. All torque is sent to the front wheels until they lose traction, at which point it is also diverted to the rear wheels.

The net result is a car that is sure-footed and fun to drive. Our test was on a short, snow covered route in Canada, but it was long enough to demonstrate the benefits of the A1's four-wheel-drive system.

The system is reacts swiftly and effectively, offering excellent traction and, even with this engine, providing plenty of driving fulfillment.

The car we drove was fitted with a six-speed manual gearbox, but the S1 is expected to get a seven-speed S tronic dual-clutch gearbox as standard.

When the S1 goes on sale Audi will have a quattro version of every car currently in its range. It hasn't released a price for the S1, but it is likely to be more than £20,000.

Meanwhile, Audi has no plans to build a hybrid version of the A1, saying that the marginal fuel benefits wouldn't outweigh the additional cost, making it unattractive to buyers.