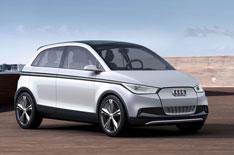 Audi has released more details of its A2 concept car, which will make its public debut at the Frankfurt motor show next week.

At 1150kg the A2 weighs roughly the same as an A1 1.4 TFSI. The A2s comparatively low weight for an electric car - has been achieved through a number of measures. Chief among them is a body constructed largely from aluminium, with addition carbonfibre-reinforced polymer (CFRP) elements.

The concept cars 18-inch wheels are made using cladding technology, where an alloy base is bonded to a separate cladding, giving a weight saving of around 2kg per wheel.

A 114bhp electric motor mounted at the front of the car - drives the front wheels. Peak torque is 199lb ft; Audi quotes a 0-62mph time of 9.3 seconds, and a top speed limited to 93mph.

The A2 concept has a maximum range of 200km (124 miles). Audi says that full charging takes 1.5 hours with a 400-volt current and around four hours using a 230 volt household current.

The A2 concepts styling hints at the original A2, which was produced between 1999 and 2005. It also incorporates Audis latest design language, so the rear end resembles the A1 Sportback concept cars.

The headlights use the latest LED matrix beam technology, using a combination of LEDs and microreflectors. The rear lights adapt their strength to the current lighting conditions, while the rear foglight uses laser diodes.

A dynamic light runs below the edge of the window line it acts as a continuous side marker when the indicator is activated. A red bar of light flows forward from the rear lights when braking.

The Frankfurt show car has a glass roof that switches from dark to transparent at the push of a button. When an electric current is applied, small particles in the glass align, blocking the suns ray almost completely to control the temperature inside the car.

Audi says that clever packaging means that as with the orignal A2 - theres still plenty of space for four people.

The interior has a dynamic light that arches across the dash, as well as control surfaces that fold up when the vehicle is started.

More details are expected to be released at the Frankfurt motor show.