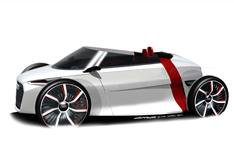 Audi has released details of another of its concept cars that will be on display at the Frankfurt motor show next month.

The Audi urban concept Spyder is a drop-top version of the concept car that was revealed last week. It has a wraparound glass area, but Audi says that the doors open diagonally to the top'.

Like the hard-top version, the Spyder concept is a city car designed for congested streets. The body is made from carbonfibre-reinforced polymer (CFRP) and has protruding wheels covered by protective plates. A red strip similar to the side blades on Audis R8 supercar stretches the height of the body.

The cabin has a 1+1 layout, with a passenger seat mounted behind and slightly to the side of the drivers seat. Theres no adjustment for the seats, which are integrated into the cars structure. The driver can adjust the steering wheel and pedals to get comfortable, though.

Drive comes from two electric motors, powered by a lithium-ion battery. Audi hasnt confirmed whether a production version is likely.