More for you |
What can I do about my faulty Audi R8? Used test: Audi R8 Spyder vs Porsche 911 CabrioletAudi R8 vs Porsche 911 TurboThe best car interiorsDeal of the day: Audi R8
Home
News
Audi R8 V12 TDi Study
news 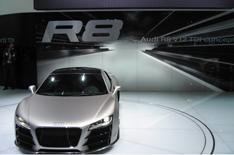 Audi set pulses racing when it pulled the wraps off its 493bhp diesel-powered sports car.

Bigwigs have described the car as a design concept, although few doubt it will go into production as the first true diesel-powered supercar after the rapturous reception it received in Detroit.

Called the R8 V12 TDi, it is, as its name suggests, a twelve-cylinder turbodiesel version of the acclaimed mid-engined R8.

All this is achieved with emissions that meet Euro 6 standards, which are not scheduled to come into force until 2014. That's thanks in part to new Bluetec technology, which breaks the exhaust gases down into nitrogen and water.

What's more, its diesel engine even offers relative frugality for a supercar - company officials revealed at the car's launch that it should achieve just under 24mpg.

Other features include three performance settings Dynamic, Sport and Race - which alter the engine, gearbox and suspension settings.

In Race mode the navigation system converts to a lap timer and gives information on the track being driven, as well as centrifugal force and boost pressure data.

The unveiling of the Audi R8 V12 TDi Study was quite a coup for Audi, because most insiders had predicted that the standard 414bhp R8 would be turned into a bona fide supercar with the addition of a V10 petrol-engine.

Whether that car is still coming is one of the unanswered questions, but with rumours also persisting of an R8 roadster going on sale in 2009, it's clear that the German firm plans to exploit the R8 franchise even further.

What can I do about my faulty Audi R8?

Deal of the day: Audi R8