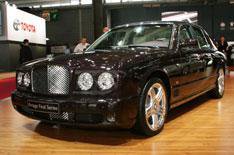 Bentley is bidding farewell to the Arnage in some style in Paris by unveiling a limited-edition model called the Final Series.

The car will be powered by the same turbocharged 500bhp 6.75-litre V8 engine in the regular Arnage T model. The gearbox, chassis and running gear will also be identical.