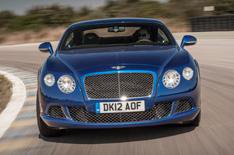 It's powered by a 616bhp 6.0-litre W12 engine, which blasts the car to 60mph in just 4.0 seconds, while 100mph is reached in 9.0 seconds. Acceleration is aided by a new eight-speed gearbox and reworked engine-management software.

The GT Speed's suspension is lowered by 10mm compared with the standard GT, while it also gets a stiffer set-up and upgraded anti-roll bars.

Buyers will also get the cost option of upgrading to carbon silicon-carbide brakes, which are 20kg lighter.

The GT Speed sends power to all four wheels, with a 60/40 rear/front bias.

Bentley Continental GT Speed will blast from 0-60mph in just 4.0 seconds and on to 205mph

Bentley says it has improved overall efficiency by 12%, helping the GT Speed to achieve average economy of 19.5mpg, with CO2 emissions of 338g/km.

The new eight-speed gearbox will also be fitted to the standard Continental GT and GTC models, resulting in improved performance for both cars; the GT hits 60mph in 4.3 seconds, while the GTC takes 4.4 seconds.

The GT Speed is available to order now, and the first cars will be delivered in October.

The Continental GT Speed gets extra interior chrome detailing as part of its 151,100 pricetag