* Luxury SUV has green light for production * Set to be most powerful SUV in the market * Scheduled to go on sale in 2016... 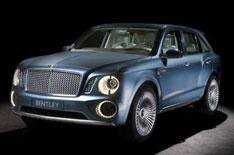 Bentley has revealed that it is proceeding with development of a luxury SUV with production planned for late 2015, and an on-sale date in 2016.

Since then, the styling has been reworked a Bentley source previously told What Car? that the EXP 9 F's styling was considered 'a little heavy handed'. The revised concept car will have 'more traditional SUV proportions and less retro surfacing'.

Rumours that production of the Bentley SUV could be based in Slovakia have been quashed, with confirmation that the new model will be built at Bentley's UK factory in Crewe.

The SUV will be the fourth model line to be produced at the Cheshire factory, joining the Continental GT, Flying Spur and Mulsanne.

Bentley's new SUV has been designed with customers in China, Russia and the Middle East firmly in mind, with a long-wheelbase configuration to give it limousine-like rear legroom.

The EXP 9 F concept car was fitted with Bentley's W12 petrol engine and an eight-speed automatic gearbox. The production version is likely to launch with the same set-up, and should have around 600bhp Bentley says the new car will be 'the most powerful SUV in the market'. The company's new V8 petrol should also be on offer.

It is also expected to be available as a diesel, using an engine from another VW Group brand, as well as a hybrid model. The production version of the new SUV is likely to cost from around 150,000.