* News from Detroit motor show * New metal from outside US * Read our show review... 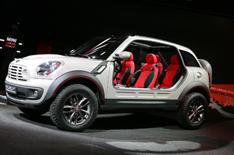 The big ideas came from outside the US. One of the most interesting was the Toyota FT-CH, a study for a possible baby Prius. Toyota admits it wants to extend the Prius family and has plans for eight new hybrids to push annual production of them up to a million a year. The FT-CH has a good chance of being included.

The Germans were out in force, as usual. BMW had three new offerings a high-performance Z4 roadster badged sDrive 35i, an electric 1 Series that will soon start trials using the powertrain already on test in the battery-powered Mini, and the Mini Beachcomber concept, a reinvention of the Mini Moke and Citron Mehari that were available as holiday hire cars in just about every Mediterranean resort in the 1970s.