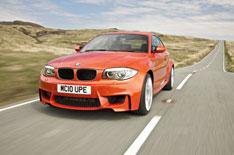 Can a car ever be too good? Too quick? Some people think so, and cite BMW's M cars as an example. These models generate so much performance and grip that they need to be driven at incredibly high speeds to really appreciate them. The new 1 Series M Coupe is a bit different, though.

On the surface it doesn't appear to represent much of a sea change in the M Sport philosophy. It's based on the humble 1 Series but with wider wings, a deep front spoiler and side skirts, and lowered ride height. Underneath, many of the important bits have been cribbed from the M3.

The M Coupe's motor has plenty of puff, too. The 3.0-litre twin turbocharged six-cylinder engine produces a walloping 335bhp and 332lb ft of torque. What's more, that power is delivered in great big turbocharged gobs and to the accompaniment of a raucous exhaust note, which is a pretty addictive cocktail.

There's also loads of grip, so you can throw the M Coupe into corners with confidence, and the super-sized brakes mean you can scrub off speed like you've driven into a swimming pool. So far, so typically M Division.

The difference with the M Coupe is that it has a balance and interactivity that allow the driver to really engage with it at merely brisk speeds as well as banzai ones. That's unusual in an M car and welcome.

Much of this is down to the suspension, which is taut enough to keep things level through bends but also has just enough give in it to let the car move around and communicate whats happening beneath it.

It's a heady mix. Then you look at the price and it's clear that not everything has changed at BMW. It's a whopping £40k, and extras that you'd expect to be included cost more including £2000 for satellite-navigation, 515 for metallic paint and an eye-watering £545 for Bluetooth connectivity.

Still, as quick as the car is, youll have to be even quicker: there are only 450 earmarked for the UK, and half of those are already sold.