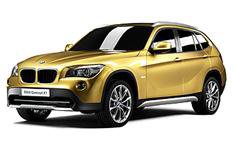 This is the BMW Concept X1, which closely matches how the X1 baby 4x4 will look when it goes on sale early next year.

The X1 is aimed at buyers who want a high--up driving position and on-road performance rather than off-road ability.

It does have a part-time four-wheel-drive system, though, which moves power to the front wheels when required, and will use traction control to move power between the wheels.

Launch engines will include a 170bhp 2.0-litre petrol unit and a 177bhp 2.0-litre diesel. Later on, less powerful versions of the same engines may be introduced to the range, as well as more powerful units.

A hybrid version of the X1 could be added to the range at a later date.