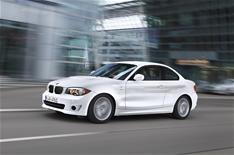 BMW will launch its second real-world electric car trial this year by leasing more than 1000 battery-powered 1 Series Coupes in China, Europe and the USA.

Called the ActiveE, the full-electric car will make its first appearance at the Geneva motor show next month and hit the roads in the hands of everyday motorists later in 2011.

Data will be automatically collected from each ActiveE car and fed back into the development process of the Megacity electric car, which BMW will launch in 2013.

The ActiveE has a 168bhp electric motor, which can take the car from 0-62mph in nine seconds and on to a limited top speed of 90mph. The car has a range of 100 miles and can be fully recharged overnight.

Unlike the electric Mini E, which BMW has already trialled, the ActiveE has an intermediate throttle pedal position that allows the car to coast. Usually, electric cars brake when the driver lifts off the throttle to recapture energy for the battery, something the ActiveE can still do to extend its range by 20%.

Besides a lack of exhausts, the ActiveE looks identical to any other 1 Series Coupe, although boot space is reduced from 370 to 200 litres.

If the Mini E trial is anything to go by, prospective candidates for the ActiveE will pay at least 330 a month to lease the car. They may also need to have a garage or driveway and live within an as yet unspecified area of the country to be eligible.