* Opens today at Birmingham University * Station forms part of research project * Could be 12 stations by 2012... 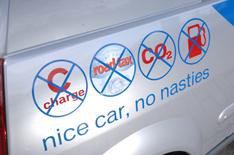 The cars are part of the university's own fleet of vehicles, and will allow engineering researchers to learn more about their efficiency and cost-effectiveness.

Professor Kevin Kendall, lead investigator from the Department of Chemical Engineering, said: 'By comparing the hydrogen-powered vehicles directly with the University's petrol and diesel fleet, we can find out how vehicles will need to be adapted to make hydrogen an attractive and cost-effective option as a future fuel.

'Once we have gathered enough information about the viability of hydrogen-powered cars, we will be working alongside Birmingham City Council to establish whether a hydrogen-powered fleet would be practical for their waste, transport and other vehicles, and how this transition could be managed.'

Three other hydrogen fuel stations will be opened by Transport for London next year for a fleet of 70 hydrogen-powered vehicles it is introducing.

Further growth is expected, with perhaps 12 hydrogen filling stations around the UK by 2010, raising the possibility of commercial production of cars powered by fuel cells.