More for you |
The 10 fastest-depreciating cars 2021Most reliable small carsBest cars for less than £150 per monthBest and worst city cars for reliability2017 What Car? Reliability Survey
Home
News
C1, Aygo and 107 suffer NCAP star loss
news 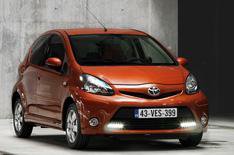 Safety organisation Euro NCAP has stripped a star from the crash-test ratings of the Citroen C1, Peugeot 107 and Toyota Aygo as a result of its latest round of tests.

The trio have been downgraded from a four-star rating to three, with the latest tests taking place after a mid-life face-lift for the cars.

Euro NCAP said that the downgrading was due to the cars not offering side impact airbags, or electronic stability control as standard.

The cars previous four-star rating was awarded in 2005, but recent cosmetic changes to the cars resulted in a retest.

The tests have become more stringent since 2005, with cars needing to offer stability control as standard across the range in order to get a maximum five-star rating.

As a result of the tests, Citroen, Peugeot and Toyota have committed to offer side thorax and side head curtain airbag, stability control, a passenger seatbelt reminder and Isofix as standard by July 2013.

However, this is not going to improve the cars scores because Euro NCAP conducted the tests with the additional equipment fitted in order to encourage the manufacturers to add it as standard.

Dr Michiel van Ratingen, Euro NCAP secretary general, said: 'With this non-standard equipment fitted, the Aygo achieves a three-star result without it, the rating would probably have been much worse.'