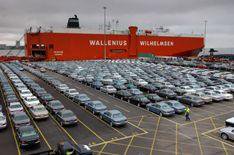 The PSA Citroen group has become the latest manufacturer to cut production.

Although exact numbers haven't been given, PSA chief executive Christian Streiff said by cutting production the company would avoid a surplus of cars building up.

'Massive production cuts will be made in the fourth quarter, as it is vital that we are correctly positioned to face 2009,' he said, after reporting a sales decline of 5.2% in July- August 2008.

Renault also issued a warning about its profits in 2008, saying that slowing sales in emerging markets would make 2009 a difficult year.