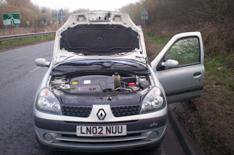 Carl Elliot contacted What Car? after his MkII Clio's bonnet flew open while he was travelling at 50mph.

He says: 'It caused my windscreen to crack and reduced visibility to zero. I managed to come to a safe stop, although my rear-view mirror had turned round from the impact and the overhead lights had fallen down to obscure what little view I had left.

'Luckily, although this is normally a busy road, there was no other traffic and I was able to get out of the vehicle. It is frightening to think about what could have happened if a lorry had been right behind me. I don't think I would be here.

'I am a conscientious driver, and after closing a bonnet, I always pull it up again to check that it is secure. This is what I have done with all my cars in the past, with no problems.

'I am sure there's nothing in the manual about the driver keeping the catch maintained or having to check it regularly, but I'm under the impression that Renault has now added it.

'I have been asked by my insurance company to ask the inspector if the damage was caused through neglect, failure to close the bonnet correctly or through manufacturing error.'

Renault's response
'Renault UK received contact from Mr Elliott saying that the bonnet of his MkII Clio had opened while the car was being driven.

'Mr Elliott advised Renault UK that he had opened the bonnet of his vehicle approximately five minutes before the incident to top up his washer fluid.

'We were not able to send a letter to Mr Elliott, because the registered keeper's details for this vehicle came back as 'unknown' from the DVLA.

'Renault UK referred Mr Elliott to his insurers and have received no further contact.'