More for you |
Used test: BMW 1 Series vs Mercedes A-ClassNew Dacia Bigster large SUV – what we know so farNew issue of What Car? magazine on sale nowThe most popular used car reviews of 2020LISTEN: Car of the Year Podcast
Home
News
Caterham and Renault in sports car deal
news

* Alpine and new Caterham sports cars will be built * Cars will be made in France * Models on sale within three or four years... 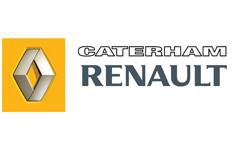 The Alpine sports car brand is set to return within four years, thanks to a new deal between its owner, Renault, and British manufacturer Caterham.

Alpine is one of the most celebrated names in European sports cars, and it still has a considerable following in France. However, its last car, the A610, sold in tiny numbers and ceased production in 1994.

Caterham, on the other hand, has enjoyed a strong period in recent years because it has focused on selling a range of open-top cars with direct lineage back to the original Lotus 7.

It's thought the deal was struck through links forged between Caterham's Formula One team and Renault, its engine supplier.

No details have been released on potential new models, although they are likely to feature common mechanicals including many parts sourced from the Renault-Nissan group but different bodywork and chassis set-ups.

Renault's COO, Carlos Tavares, said: 'Our ambitions of reviving Alpine depended on our ability to find a partner to ensure the profitability of such an adventure. Today we can enter a new phase: the design of a car that will embody the very essence of Alpine, a vehicle that will rekindle sporting passion once more. It could become a reality within the next three or four years.'

Caterham Group chairman Tony Fernandes said: 'If you look at F1, there is only Ferrari and McLaren. Both are very expensive. We will produce a car with F1 technology that people can afford.'

The deal secures the future of the former Alpine factory at Dieppe in France. In recent years it has been the development and manufacturing home for Renaultsport but with production of the hot Megane already transferred away from the site, and the next Clio likely to suffer a similar fate, the facility had been facing an uncertain future.

The first cars will be made within the next three to four years, however Caterham's Technical Director Mike Gascoyne believes concept cars will be along much sooner.

'The project is well advanced,' he said, 'but I'm here to bring a little bit of Formula 1 to it, and we don't take three years, we do it a bit quicker than that.'