More for you |
The 10 fastest-depreciating cars 2020Used hybrids: BMW 5 Series vs Volvo S90What is a Cat A, Cat B, Cat S or Cat N write-off?True MPG: most efficient hybrid carsWhy I haven't bought an electric car yet - reader opinion
Home
News
Child seats cheaper could be safer
news

Child seats cheaper could be safer 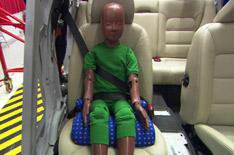 Cheap child seats can give your children more protection than models costing twice as much, according to preliminary tests by the Transport Research Laboratory (TRL).

Using its newly developed five-star Child Seat Rating Scheme, which involves crash-testing seats and assessing their ease of use, TRL gave a seat costing 39.99 a four-star rating and another costing 89.95 just one star.

None of the seats in TRL's preliminary tests have been named because the results are designed to show how the rating system will work when it is rolled out later this year.

The test will make comparative point-of-sale information showing the relative performance of seats available in shops for the first time.

The test puts each seat through a frontal and a side impact, and also evaluates how easy they are to use, because an incorrectly fitted seat offers less protection.

TRL's demonstration tests were all carried out on typical entry-level Group 0+ seats for infants costing 100 or less. The first official results are expected to be announced later this year.