More for you |
DVLA warns of 20% increase in car scamsWhat Car?'s top 10 used electric cars (and the one to avoid)10 most unreliable SUVsWhat Car?'s best cars for less than £250 per monthGuaranteed discounts on our 2020 Award winners - save up to £19,366
Home
News
Chrysler eco concepts
news 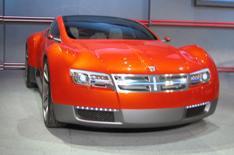 Maybe Chrysler was feeling guilty about launching the Dodge Ram pick-up the previous day, because it certainly tempered its potential average carbon dioxide output with the three concept cars it is showcased in Detroit.

They are the Chrysler EcoVoyager, Dodge Zeo and Jeep Renegade, each designed to appeal to a separate, carefully defined section of society and give economy equivalent to more than 100mpg.

Nobody expects them to go into production in their present form, but their creation by Envi, a special environment-focused division within Chrysler, was a strong statement of intent.

EcoVoyager
The EcoVoyager has been designed with elegance and simplicity at its heart, in order to appeal to buyers with families.

It is described as a living room on wheels, with features including a panoramic roof, front and rear doors that open 90 degrees, without a B-pillar separating them, and four individual chairs.

The EcoVoyager is powered by a hydrogen-powered fuel cell with a 200kW motor that sits beneath the floor and drives the front wheels.

Chrysler claims the car has a range of 300 miles and a 0-60mph time of less than eight seconds, with consumption the equivalent of 110mpg of petrol.

Significantly smaller than the Voyager MPV, speculation has already begun that it may actually show how the next generation PT Cruiser could look.

Dodge Zeo
This 2+2 coupe is targeted at driving enthusiasts.

It has electric power only, with lithium-ion batteries powering the 200kW motor and giving more than 250bhp at the wheels. Built from aluminium, it travels from 0-60mph in less than six seconds.

Despite these performance figures, it has a range of 250 miles and average fuel economy equivalent to 130mpg of petrol.

Dodge describes the Zeo as 'a muscle car for the 21st century', and its 23-inch wheels and scissor doors do little to persuade you otherwise.

Insiders concede some aspects of its design could preview a supermini that is lacking from the company's range.

Jeep Renegade
Nowhere is the pressure on car manufacturers from green groups greater than in the 4x4 sector, and Jeep has responded with this lightweight concept car.

The aluminium-bodied two-seat 4x4 is powered by a new small-capacity Bluetec diesel engine in combination with battery pack, returning the equivalent of 110mpg. It can travel 40 miles on battery power alone and 400 miles in total.

Adding to its environmental credentials, the bodywork and interior are made from what Chrysler describes as 'mostly sustainable materials'.

With its hose-clean styling, this is essentially a dune buggy, but it is reported to feature styling touches that are being considered for the next Jeep Wrangler.