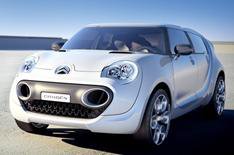 Citroen will show off its C-Crosser concept car at the British Motor Show next month.

The C-Cactus is intended to showcase Citroen's eco-developments. It's powered by a diesel hybrid engine, which means the car can return 83mpg and emit 78g/km of carbon dioxide.

The 70bhp diesel is linked to a 30bhp electric motor. In town, the car uses the electric motors only, meaning no CO2 is emitted. Top speed is restricted to 93mph.

It's not only the engine that Citroen has been developing to be greener - the whole car is intended to save weight and, therefore, give the engine less work to do, which cuts emissions.

Only half the components typically used in a car have been installed, with many parts having multiple functions.

For example, the ignition key is also an MP3 player, and the dashboard has been replaced by a central console that controls functions such as the loudspeakers, gearbox controls and satellite-navigation system.

All these weight-saving measures will help keep the price of the car down, too, says Citroen.

• You can see the C-Cactus at Citroen's stand (S11) at the motor show, which runs from July 23 to August 3 at London's ExCel centre. Come back to us nearer the time for more on the show.