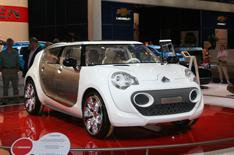 Taking centre stage on the Citroen stand is a show star of the (recent) past.

We first saw the quirky C-Cactus at the Frankfurt motor show last year, but this is the first time the car has reached these shores.

The weight - and consequently price - of the C-Cactus has been kept down by using only half the components typically used in a car.

That has led to many parts having multiple functions: the ignition key, for instance, is also an MP3 player, while the dashboard has been replaced by a central console that controls functions such as the loudspeakers, gearbox controls and navigation system.

In addition, many parts - including the windscreen, windows, door panels and tyres - are made from recycled or recyclable materials.

Elsewhere on the stand are relatively new additions to the Citroen range that you may not have seen in the metal yet, such as the new Berlingo Multispace and the not-quite-so-new C5 and C6.

There's also a surf-themed C-Crosser, but the less said about that the better.