* Co-development begins between companies * Baby Boxster and R4 expected to be first product * Speculation on hybrids and electric cars... 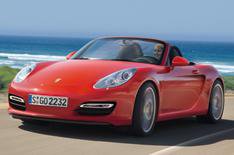 The VW Group and Porsche have begun work on co-developing more new cars, a source has confirmed to What Car?.

The first product of the collaboration is widely expected to be a new 'baby' Porsche Boxster and the Audi R4. The two will share a new steel and aluminium platform, but have sharply different characters as they will be powered by different engines.

The baby Boxster has been dubbed the Porsche 356, and would be mid-engined and rear-wheel drive. It could go on sale by 2012. Power would come from a new forced-induction flat-four engine that is currently under development.

The Audi R4 mid-engined sports car would have the same layout, and likely look similar to the e-tron concept car that was also shown in 2009. Because of its light weight, reports suggest it could deliver sportscar performance even with a relatively small 1.4 turbocharged engine.

Other projects the two sides are said to be working on together include the development of hybrid and electric vehicles.

VW and Porsche merged last October, but even prior to their merger they shared development of the Touareg and Cayenne 4x4s a programme that VW estimated saved it one-third of its development costs, and which gave Porsche its most profitable model.