More for you |
Jaguar E-Pace vs Jaguar F-Pace: which is best?It it right for dealer to keep a used car's registration document for months? Will my car be able to run on the new E10 petrol? UK’s first electric car charging forecourt to openBMW X7 long-term test review
Home
News
Contemporary design
news 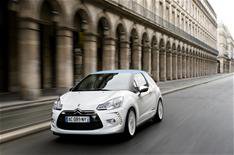 So, instead of attempting to reinvent a classic, the DS3 English designer Mark Lloyd has set about creating one, by giving the three-door supermini a chic, contemporary design, albeit adorned with the DS emblem which famously sat on the technical tour de force luxury car of the 1960s.

Obviously, the prominent dorsal-fin rear pillar, wraparound rear window and 'floating roof' are the most striking features, but if you look more closely you'll notice the way that dramatic fin subtly collides with the rear wheelarch bulge to give a shark-like side profile.

The fishy theme continues with a gaping mouth emblazoned with the Citroen double chevrons, and gill-like slashes in the front bumper that house LED daytime running lights.

The floating roof is the talking point, though. Matt black uprights separate the main body colour from the contrasting hue of the roof panel in a design flourish that works well. It's also an area where prospective buyers can express their individuality.

You need only log on to the DS3 microsite or nip into your local dealer and you'll be able to access 3D software which lets you select myriad colours or patterned roof designs that can be viewed in life-like detail. Once you're happy with your artwork, it can be added to your chosen DSign, DStyle or DSport specification and instantly hotwired to the factory for production.