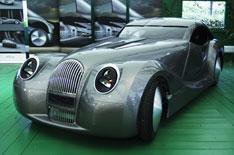 So eco-driving is dull driving, is it?

Not according to Morgan, which is showing off the Life concept car that made its debut at the Geneva motor show earlier this year.

'It may come as a surprise to many environmentalists, but sports cars have the potential to be among the greenest of cars,' says Morgan's Hugo Spowers.

The Life is a fuel cell-powered electric sports car. Four stacks of fuel cells convert hydrogen into electricity to run a super-efficient motor/generator attached to each wheel.

Energy recovered in braking is stored in ultra-capacitors rather than batteries, and performance is estimated to be equivalent to a 150mpg petrol engine.

With a top speed of 85mph, a 0-60mph time of less than seven seconds and a 250-mile range, it's not hard to see why Morgan considers its car to be green and exciting.

'Sports cars are designed and built on the principle of weight reduction,' says Spowers. 'This is not normally the case for saloons, however sporting they may be. Generalist vehicles are competent in many areas, but excel in none.'