More for you |
The best large SUVs in 2021Most (and least) reliable luxury carsWATCH: 2021 Mercedes eSprinter van review with Edd China2021 BMW 128i review: price, specs and release dateUsed test: Hyundai i10 vs Kia Picanto
Home
News
Down to... Mercedes A-Class
news

Down to... Mercedes A-Class 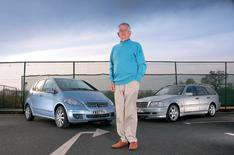 John said: 'Out of habit, when I sit in any car, the first thing I do is fish around for the lever to push the driver's seat back as far as it'll go. I was taken by surprise by the A-Class because I had to readjust - I was actually too far away from the pedals, which was a novelty.

'The upright driving position was great. My backside was in line with my knees, rather than below them as it is in the C-Class. Ergonomically, it made my C-Class feel old-fashioned. Getting the grandchildren in and out was simple.

'However, the huge blind spot caused by the low rear-view mirror meant that I had to bob around for a better view at every junction.

'I'd expected the decent controls and impressive drive from this Mercedes, but I'm not convinced the quality of trim is as high these days. All round, I was impressed, but not converted. I'm sticking with my luxury bus for now.'

We say
The A-Class is a great choice as an upmarket, easy-to-live-with car for taller people. It's shorter than most superminis, but dinky proportions hide a cavernous cabin - the flat floor and high seating position mean that four six-footers can travel in comfort.

It's an ergonomic hit but, although the boot is big for the size of car, it may not be large enough to suit all families.